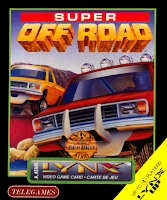 Very few games excited me more than seeing ‘Super Off Road’ get an official release on the Lynx. All you need to know in this racing title is that you have a car, it’s fast, and you get to race it across many awesome looking dirt tracks in a kind of “top-down” visual perspective. It’s a game that has been brought out on many consoles, and it became one of those “classic” titles that Telegames has released for the Lynx system (see ‘Double Dragon’). Sadly, it suffers from some fairly crippling issues which, in all honesty, really should have been ironed out before the game emerged.

Let’s get some clear positives out of the way first. ‘Super Off Road’ looks and sounds GREAT. The graphics are just how you would remember the game on any other system; the Lynx does a great job of replicating both the colours and the design mechanics of the original game. All the vehicles are visible at all times on the track, and you have some striking visual touches as well as a crowd watching the whole shebang. And behind it all is a nice set of musical tracks, and some decent in-game sounds to round out the audio experience. If I had any criticism of the sound area, it’s that it could have done me with some more digitised effects to liven things up. But then, meh... the audio matches the in-game action with clear aplomb, so who’s criticising?

The game gives you a lot of options in terms of how you play it. You get to choose your name initials, and a number of key car features; ie. do you want to buy some extra nitro? (Speed boosts) Want upgraded shock absorbers? Tyres? You can buy it! And the more money you win (or find lying on the track in moneybags a la ‘Hydra’) the more you can buy for the next race. The idea of purchasing updated machinery for your little gunner of a car is always appealing. It’s a dynamic that always works for me; it reminds me of the awesome ‘Rock and Roll Racing’ on Super Nintendo, a game not dissimilar to this one.

So all of these really good pluses make the in-game controls... that much more disappointing. Look, I must say: things look EXTREMELY promising until you start the race, and then it’s... agh! The car animation is not as smooth as it should be (choppiness is evident) and turning your car is a mini nightmare. The turning circle is wide and slow, and even worse, you get stuck on the scenery REALLY easily. A lot! All it takes is one moment getting stuck (and trying to wiggle your way free) and that could be the thing that loses you the race. Funnily enough, I did at least laugh when I saw a computer controlled opponent unable to remove himself from a group of hills, fumbling with its own controls. But the other cars just zoom straight past with near controlling perfection, firing off their nitros in the right places and constantly lapping you. It’s pretty disheartening to see this happen time and time again. Frustration becomes increasingly an issue.

The use of nitro is a good way to try and beat the vehicle rat race and inevitable pileups; unfortunately, actually using it causes your car to become temporarily invisible behind a black cloud, only to shoot out far away in your visual view. This makes the whole exercise of speeding up dangerous to control or turn properly in the heat of the race. You can only do it in straights, and only if you know the track like the back of your hand. And yet... you get the feeling you NEED these power-ups just to make the podium and actually place! Winning just one race will take controlling near “eliteness”; I salute you if you are able to do it consistently, because it’s not easy. I think with repeated races, one after another, a player could possibly master this game and the various twists and turns. But getting to that point is going to take more endurance than enjoyment, in my view. If the game was much smoother in animation and controls, and if the scenery didn’t hinder you as much as it did, then yeah; it would be great fun to conquer. But as it stands, there’s just this feeling that the game could have done with a lot more pre-testing. I haven’t mentioned how colliding with other cars generally affects your own car more than the CPU controlled vehicles, and how unfair this feels. But you can see where I’m going with this.

In the final analysis, I have to say that within this game is an absolutely awesome and mind-blowing experience that went sorely missing due to poor controls and collision detection issues. I won’t lie; I played this game a lot to see if I could salvage the experience somewhat, to see if there was any additional elements that would improve it. But other than the excellent visuals and sound, the game itself is far too difficult to play or control, and the odds stacked against you “opposition-wise” seem way too severe. I give the game a low pass for being so well presented, for capturing the essence of the original, and for being mildly fun as an occasional “try and win” racer. But I’ll get my racing thrills elsewhere on the Lynx I think. My thoughts are that this game is strictly for the fans... and collectors like me, of course!