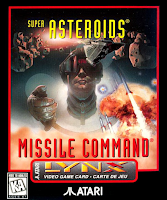 I don't have to tell anyone how classic 'Asteroids' and 'Missile Command' really are. You will usually find both of these early titles on any "greatest games of all time" games list; if they’re not there, they probably should be! There are many versions of these games, but you will most often find them associated with an Atari console. Well, in a brilliant continuation of tradition, placed in a value-packed "double-whammy", the Lynx received both of these retro classics at once, together on one cart! Not only that, but the games are richly enhanced with new features that aren’t “game changing” enough to spoil the fun of purists. Rejoice, early gaming fans!

In case you don’t know, ‘Asteroids’ and ‘Missile Command’ are two (ancient!) arcade games, both involving different space missions. The first, ‘Asteroids’, involves controlling a space craft while shooting all the asteroids in each galaxy, before moving on to the next galaxy. ‘Missile Command’ puts you in control of a space station anti-missile system, where your job is to shoot at downward approaching lasers that threaten your defence structures and your planet. These two titles really do fit well together in terms of gameplay and content; so to explore them further, I’ll try to explain why that is in the course of this review.

Graphics. Let’s be honest, ‘Asteroids’ and ‘Missile Command’ were never “super flash” in how they looked visually on other systems. But the Lynx more than meets the challenge of keeping things clean, fresh and graphically appealing. ‘Asteroids’ puts you in charge of a simple little ship that is not much more than triangle, but the craft animation is silky smooth, and level transitions are brilliantly classy. The asteroids themselves are big, smoothly scrolling, and they go “bang” when they are shot - with rich explosions! Small stars will occasionally appear on-screen, with various power-up abilities; an addition not unwelcome! Cute enemy spacecrafts will also try to spoil your day, but you’ll laugh when they too are victims of the mighty asteroids - KERBLAM! As soon as you are hit with the visual movement of the space rocks in ‘Asteroids’, you will realise they nailed the physics of the original. And that’s truly a good thing.

As for the visual appearance of ‘Missile Command’, things are also kept simple but effective. Enemy spacecrafts make an appearance in this title as well, but the most striking visual element is the presence of the multi-coloured lasers raining down on you. The visual effect is a little hard to describe, but it’s more like a gentle gradient of colours, which are distracting (in a good way) while you play. Your main weapon is a series of little fired pixels, but the explosions they create are very nicely presented. You get the feeling game designers spent the most time on the visual quality of ‘Missile Command’, rather than ‘Asteroids’; but this certainly doesn’t take anything away from the clean, sci-fi quality of ‘Asteroids’.

The sound in both games is fairly straightforward. There was definitely room here for something really atmospheric… something ambient and techno. Even as an option guys, come on! But sadly, there is only a variety of effects. The good thing is that the various bleeps, explosions and gunfire noises are both suitable as well as appropriate to the game. I did like the introductory music on the title screen, so the hunger for more was natural. The space titles on the Lynx have tended to feature some pretty impressive soundtracks; ‘Zarlor Mercenary’ stands out, for one. So the lack of music did irk me, but not enough to put me off.

The controls on both titles are, thankfully, set just right. And they really needed to be. These are classic games that don’t require a lot of complex moves, but they do need quick reflexes. Each game responds well to button presses and speedy moves. In ‘Asteroids’, particularly, you need to be rapid in your movement to avoid the various enemies and meteorites flying around, and the ship handles just how I would expect it to. I’d say ‘Missile Command’ is the more challenging to control, purely because it’s “cursor driven” in how you must target the lasers above you; and that’s hard with a d-pad (‘Lemmings’ has similar issues). But this only makes you practice more, so that you can get used to the interface. And really, it’s a very good interface overall that doesn’t tend to frustrate.

So are there any downsides to this title? Well, obviously the purists are not all going to enjoy the new add-ons to the title, because they do complicate what were very simple game designs. And like ‘Robotron 2084’, this is a game that you won’t necessarily play for long sittings. It is, after all, a title that is meant to challenge you and defeat you in as little time possible, which only thorough practice can mitigate. But even though each game is tough, and even though the various levels don’t vary much in appearance, the game itself is lovingly presented in it’s simplicity, and certainly looks like it was created with more care than many other Lynx titles. In other words, there’s a respect for the source game, but the willingness to be visually adventurous; a good combination!

It’s impossible not to close this review without addressing the elephant in the room, which will concern most retro gamers; namely, “how pure are these titles when compared to the original?” and “how do they really compare?”. From a personal perspective, I love the new additions. Adding a shop to ‘Missile Command’ (to buy useful items) and placing power-ups in ‘Asteroids’ really did enhance the game overall for me. I feel the original is given a nod, but the updates suit a wide audience. ‘Super Asteroids / Missile Command’ is still an arcade game where you must “get as far as you can”, with only a few lives and no passwords; but it has more complexity and even added strategy as a result of new additions. Because your ship in ‘Asteroids’ has a life bar, you have to consider whether it’s worth the risk grabbing the “screen-clearing star” when you have super low health, all while asteroids fly dangerously around. To me, that makes the game as tense as the original!

Overall, I think ‘Super Asteroids / Missile Command’ proves that you CAN update an old classic with new features without losing the essential essence of the games themselves. I know not everyone will agree with me on that. Messing with the formula of a classic is a dangerous game, and we have seen it go wrong before. Thankfully, ‘Super Asteroids / Missile Command’ gets a lot right, from the respect of the original visuals to the intriguing additions to the game. It’s a great “pick up and play” cart, and excellent for the airport, lounge… or the Lynx cave! Simply put, this game should keep the outer space retro fans smiling, whether they played the original games or not. And that’s all you can really ask for. Keep on blastin’!