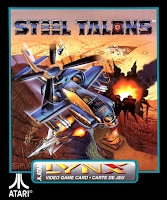 Atari Lynx flight sim games have largely been of high quality: especially titles like ‘Warbirds’ and ‘Blue Lightning’. So the expectations are naturally high for this coin op conversion of the arcade classic ‘Steel Talons’. Haven’t heard of it? It wasn’t as well known as, say, the ‘Rampage’ and ‘Ninja Gaiden’ arcade machines of their time (both also converted to Lynx games). But it was prominent enough to port to Atari’s snappy handheld. What is the game about? It’s essentially a war sim shooter, where you pilot a helicopter over diverse terrains and complete each of your 12 missions. So, the big two questions are, how does it play, and does it sit on the same podium as other Lynx shoot ‘em up releases?

The visuals of ‘Steel Talons’ remind me a little of ‘Hard Drivin’. As I said in that review, bring on those polygons; I love ‘em! It’s kind of strange that this game came out after ‘Blue Lightning’, because you could argue that ‘Blue Lightning’ is graphically better than this game. Still, what you see in this title is visually quite good. Due to the nature of the graphics engine, you get to see mountains, rivers, trees and other surroundings below you, and they scale well as you pilot your copter closer to them or further away. The very cool difference between this game and ‘Hard Drivin’ is that you get to truly explore these surroundings your own way, turning your craft a full 360 degrees if you like. In fact, this is an essential gaming mechanic, because the missions you enter into involve taking down targets based all over the map. The look of the sprites, including your own craft, are nice but also simple. The accessible map during each level also gives you a nice representation of the in-game areas, and helps you know where you are and where to go next. Well played!

Sound-wise, we get some nice military-style intro music and some progress jingles throughout the game, but nothing “in-game”, so to speak. Like ‘Desert Strike’, the main action is just about the sounds of the chopper, the guns blazing and the explosions. That’s not so bad though, really. As I said in the ‘Desert Strike’ review, there’s no real appropriate music for this kind of sim anyway; you need your wits and concentration at all times. I’m sure a ‘marchy’ digitised track would have been nice, but the arcade game didn’t have in-game music either. You will need to listen out to your warning radar though, because it will tell you when enemies have spotted you. If they do, heads up soldier! Get your ship outta there!

Control-wise, there are some issues. The game is actually pretty slow loading and slow moving. Terrains gradually appear under you, or sometimes pop up unexpectedly. The vehicle feels sluggish sometimes, though it is nicely animated. It’s hard to know if there is also a bit of slow-down (lag) but the game isn’t fast moving; so it’s a little hard to tell. Perhaps there’s just too much going on programming-wise. Firing your gun is easy though, and manoeuvring the ship is okay; as long as you can get over the above mentioned control issues. Given that it’s a military strategy game, slowness isn’t totally a bad thing in some ways. But the game would have been markedly improved if it were at least 30 percent faster.

The difficulty of the game is set pretty well. It’s one of the real pluses of ‘Steel Talons’. The game will rank you depending on how well you complete the missions, and they aren’t easy to complete either. So the challenge level is set high. There are 12 missions all up, and they are all different in look and feel; so you certainly get bang for your buck. I wouldn’t say the game “flows” as nicely as ‘Blue Lightning’ or ‘Desert Strike’. By that I mean it doesn’t feel as natural as those games, owing to the somewhat choppy animation rather than the smoothness of those other titles. But if you enjoy these kinds of games and have some patience with it, you’ll begin to enjoy the goals and targets you need to aim for. It’s certainly nice to see some three dimensional backdrops rather than scaling sprites as you journey along. The freedom of movement, like also found in ‘Desert Strike’, is the biggest drawcard here for me.

In closing, ‘Steel Talons’ is a decent little flight sim shooter, but it doesn’t rise to the lofty heights of the other military sims namechecked in this review. That doesn’t make it a bad game; it’s actually alright. But it does suffer from some slowness of play, and is graphically inferior to the notably amazing visuals of the other flight sims on the Lynx. That said, if you like these types of games, you may find it becomes a regular cart in your Lynx machine and a real showpiece to display for other gamers. After all, who would have thought a console of this kind could port a game like this? This fact alone might encourage you to sink your own talons into this game and find out why it’s a favourite of some gamers. Happy flights!