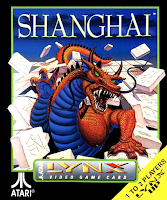 The ancient game of pairing tiles... yes, ‘Shanghai’ made its transition to the Lynx quite early on in the system’s history. But it’s not really a Lynx title that gets talked about very often. Is it that ‘Shanghai’ has been overshadowed by other Lynx puzzling stalwarts, like ‘Chip’s Challenge’ and ‘KLAX’? Maybe so. Well, perhaps it’s time Lynx fans reacquaint themselves with this classic game, which is based on a relaxing hobby still played on this very day.

The premise of ‘Shanghai’ is a simple, but that doesn’t make the game easy. Nope, this is one tough cookie! “But hang on,” you may ask “it’s just matching tiles, right?” Well yes, but the problem is a bit deeper than that. You see, you can only match the tiles that are ACCESSIBLE. The pairs of tiles UNDERNEATH other tiles CANNOT be matched until THEY TOO are accessible. Which means, you have to match the tiles starting at the top layers first. And get this… you can be playing a really good game, and then find that it’s suddenly ‘Game Over’… because the game KNOWS (and will tell you) that the only matching tiles that remain on the board are now inaccessible! How crushing!

All of this would be very frustrating if it weren’t for the fact that ‘Shanghai’ hits you with quality content, including the terrific graphics. The title screens and option screens are lovingly represented (cool dragon!) and the in-game action is simple but effective. The Lynx screen is not large, but noticing the differences in the tiles is never difficult. There are both numbers and symbols to look at on the tiles, and occasionally letters or images. The most striking visual is the array of tile patterns you can choose to play with, including dragon, fish, bear or spider (amongst others). Whilst these arrangements don’t change the game too much, they are a fun and exciting feature adding valuable variety and replayability to the game.

In terms of sound and music, 'Shanghai' shines. There’s been quite a lot of work done on the aural side here. Probably the most stand-out feature is being able to choose the musical background theme, a feature that made ‘Malibu Bikini Volleyball’ and ‘Loopz’ stand out so much. Whilst ‘Shanghai’ does not have music that matches the greatness of those two games, the selected tracks are still of high quality. The sound effects are also pleasant, and are kept to a minimum volume so as not to disturb the relaxing quality of the game.

The controls in Shanghai are also well implemented, all things considered. The use of a ‘cursor’ (a la 'Lemmings') was a good choice for this game, because scrolling through ALL the tiles manually was never going to work in this kind of game. All you have to do is select a tile, and then move the cursor to select another one, and… bam!... the tiles will be matched (and will float off the screen). You can also ask for a ‘hint’; that is, if you really can’t find a tile match, you can ask the game to do it for you. It feels a bit like cheating, but hey, you don’t have to use it! If it’s not obvious already, ‘Shanghai’ doesn’t just look and sound good… it also controls well, which is a real relief when you consider how straightforward the game is.

Even though all these positives, are great, there's still more to treasure in 'Shanghai'. The in-game features and variety is what keeps you coming back for more. There are the afore-mentioned different tile arrangments (which feel like ‘beginning’ to ‘advanced’ levels). There’s the possibility of racking up high scores on the ‘Best Scores’ screen. The previously-lauded hint system is excellent, as are the musical selections. And last of all, the very cool cut-scenes that appear when you finish a game board are stunning. It really does feel like an achievement when you get to the end of a tile arrangement, having zapped all the tiles off the screen, and you get a sense of completion rarely felt amongst Lynx puzzlers.

Overall, ‘Shanghai’ is a game all about patience, deep thought and strategy. It’s a great game choice for those slow, relaxing evenings inside the house, with the fire turned up and the rain gently pattering outside. It’s a game easy to get hold of, but difficult to master. And it must be said that the Lynx conversion of this popular game has really came up trumps in the gameplay stakes. Hey, it’s so easy to play that you could sit next to your loved one and give them the Lynx, and see if they can progress! If you’re a fan of puzzle games, and a fan of the Lynx, you’ll soon be a fan of ‘Shanghai’. Aside from making a giant Lynx mosaic on your feature wall, it’s probably the most fun you’ll ever have with tiles. Play it!