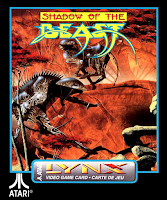 I have never had a game try to kill me as much as ‘Shadow of the Beast’. I was just walking my character downstairs to a dungeon for some quiet respite, after fighting off eyeballs, winged beasts, rabid bats, and an old hatted green gremlin (who shot a cannon at me). And what happens? The stair banister grows lips and spits a dart at my back. I mean, talk about overkill; having even the staircase try and massacre me. Welcome to ‘Shadow of the Beast’, where everyone and everything on the map wants you dead. Including the scenery!

‘Shadow of the Beast’ is a game found across multiple consoles and there are a number of sequels to the game too. It's a platform-adventure game that feels a little like an RPG sometimes, but is not enough like one to categorise it as so. If you look at the translations across different systems, the games look a little different to each other, but the version of ‘Shadow of the Beast’ that arrived on the Lynx looks most like the Amiga version. The storyline (condensed) is basically that you were captured, transformed into a monster, your father was executed, and now you seek to destroy the monster overlord to transform you back into a human form again. Easier said than done...but we'll get to that!

The visuals in this game are kind of outstanding. From the minute you enter the game, you see detailed sprites, full parallax background scrolling and graphical scaling. Everything looks dark and foreboding, giving the game a solemn feel. It really does feel like this is a land that has been dominated by beasts and monsters for some time, reflected in the mythical castles, gnarled trees and the ubiquitous savage beasts that surround you. Animation of everyone and everything is smooth. Nothing is choppy. When you look at the Amiga version and then look at this one, you can really see how well the Lynx performs. The visuals in this game, taken in their entirety, have to be among the top five graphical efforts on the Lynx. They are that good.

Sound-wise, 'Shadow of the Beast' is also a winner. The musical themes are different depending on what portion of the game you are playing, and change when you are facing the bosses of each area. ALL the themes are awesome, which is pretty remarkable. The forest theme, where you begin, is probably the best theme of them all, and is highly memorable; you'll probably find yourself humming it sometime. The effects are also really good. Punches connects, flames explode loudly, and all the creatures you face have distinctive individual sound effects; that's rather incredible. This is one of those rare games where the music and the graphics actually match each other perfectly. It's a broody, mysterious whirlwind of soundtracks and visualsfrom start to finish, which really do sour you along in your play.

The controls, also, are a winner. Your character is easy to control throughout the whole game, and as you journey along, you'll mostly use the Lynx buttons to either jump or attack. You'll also need to collect various items as you travel, which become instrumental as you journey through the game. Some bosses won't be defeated unless you have a specific weapon, and some doors will remain locked until you have the right key. This means you'll need to learn this game pretty well in order to ensure you go to the right place first, because you won't be able to have full access to level portions without a full inventory.

Now clearly, all of the above is great. So, what's the game like as a playing experience overall? Let me say this: 'Shadow of the Beast' is very good quality in its platforming-adventure style, but players are going to be extremely challenged by its difficulty. Here's the truth: if you know exactly what you are doing, you can finish this game in 25 minutes. However, it is HIGHLY unlikely that you will. This game is a massive labyrinth from start to finish, and there are NO directions to tell you where to go. At the start of the game, you are given one life (that's it) and health is always scarce, no matter where you walk. Even though you can do whatever you like, and go wherever you want to, there's only one true path; you just gotta find out what that is. If you don't follow that, you'll just die or become lost. Without passwords or extra lives, you'll need to continually restart from the beginning again until you get further in the game. If you don't have patience for this, you'll get bored eventually, and start to play something else.

But my suggestion is be patient with it; 'Shadow of the Beast' is a game crafted with such care, and made purely for the gamer's gamer, that you will find yourself richly rewarded for continuing onwards and advancing further with each play. Though the constant restarts are an irritation that hurt the final review score, this is a visually and aurally brilliant title which is a fully formed adventure from start to finish; as long as you have the patience to bear with it. Trust me, it ain't easy, and I still laugh at the ridiculous amount of foes and weapons hurled at my monster. Every monster you fight feels like it's position in the game was truly thought out to make the maximum damage. But hey, at least it's not a pushover!

In conclusion, both beginning and master platform game players should find plenty to like in 'Shadow of the Beast', provided you are prepared to bear with the game when it tests your commitment. Few Lynx games have quite the same 'feel' of engrossing you so much within the game; with the exception of titles like 'Rampart' and 'Stun Runner'. In the end, it's a simple but complex, classic arcade-style plaformer incredible visual and sonic style: what's not to like?