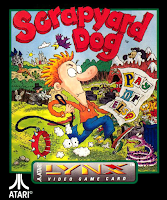 Picture this: Louie is a boy who spends most of his time in a scrapyard with his dog. One day his dog is stolen by Mr Big, who also happens to be a dog, and one who can write legibly. And to stop the dognapped canine being found by Louie, Mr Big dispatches his own gang of dogs, who wear human clothes and carry guns. Got that? If you can get your head around the storyline, you may well find yourself what is arguably the Atari Lynx's answer to Super Mario. In my view, it tops 'Gordo 106', 'Viking Child' and is - at least - equal to the mighty 'Toki'. Big call? Maybe. But I reckon the game gets a lot of things right. The Lynx needed a platforming hero, and 'Scrapyard Dog' hits a lot of worthy targets when it comes to originality, style, longevity and music.

'Scrapyard Dog' looks at first like a kids' game. But don't be fooled; this game is no pushover. In fact, it's one of the hardest Lynx platform games. This game will begin to challenge you early and then will steadily make things harder with every level reached. As Louie lives most of his life in the scrapyard, that's where you start, but soon you'll be travelling through zones as diverse as the Forest, the Ice and (my favourite) the City. And there are plenty more, so you'll be adventuring for a long while.

So, what does 'Scrapyard Dog' possess that makes it stand out from other Lynx platformers? Let's talk graphics. Visually, 'Scrapyard Dog' is pretty good. Some zones, like the forest areas, look fantastic, with great swathes of green and tree branches overhanging everything (and forming a canopy you can jump on). Other areas, like the cave stages, look a little less detailed. But overall, there's little to complain about. Louie never gets lost in the background, and his animation (and the animation of foes) is smooth and rewarding. The city levels look especially good, with doors, brickwork and sewers. Though naturally, you will want to focus on the game, rather than look at the backdrops too often. Enemies walk confidently toward you, or stand and fire their weapons. And depending on your searching abilities, you'll be fighting them with guns, flamethrowers and...if you're unlucky...a limitless supply of aluminium cans.

You may have noticed that the Lynx version of 'Scrapyard Dog' looks different to the original game (if you've seen that one on YouTube or happen to own it). In a nice touch, the Lynx has many of the original features, background appearances and enemies. Yes, the rats wearing newsboy caps are back in town! As are the fun piano-playing mini games. But graphically, you could argue that the Lynx version looks even better than the original. And there are some truly nice touches along the way.

Musically, I love this game. The soundtracks to the level are really catchy and the individual effects really rock. The tracks match the look of the game effectively; songs are friendly, upbeat, and are perfect for the action ahead. It was good that the game designers kept the music in the game, because so many Lynx platformers would have benefited from soundtracks (eg. 'Switchblade 2' and 'Viking Child'). Even boss fights have some different and terrific blood-pumping musical tracks to them. Guns sound realistic, and even the clanking sound of the metal cans you throw sound great.

Controls are strong, but you'll still need to get used to Louie's jumping style. Louie's jump is actually a very similar physics approach to Mario in Super Mario World. Sometimes you'll need to take a running jump in order to clear an obstacle, like a pit or an enemy. Otherwise, you may find yourself floundering mid-flight, and you won't be able to make it across, no matter how hard you try. Still, this is not a huge issue; the game is about platform mastery, and your skill level will increase as you progress through the game. You'll need all the skill you can get to clear the various traps, of which there are many.

Platform games usually rise or fall on a number of factors, such as replay value and variety. Thankfully, 'Scrapyard Dog' has both of these in spades. Even just getting out of the scrapyard stages at the beginning is a challenge, and you'll have fun trying to beat these stages and advance as far as you can. In terms of variety, there's a lot of fun to be had. Shops are littered across the stages with invincibility powerups, weapons or other items. Enemies are plentiful and various. There are hidden items everywhere, including money bags, shrinking power-ups and level warps. Also, there are some other pretty cool surprises along the way; did anyone say vehicles?

In terms of a challenge, 'Scrapyard Dog' is tough. It is definitely possible to finish the game, but it is very hard without finding level warps and stocking up on invincibility t-shirts. The great thing about 'Scrapyard Dog' is that there are many ways to complete a level: scrolling can go up, down and across in many of the key stages. And even though it feels like enemies may take you out with some cheap hits sometimes, there's not a lot wrong with the collision detection. Usually when you die, it's because you got hit. And that will happen a fair bit!

In terms of negatives, there are a few. There's no password or saves, so it's back to the beginning once you have used up your lives. The graphics are not quite as flashy as some of the other Lynx platformers. And several of the levels really do pose a strong challenge. But other than that, this game is as solid as platformers come. If you learn where the level warps are, you'll find the game much easier. Just good luck finding them!

Overall, if you've been looking for a mario-esque game for the Lynx, you can't go past 'Scrapyard Dog'. It's got real charm, it's fun, and there is plenty to challenge you along the way. Are you ready to take on Mr Big and grab your pooch back? That's for you to answer! Great game, Louie!