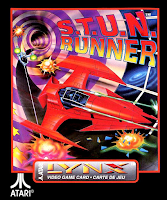 Speed. Frantic time limits. Loop-the-loop pipe racing, fanging it upside down while you blast rivals. If you really want to show someone what the Lynx is graphically capable of, then Stun Runner is one of the titles you show them. Originally an arcade classic, it’s speed racing, it’s intense, and it still feels fresh today.

Stun Runner is a game where - lets be honest - the storyline doesn’t matter too much. All you need to know is that you are in control of a red coloured craft which is blindingly fast, scorching through 20+ zones of gravity-defying racing goodness. You’re also competing against some dangerous foes, on tracks that range from outer space see-through glass to Earth roads currently under construction. It’s not often you play a racing game where the track slows you down when you drive over an unfinished portion of it; Stun Runner is original enough to take you there.

Once you switch this game on, you are taken through some beautifully coloured intro screens and to the only choice that really matters in the game: do you start at the easy tracks or the difficult ones? Obviously, beginners would be wise to start at the earliest point, but as you advance in skill you will likely find yourself skipping those introductory tracks and mixing it with the enemy vehicles at a near-midway point of the game.

Though there’s plenty of nice stuff to look at in terms of maps and interludes, the racing itself is the REAL eye-catcher. Tracks scale beautifully, and the rendering is surprisingly quick. Textures exist on the tracks themselves, so you’ll find yourself racing over ‘star’ symbols for points or power-ups, as well as the ever present speed boosters. Roads have rails, tunnels and, yes, you can do a full 360 degree turn in the pipeways. But rather than being a gimmick or show-off trick, this dynamic can save you vital time or expose other game secrets (which I’ll let you find out for yourself). Enemy vehicles zoom beside you, fire their weapons, and just generally get in your way; which is what they’re really trying to do, since the only real opponent you race to survive is the timer.

You’re also going to be treated with some pretty nice sound effects and actual speech in Stun Runner as well. Most effects are digitised, meaning that you’re hearing someone’s tyres screeching, your own voice scream ‘WEEE-HOO!’ (when you hit a booster) and the commentator telling you off (‘Stay off the rails!’) Incidentally, the commentator also shouts hints, wishes you luck and announces the number of each race track. It’s a nice touch and detracts from any feelings of ‘flying solo’ as you race.

How does the vehicle handle? It’s not going to feel perfect for everyone, but the general feel is very good. One plus is that the vehicle propels forward by itself, so you only have to think about firing your gun or blasting a ‘shockwave’ (an uber-weapon that blows up anything in its path). You’ll sometimes come across these rare items and find yourself using them sparingly; they aren’t easy to get back into your weaponry arsenal! Controls feel natural, easy to pick up and largely seamless. Really, if you can’t win a few races at the beginning, you just need more practice.

Which leads to the penultimate question; if so many aspects of this game are good, what’s the challenge like? Stun Runner answers this question in an interesting way, which you’ll either love or hate. Basically, just like the Lynx version of Gauntlet, you can choose to start halfway through the game or right at the beginning; which belies the fact there’s no save feature or password option. You actually need to learn these tracks like the back of your hand and practice hard if you want to make it to the end of the game. In certain later levels, even missing a speed boost can mean losing the race, and you only get a certain amount of retries. It’s a shame there’s no option to just pick any track you like for a trial run; it would have been a cool option. But the positive of this setup is that the challenge level is high, and it’s unlikely you’ll come close to finishing this game for a long time.

I can’t find much to fault with Stun Runner; more options for racing and different vehicles might have been nice. In general, though, with Stun Runner you’re getting a speedy, tight racing game with plenty of challenge, fun, and special effects to boot. Even as a gamer who doesn’t generally play racing titles, I always come away impressed and admiring the challenge of beating later levels. So, if vehicle games are your thing, you’re going to likely love one of the best examples of that genre on the Lynx; the mighty Stun Runner. Rev up!