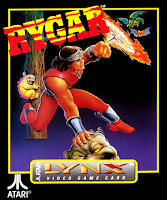 DOCTOR: Congratulations, you two, it’s a baby boy. What do you want to name him?

DOCTOR: I see... you can’t decide. Why don’t we combine the names and call him RYGAR?

DOCTOR: Too late, I’ve already put the name on his birth certificate. You’ll have to pay lots of money to change it. That sucks, doesn't it! AAAH HA ha ha ha!

DOCTOR: Now, in the future, a man with a name like this is probably best being in a mythical platforming side-scrolling game. Throwing his shield at monsters.

FATHER: His SHIELD? Why can't he have a sword?

DOCTOR: Sssh. He will also likely jump very high and need to traverse dangerous terrains in order to defeat a final boss called Ligar... that's what I think, anyway.

MOTHER: That all sounds a bit dangerous to me.

FATHER: What are things going to look like visually when um... Rygar... goes on this journey?

DOCTOR: The graphics will look okay, but pretty formulaic because of the huge numbers of levels involved. They look a bit washed out when you compare the game to other Lynx platformers. Rygar will move around smoothly, but the animation of the monsters will be a bit up and down really. All up, the graphics are okay, but they could be a lot better. The look a bit dated.

MOTHER: What's the world going to sound like for Rygar when he's older?

FATHER: What, no variation?

DOCTOR: Doubt it. The sound is gonna be good though. Some nice enemy sound effects and weapon throwing effects. But when you add it all together, it's a mixed bag I reckon.

FATHER: How do you know all this?

DOCTOR: Oh, I've seen the arcade game. This is the Lynx port though, and it’s a good translation. Trust me, I’m a doctor.

MOTHER: (impatiently) Will he be able to move around and jump and stuff?

DOCTOR: Oh yes, he'll be a high jump specialist, and will be able to throw his shield when he jumps, walks, ducks, all that.

FATHER: (wretchedly) Why can't he have a sword?

FATHER: Not satisfactorily, no.

DOCTOR: Whatever, anyway, he'll be able to move around okay and he will have a fair number of lives if he carks it. The main issue is that there won't be a password or save game option.

DOCTOR: I know. He is gonna have to be a kind of uber ninja to finish his adventure and do it all in one sitting. A bit like ‘Shadow of the Beast’ on Lynx. Same deal. With not a lot of level variation, it’s not as fun as it could be. It's more an exercise of patience and plodding along really. But it’s okay.

MOTHER: How is this adventure overall going to be?

DOCTOR: Oh look, if you like any conversion of the arcade game you're probably going to be pretty happy with this adventure. The Lynx (once again) does an arcade conversion well. But for anyone else who has played games like Switchblade II or Scrapyard Dog, you'll be a bit unconvinced by the lack of variety. And the powerups don't seem to do too much really. I don't really know what a lot of them do, to be honest.

DOCTOR: Oh by the way, wait until you see the final boss (sniggers)

FATHER: Go on, what?

MOTHER: Well, if the final boss looks as ridiculous as you say, then I'm very happy to go ahead with the name Rygar. And I understand that his adventure is going to be a good translation of the original, even if it's not going to appeal to players of modern platformers. A challenge is a challenge.