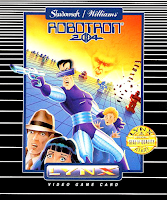 Get this... it’s only about 60 to 70 years before we run around frantically as metal monsters fry us with lasers... if ‘Robotron 2084’ is to be believed. It’s hard work being a half-man, half-cyborg hero; for a start, there are humans to rescue, and at the same time, there are colourful mechs who want you dead. Thankfully, its time for Lynx players to help our hero to do all he can to end the schemes of these robotic fiends for good. Let’s get Robotronning!

‘Robotron 2084’ is a “Shadowsoft / Williams” game title. Where have we heard that name before? Well, there is another classic retro game on the Atari Lynx called ‘Joust’ ported by the same group. Actually, ‘Joust’ has more than a few similarities to this title. Both are arcade conversions. Both Lynx box designs and in-game sound effects are similar. And both have frantic, colourful action sequences built around ‘waves’ (levels) where you must vanquish various foes.

Now, ‘Joust’ has you controlling a giant, ride-on ostrich; in ‘Robotron 2084’, you control someone the game manual calls “the man”. Your job is to traverse various dark arenas, blasting all the robots on the screen until you are taken to the next wave. Just like ‘Joust’, there is no end to the game; it just keeps rolling on. So here’s the key; because it’s a “one-hit kill” kind of game with three player lives... get as far as you can!

Announcement number one; this is not a graphically stunning game, but it is colourful! Once you get through the title screen and the menu (press Option 1) you are faced with a large black space with some vibrant-looking sprites. Yes, that seems very similar to ‘Joust’! And just like ‘Joust’, this game does give you smooth animation, great visual effects, and recognisable friends or foes. As you progress through the game, you will soon be able to spot clearly who is a friend (collect ‘em) and who is a foe (blast ‘em). Finishing each wave creates a very cool screen pattern each time, which delights the eyeballs for a split second until you are unceremoniously dumped back into the arena for more action. Did you need a break between levels? Well, you ain’t getting it! Intensity is the theme right here!

If I do have one criticism about the graphics, it’s that the sprites are very small. If you struggle with eyesight (like I do) it’s somewhat a stretch to be able to watch for everything going on. But admittedly, when you consider that they had to fit all of the action in ‘Robotron 2084’ on the small Lynx screen, the miniaturised look of the game is understandable. After all, it would have been worse to have had a scrolling screen in this title, with hidden foes appearing as you walk. So when you take that into account, it becomes a lot easier to get used to the action all crammed on one screen. And the enemy creatures do vary considerably, from indestructible giants to floating mechanical cubes; all as deadly and anti-social as the next.

Announcement number two; the sound effects in this game are terrific, and completely faithful to the arcade; which is astonishing. As in ‘Joust’ there is no in-game music, but the audio effects are beautifully digitised and effective. The basic laser-shooting sound effect of your character sounds both futuristic and punchy. The various foes also create their own unique laser firing sounds. You actually need to learn these different audio effects, because they will indicate what is happening elsewhere when you are focusing on a key area of the action. You need both your ears and your eyes everywhere in this game, so the audio is once again a great achievement from this game company. It’s honestly impossible for me to get tired of the sounds that this game produces! They really are that good.

Announcement number three; the controls of this game are great, but they take some practice to master! ‘Robotron 2084’ was originally played on two joysticks, so the issue for the game designers was how to make the control scheme work on Atari’s awesome handheld. Well, through some clever thinking, the game designers give you the choice between three different control schemes. Smart move. My favourite is the auto-firing method. This feels terrific, because I can rely on my laser to fire continually as the A and B buttons toggle the laser direction from horizontal, to vertical, to horizontal. At that point, all you need to do is move around strategically and fire at the enemies without getting hit. Though they can feel a little awkward, I can understand why the controls are as they are. “Shadowsoft / Williams” made both ‘Robotron 2084’ and Joust’ to be for the purists, who knew the original arcade game and didn’t want the formula mucked around with. Like ‘Xybots’, we are dealing with a high quality Lynx title which is controlled differently to any other Lynx game; I hate to say it again, but... you just have to get used to the controls!

As for longevity, ‘Robotron 2084’ is a long laster of a game. It’s a “pick-up-and-play” classic, much like ‘California Games’ or... um... ‘Joust’. You are going to be trying it purely to see how far you can get each time, because there’s no way you can complete it. There’s great freedom in that arrangement, as much as I like games that can be finished. You don’t need to worry about passwords or game saves.

But I must say, the challenge is really hard in this game. And I didn’t see quite the variety of waves (like bonus waves) which I enjoyed in ‘Joust’. But then the foes do get progressively tougher, and the future waves feel even more confining than the previous ones. Panic often sets in. Still, that’s what the game is designed to do! And so it’s exhilarating to see how far you get each time, feeling no real disappointment when it’s time to try again.

In conclusion, I liked ‘Robotron 2084’ quite a lot, and I can see why it’s a favourite for many Lynx players. I really liked the action, the challenge, and particularly the audio effects. Sure, the graphics and controls took me a little while to adjust to, but they soon became par for the course and part of the overall ‘Robotron 2084’ experience. And what was that experience? It was, simply, “great fun”. And when it comes to an arcade game, there’s really not much more you could ask for. As both a quick-play title as well as one that invites longer sessions, I thoroughly recommend ‘Robotron 2084’ to Lynxers who like any gaming genre.