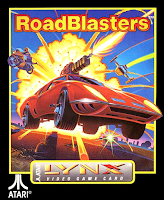 The Lynx proves itself again to be THE arcade conversion gaming portable with a strong translation of ‘Roadblasters’. Haven’t heard of this game? It was a bit of a classic arcade racing shoot ‘em up, where your goal was to race on visually diverse tracks, collecting fuel and blasting other vehicles. There were always a few people around the original arcade machine, and if you play this title (particularly with the McWill mod) you’re likely to get your own gaggle of onlookers!

Objective: race that red beast of a vehicle and don’t run out of fuel. That’s it! Simple? Nope. 50 tracks. Enemy cars. Tight twists and turns. No passwords. It’s an arcade challenge alright, and the Lynx does well to capture the intensity of the original. Once you’re out of fuel, you lose!

‘Roadblasters’ looks pretty nice. I wouldn’t say it’s the best looking Lynx racer of them all, but it’s nicely done. Sprite animation and colour palette are excellent. Your car is a vibrant red and all the enemy vehicles show up easily on the small screen. And BOY is the action fast. The speed could well shock you if the only other vehicle game you have is ‘Hard Drivin’’. It’s even faster than S.T.U.N Runner! That’s not always a good thing though, because enemy cars really zoom toward you fast, making them hard to avoid. Your speed reaction time will need to be positively Olympian to avoid crashing into them before the checkpoints.

Sound is also good. I would have loved some background music, but hey, it is what it is. Thankfully, the sound effects are terrific. Explosions, nice tones when you get power-ups, and even some speech! I liked especially the spoken hints and tips between levels. These are really well done. There’s a cool little track that plays every checkpoint, and I really liked the turbo boost sound effect. There’s not a lot to complain about sonically here; you’ll feel right at home in the action every time you pick up the game. It’s definitely a ‘pick up and play’ cart.

Handling the vehicle takes a bit of time to get used to because the action is just so fast. But the car controls really well, once you get used to the frenetic nature of it. The hardest thing to do is avoiding the enemy vehicles, but you’ve got an on-board cannon to blast them. Some vehicles can’t be shot down, including the classic bulletproof limos. There’s plenty of enemy vehicle variety, from motorcycles to cars that suddenly swerve from the grass. You basically have to press the shoot button fairly constantly in order to make progress, because otherwise you’ll run out of fuel crashing into these crazies.

Thankfully, there are friendly helicopters that drop more advanced weaponry and enhancements, which can help you a great deal. But don’t miss them! Items can easily drop uselessly to the ground if you don’t swerve in time to catch them. Awesomely, these modifications will change the appearance of your vehicle temporarily; a really nice touch. This really injects variety into the game itself, which is something the game admittedly needs.

Although this is a game that gets a lot of positive feedback all round, there are certainly a few downsides. Fifty levels are a lot without a save point system. It’ll challenge you, but getting to level 45 and then dying is a bit of a mind fryer. Still, that is what arcade games are ultimately about, and thankfully with each new game you can choose to start at a more advanced point in the race (rather than level one). The other minus is the lack of real track difference. Sure the races look a bit different each time, and there are different twists and background scenes, but there are no hills, no gullies, no tunnels... it’s always a flat open track. That’s where I feel ‘S.T.U.N. Runner’ has an edge on this title; but as mentioned before, this game dominates it pace-wise. You need to have much quicker reactions in this game than ‘S.T.U.N. Runner’. And the later tracks? That’s where your skills will REALLY be tested.

In closing, ‘Roadblasters’ is a brilliantly accurate version of the original coin op, and maintains the Lynx quality for arcade conversions. Although it could have benefited with a bit more variety (and organisation) in its huge number of tracks, it should challenge any serious racing fan; and fans of the original should be pleased with the quality of this title indeed. It’s a great little game that even non-racing fans have a soft spot for, and it really does feel like you are back in the local gaming arcade; only this time, you get to keep your coins! Give ‘Roadblasters’ a blast!