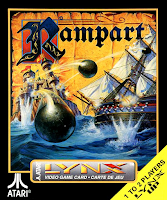 “Ready! Aim! Fire!” barks the captain. Cannons fire, ships explode and walls crumble. You are under attack from a foreign power that is charging at you by boat, but if they should land, they’ll release deadly ground troops. What can you do against this onslaught? Construct your forts, rebuild them after damage, and claim all the territories as your own. Sound simple? If only it was! But Rampart is a Lynx masterpiece. It’s on many different gaming systems, but feels particularly special on this console. An almost perfectly balanced war sim, it is ideal for strategy buffs but should be fun for anyone who is willing to give it a red hot go.

The idea of this great Lynx title is to essentially defend your territory from marauding invaders and take over all the regions around you. In order to do this, the Lynx puts you in an overhead perspective of your land, so that you get a good view of the action.

Rather than being dull and repetitive, ‘Rampart’ ensures you never get tired of each of these phases. Each are frantic! Building your cannons is timed. Firing your cannons is timed. And most chaotically, rebuilding castle walls (which have been shattered by enemy fire) is timed as well. If you run out of time, you won’t have enough cannons to shoot. Even worse, if you don’t secure your castle walls, it’s game over for one of your lives, because you’ve left a way enemies can get in.

Before going on with the review, it’s worth exploring one very cool part of this game: the building phase. If you’ve played ‘Tetris’ before on any system, you’ll love this part of the game. You are given bricks of different size and shape to rebuild with each time this phase comes around. But not all the bricks are ideal for the job. No matter, they’ve got to be utilised somewhere, by either expanding your territory or by making a wonky looking fort. When you’ve finished building, rather than keeping your castles looking like blocks, the game creates graphically beautiful models of what you’ve made for the next phase. It’s a cool touch.

Rampart gives you a lot of choice in how you play, which is one big strength of the game. You can build castles as large as you like, meaning you can fit more cannons inside them (which makes you more powerful). But the clock is always ticking, so you’ll soon learn what is most important when trying to defend your land. Is it better getting the “territory bonus”? Is it armouring up one castle, or two? Should you build a perimeter wall? It’s up to you and your playing style!

This game is visually a treat, but it’s not made to blow you away. It’s simple, functional and effective. But there are some incredible cut scenes that are among the best seen on the Lynx. The intro sequence with the horse rider is arguably in the top five Lynx intro sequences, graphically speaking. Pretty unexpected coming from a strategy sim! The in-action graphical effects of explosions, water splashes and castle turrets are always good. Rampart is certainly easy on the eye.

Sound-wise, Rampart is a complete surprise; memorable themes, and amazing digitised speech! Hearing your captain yell “Cease Fire!” never gets old. There are other examples of speech here too, and some terrific military-sounding themes to round out the “war feel” of the game. Explosions are satisfying, unless of course these are happening to your own castle walls! There’s not much to gripe about here. It’s spot on.

Controls in this game are excellent, and they needed to be. It’s a game about acting quickly, and you never feel like the more intricate d-pad moments (eg. building phases) are outside the realm of completion; the game knows where you want to build and how you want to place a block. Had the controls been bad, this game would be too frustrating to play, but thankfully there is a great responsiveness that comes from the Lynx.

Gameplay-wise, this is a game with a “just one more play” feel; so ‘California Games’ fans will feel right at home with that dynamic. There’s really no other game quite like this on the Lynx, which is really refreshing when you play; it feels like a unique experience. By the way, if you’re good enough to crack the game on easy mode, you can try it on hard; if you dare. Honestly though, even getting to map four on easy is a big challenge, especially for beginners. There’s also a number of fun and nasty surprises along the way for particularly good players. Two words only: “red ships”. Ugghh...trust me, these things are the stuff of nightmares in this game. A hot tip: blow them up first!

I can’t be saying all these positives about this game without mentioning something negative, as much as I love this game. The ONLY way that I think ‘Rampart’ could have been improved would have been a stack of new and different maps, perhaps with different challenge elements. Hills, volcanoes, inland lakes...that would have driven this game to near perfection. But you can’t really be disappointed when the challenge is so well balanced; even once you conquer the mainland, there’s more to defend. I won’t spoil anything obviously, but there’s more to defend than what immediately meets the eye. Have fun finding out!

‘Rampart’ fills the “war/strategy” gap of the Lynx catalogue with great aplomb. It looks, feels and plays like a game in the medieval era where gunpowder has just started to be introduced in battles; and that’s an era not too common in most gaming. It feels fresh, new and strategic, but it’s simple enough for anyone to play without having to read huge amounts of rules. As someone who does not play these kind of games easily or often, Rampart is in my top five Lynx games of all time. And that’s saying something about how good it is! Simply put, if you love strategy, you’d be mad to miss it. Cannons away!