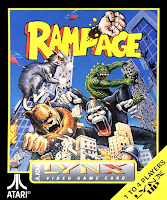 In the great tradition of the King Kong franchise, there are video games out there which allow you to be some sort of enormous monster, destroying everything you see. And as many of you will know, that's the kind of game 'Rampage' is for the Lynx! So...are you ready to rrrrrrumble?

'Rampage' is truly an original game. There's really nothing quite like it on the Lynx, and there wasn't much like it at the arcades when the game came out. Is it a scrolling beat ‘em up? I prefer to think of it as a ‘strolling eat ‘em up’! Plus smashing things. A coin-op translation, 'Rampage' allows you to be a big gorilla, lizard, rat or werewolf, and the goal is tracking down an escaped scientist. Why? He holds the cure for your giant, monstrous form! Get hunting!

Visually, ‘Rampage’ hits you with great graphics from the word go. The sprite of your character is huge, while the human life around you looks small. Nice. Unlike ‘King Kong’, the reason for your city exploration is to find a healing potion; not because you were captured and locked up. It’s easy to see why a game concept like ‘Rampage’ has recently inspired a movie adaptation (‘Rampage’ with Dwayne Johnson - appearing in 2018). Whilst the movie is unlikely to follow the story of the video game, the big destruction is still centre stage. ‘Rampage’ is about smashing stuff. And thankfully, the stuff you smash looks terrific.

With both graphics and animation, everything is silky smooth; army soldiers run, helicopters whizz overhead, buildings are detailed, and you can more or less do what you want in each stage. Oh yeah - there are over 50 stages (or cities) of stomping, crunching and climbing action. Your monster can scale buildings, punch windows, eat people and even hold ‘special captives’ in their fist for long periods to multiply scores. The look is cartoony, but it’s nicely detailed and everything scrolls beautifully. In fact, having seen the arcade, you could make the argument that the Lynx version looks better and is animated smoother! It’s certainly better than some console versions as well. And that’s a pretty good artistic effort when you think about it! It wouldn’t be the first time the Lynx has graphically outshone a console or arcade counterpart.

Sound-wise, your ears will be treated to a cacophony of interesting effects. Sadly there’s no speech, but the various sounds are great. And, the music is really nice too! Bombs explode, dynamite whooshes; and you can ditch that dynamite if you like. The sound of your monster chewing is pretty hilarious (we’ll get to the humour later). The audio side of the game matches the play really nicely overall. Overall there’s really no complaints, and it’s surprising how many different kinds of interesting sounds they managed to fit in here.

Controls, also, are mostly sharp. It’s very easy to jump, climb, punch and eat. You will find the monster’s slow leap a little strange at first (it’s an odd jump). But there’s no real issue once you get used to the ‘floatiness’ of it. Thinking about it, I must say that it would have been nice to have had a few more tricks up the monster’s sleeves in terms of moves. Maybe somersaults, or a hilarious pose after executing destruction (AKA ‘Pitfighter’). But remembering this is an arcade translation, you wouldn’t expect many new dynamics in the game; much of the animation and movement you see is taken straight from the arcade.

The Lynx does an amazing job of replicating those core arcade mechanics. You destroy the buildings the same way and much of the strategy remains identical. I should note here, there’s no real difference between monsters. It’s more about the visual look and preference you have. My personal top pick is the gorilla; his facial expressions are just the funniest!

I said I’d get to humour, so we just need to mention here how funny this game is. I mean, you can basically eat almost anything, but certain things WILL hurt you. Yes, you can eat the guy in the bath if you want, but swallowing the whole bathtub is probably not the best dietary move. Eating toilets? Bad. The monster will spit out the porcelain! Your beast will also see stars when he falls off buildings, and will stare at you with a really worried expression when he is close to death. It’s oddly hilarious. Weirdly enough, when you DO die, you get turned into your former human body with your monster’s head on it. How strange is that?

It’s at this time we look at the gameplay. And it must be said, gameplay-wise, there are a couple of things worth mentioning about ‘Rampage’. I’ll explore the good stuff before the bad stuff.

Let’s start with the positives. This is a fun game. It’s easy to control your monster, the concept is original, and there are different ways to play the game. Tired of knocking down buildings? Well, you can find a place to hide whilst the soldiers do it for you (with timebombs). Do you have the skill to avoid electrocution, army tanks, rifle-fire and dynamite? You get to find out! There’s lots of fun little touches to discover too, from water hazards to lightning bolts. The interludes are funny and the title screens are full of character and detail. A lot of love went into this game and you can tell this from the beginning.

Negatively, there are a few things that should be mentioned. Look, this game is LOOOONG. And there’s not a lot of variation, honestly. Bash building, avoid bomb, eat people, next level. And so on, through the whole game. The 50+ cities all look fairly identical after a while, even with the subtle difference in visuals. So the original novelty does wear off once you hit level 15 or so, and there comes a point where you wonder ‘I have to finish HOW many levels?’. That’s not to say the game isn’t fun to play; it really is. And unlike similar arcade Lynx conversions like ‘Pacland’, there actually IS an ending in this one. It’s just that...GETTING there, shall we say, may be a test of your patience. I did find that, after a few goes, I was wishing for either (1) a password system or (2) the game to be split into two parts. This would have made it so much better for replay value. As it’s based in the USA, couldn’t we have had “The Eastern States”, “The Western States”, etc? This would have allowed for more variety. Sadly, this wasn’t to be.

And yet...when you get right down to it, ‘Rampage’ has such a heart of fun and hilarity that you are mostly likely to look past the shortfalls, and pick it up every so often for a good game. And thankfully, there’s a level skip option which means that you are able to immediately skip further ahead in the city journey, at least for a while, to start the challenge (a la ‘Gauntlet’). This shows that the game designers probably did think about this ‘enormous volume of levels’ issue. In the final score, I have to take some points off for the lack of casual play options and no password capability over such a huge game. The sheer size of the game with no password system is a big ugh. But thankfully the game has a lot of great content, which means I can’t get too upset; the conversion really is strong.

Overall, I love the concept of this game, and it plays really well; I just wanted to see more variety and Lynx distinctiveness. It could have made the game even more of a beloved title than it already is. But hey - even the deficiencies don’t stop me from enjoying a ‘monster’ of a game. Just be prepared for a long play if you want to finish it. In all, ‘Rampage’ gets a thumbs up from me. Grrrraaarrggh, anyone?