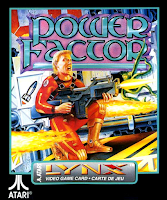 “Red Ace”: now where have I heard that name before? The hero in the game ‘Power Factor’ is in a fairly identical, self-named game on the Atari ST. Which surprised me once I’d seen it, but it’s again an example of the Lynx porting a title from a familiar source. Here we have a visually brilliant platformer, on a portable system that has a LOT of games like that. So, what does ‘Power Factor’ have that makes it stand out (if at all)?

We’ll cut to the storyline; the basic objective here is for you, Red, to traverse all the levels of the technologically advanced surroundings and collect bomb parts, which you need put together in order to defeat the final bad guy at the very end. You can’t afford to miss any, so you must get searching and use your map; and whilst you’re at it, mind for those killer robots if you please! Good thing you’ve got a gun with limitless ammo and other weapons in your arsenal (which you must find). And, you’ve also got a handy jetpack, as long as you conserve your fuel!

Handmade Software produced games have some of the best graphics that the Lynx has to offer, and here they’ve really outdone themselves. I mean, the Lynx version looks even better than the Atari ST version. Animation of the hero and enemies is SILKY smooth. Backgrounds are epically detailed. Sprite sizes are large and pristinely coloured. In fact, there’s so much going on that you do get the occasional “slow-down” or lag during tight action, much like what affected “Viking Child” on the Lynx. Thankfully it’s not that common to get this, and it doesn’t cause too many issues. Visually, Red himself looks a little like vintage Duke Nukem (the platform titles rather than the 3D shooter). But incredibly, the vibrant graphics here actually top some of the 16 colour PC games of that era. They really are that good.

Let’s talk about music. And here it's a bit like “Houston, we have a problem...”. Um…there isn’t any. At least, not in the game ITSELF. This was the same situation as the Atari ST game, incidentally, so you could say it’s a faithful translation. But this is unfortunately a bit of a sad thing for the player, because the same problem of "no music" has plagued other Lynx games like ‘Switchblade 2’ (amongst others). All you hear is explosions, buzzes and beeps, all the time. ALL the time! Now, granted, those sound effects are actually really good, some even digitised...but a backing track, even a simple one, would have REALLY helped here. Remember how good the ‘Xenophobe’ music was? 'Scrapyard Dog' music? 'Toki'? Incidentally, one of the only music tracks in this game, at the “game over” screen, is actually completely BRILLIANT: in the top 5 of Lynx tunes of all time, easily! So you have to ask, why couldn’t tracks like these have been implemented throughout?

Controlling Red feels really unique for a Lynx game. Whilst holding down the Lynx d-pad makes your character run, a simple ‘tap’ of the d-pad lets you select special weapons on the character toolbar. Rather than being awkward, this works surprisingly well. Of the main Lynx buttons, one jumps and one shoots your pistol. You are also able to look at your map, which is a nice touch. This helps you to find the exit of each level, but you’ll need to find those bomb pieces first.

Playing ‘Power Factor’ feels more like a game of ‘Slime World’ or ‘Shadow of the Beast’, than perhaps ‘Gordo 106’ or ‘Scrapyard Dog’. By this I mean it’s multi-level, map focused, with predictable enemies and plot-based collectibles. You can explore up, down, left and right, and there’s an exit somewhere on each map, leading to a big boss battle. This puts the game kind of in the “platform-adventure” genre. Like ‘Slime World’, you need to be selective in when you use your supplies. Fuel, especially, is scarce, and you won’t survive too long without it, due to the nature of needing to constantly fly up or down the pits and platforms you come across. There are both enemies and big bosses, so you’ll certainly need your gun aiming skills (which thankfully Red is good at).

This all leads to the question, “how fun is ‘Power Factor’ to play?” Firstly, I'd say you won’t find many BETTER LOOKING platformers on the Lynx. It tops most of them. But stunning graphics “do not maketh a game” (or something like that). We need to therefore drill down a bit here, and look deeper than just what we can see. And herein lies a few issues.

There are certainly ups and downs to the game, starting with the challenge level. Rather than being too easy, an issue that plagued ‘Switchblade 2’, ‘Power Factor’ feels TOO difficult at times. Some enemies are almost unavoidable, due to the physics of Red’s jump and the fact that the game is mostly played in corridors (you can’t jump through the ceiling). You may even find yourself running thorough the spinning discs and other robots, copping dangerous damage, just because shooting them takes so long. Plus, many enemies reproduce from the wall chambers, so unless you have a missile on you, they’ll keep coming out. Now, I don’t mind a challenge; better too hard than too easy I think. But the problem with ‘Power Factor’ is, as gorgeous as the game looks, each new level doesn’t look all that different from the last, once you scrape through them by the skin of your teeth. The game could have really used some more varied textures. That’s the kind of thing that spurs you on in games like these; the variety of the scenery. The metallic, techy corridors get kinda samey after a while. Definitely a password system, given the toughness of this game, could have also made this game better.

Another thing that could have helped ‘Power Factor’ would have been a variety of hidden collectibles. There’s really nothing much in the way of secrets here, which is something that was so endearing in ‘Slime World’ and ‘Scrapyard Dog’ (to name two other platformers). Even 'Switchblade 2' had some breakable walls with hidden extras. With ‘Power Factor’, you always know where you need to go and why. The only challenge is really just surviving, and conserving your very limited supplies. This limits the enjoyment somewhat, because there’s really not a lot of extra stuff to look for. And how much did some hidden content improve games like this one on other systems, such as the 'Metroid' series?

None of this means ‘Power Factor’ is a bad game, of course; it just feels like some opportunities were missed. If I had to choose between complete arcade port faithfulness, or a couple of added (unobtrusive) enhancements to improve upon a classic, I would almost always choose the second option. This might make me rare among some retro gamers, but when people say (for example) that ‘Xenophobe’ on the Lynx is the best version of the game, you need to ask why that is. The additional cut scenes in ‘Rampart’, for example, weren’t in other ports of the game, and they were just pure awesomeness. Similarly, the classic RPG 'Chrono Trigger' was only enhanced by the addition of extras. As I’ve said elsewhere, game developers make choices for better or worse in this area, but I think some of the suggestions I wrote above would have elevated ‘Power Factor’ over the competition; especially since it already has so much going for it.

So in all, ‘Power Factor’ is another GOOD quality Lynx platformer, but one that COULD have been really great with just a few extra touches; it just needs more graphical variety, some backing music, and some adjustable challenge areas. As it stands, it’s a fun little game and certainly shows off what the Lynx can do. It’s a rating of 6.5/10 at least. Top visuals, fun to play, challenging...just not special enough to be quite considered near the top of the tier for Lynx platform titles. Platforming fans will likely have some fun with it, but you may find that you can get a more enjoyable jumping and action fix elsewhere on the Lynx. It's fine, and you may just enjoy it, but it needed just a few more things in order to be among the top platform game contenders.