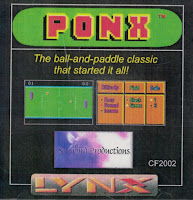 All words that fit well together.

Atari today maybe not be the Atari of old but history does not lie. Arcade machines, home game consoles to the home PC. Atari has produced some of the most ground-breaking technology that the world had the pleasure to see.

There are some games that everyone knows. Famous games. Remember Pong? If you don’t remember the name, I'm sure you will remember what the game looked like. The Tennis type game you played as a kid? Or maybe your dad played it? A simple game that consisted of a ball and two paddles. The aim of the game was to bat the ball back and forth, trying to make your opponent miss. The first one to score 10 points won. Maybe you played it at the Arcade or on an Atari home console. Sound familiar? If not, you should be ashamed of yourself.... or maybe you're just not as old as the old gamer writing this. 😅

The Atari Lynx is a legendary console in the handheld world, for good reasons... and bad, and it has an updated version of Pong, called Ponx. It was one of the first of Songbird's published games for the Lynx, being released on a PCB style cartridge. Taking the basics of an old classic and revamping it was a brave move. There was the potential to upset the loyal Pong fans...make a bad game or destroy the memory of an all-time classic...and you'd go down as a dead duck forever. You know the old saying if it's not broke, don’t fix it. Well, it's too late for that. The game was released and published a long time ago (and re-released again in 2018 on a curved lip style cartridge), so let's see how it scores in this review.

Upon load you get a full-size Atari logo which is pretty cool to see on the Lynx. You also get a screen displaying information about an upcoming Atari Jaguar game. I say upcoming, this game was originally released in 1999, don’t get too excited about the Jag release! Is advertising in retro games that effective? 🤔 Ok, we all know that Pong is an old game and the graphics are very basic. With Ponx they have been updated! Yes, the graphics are still basic, they don’t need to be flashy. The game looks good for what it's trying to be. It's in full colour for a start. You also get different colour options in a green or black background. Everything on the screen is clear, its size is perfectly framed for the small Lynx screen. The menu is easy to understand and select your options. A great start.

Music wise, well there's not much. You get music at the title screen and when a game ends. It’s a great and catchy tune. The lack of music is a good thing though. You get the sound effects as the ball hits the paddles and the side of the playing arena. It's all the game needs. It’s a game that works with the concept that less is more.

The controls are simple to master. It's literally up or down on the directional pad. They respond perfectly and never feel like they are letting you down. I can't blame the controls on a missed ball or not being quick enough. Yes, the original used a different type of controller but this game is on the Atari Lynx. No complaints. 🕹

Again, less is more. The aim of the game as stated above is simple. Play a game that is reminiscent of tennis, one ball and two paddles instead of rackets. Hit the ball back and forth with your paddle until someone misses. Out-score your opponent - first one to score 10 points wins. It’s a basic game and it's supposed to be that way. Why? Because it works! It's not taxing on the brain. Any player will get the concept for this game very quickly. It's competitive action - everyone wants to win. We all know there are no points for 2nd place and no one really plays just to take part, we play to win!

There are some extras on Ponx of course. Would it be a Songbird release without some?! Good extras too. You have three difficulty modes - Easy, Normal and Insane. The jump from normal to insane is a huge one, you've been warned! You also have the option to use one or two balls in the playing arena. Two balls are great fun and provides a nice challenge. There's also a two-player mode, that doesn’t require a Comlynx. Yes, you read that right. No Comlynx required. How I hear you ask? Well, its pretty simple and a great feature. Player 1 will use the directional pad and player 2 uses the A and B button to control the paddles. I've never been lucky enough to use a Comlynx so this a great way to share the Lynx with people. You can even play against yourself in 2 player mode (if you’re a bit weird like me). Legend has it there are a few cheat codes around too and I've read that you can add a 3rd ball to the action and play a mode called ‘Evil mode’. (Spoiler alert - you can read about the cheats here.) I'm yet to master insane mode so will give these a miss.....for now!

We found this a hard game to review. It's pure and basic - as it's meant to be. I've tried to just look at it for what it is, not compare it to visually impressive 3D games or games that have an immersive story line. On that basis I can only come up with one word to describe it - excellent! It does everything well. If you have read any of our other reviews, you may know that we're fans of pick-up-and-play games. It's what handhelds are all about. Quick fire fun. This certainly ticks all the boxes in that respect. We can see ourselves playing this game over and over again. A timeless game that’s to be enjoyed for years to come. We will say that if you have no idea what pong is....you may feel a little short changed with what it has to offer; but if you're a true retro gamer – you will love it.

We're putting this section after the final verdict for a reason. The packaging for this game is really sub-par. For such an excellent release, the packaging really spoils the feel of 'getting a new game in your hands'. Why is that? The simple reason that it comes in a CD jewel case. The 'cover art' is actually the game manual too; remember when CDs were popular and you'd buy a new music CD and the song lyrics would be on the inside of the case, well the same goes for Ponx, just with a manual. The cartridge does not sit very well inside the jewel case, unlike a CD would. It would have been better to forego the CD jewel case altogether; it just feels cheap. Which brings us to the price point, which we usually don't cover in reviews, but for a $49.95 USD game, we would expect more than a cartridge and a folded over piece of paper as a manual. 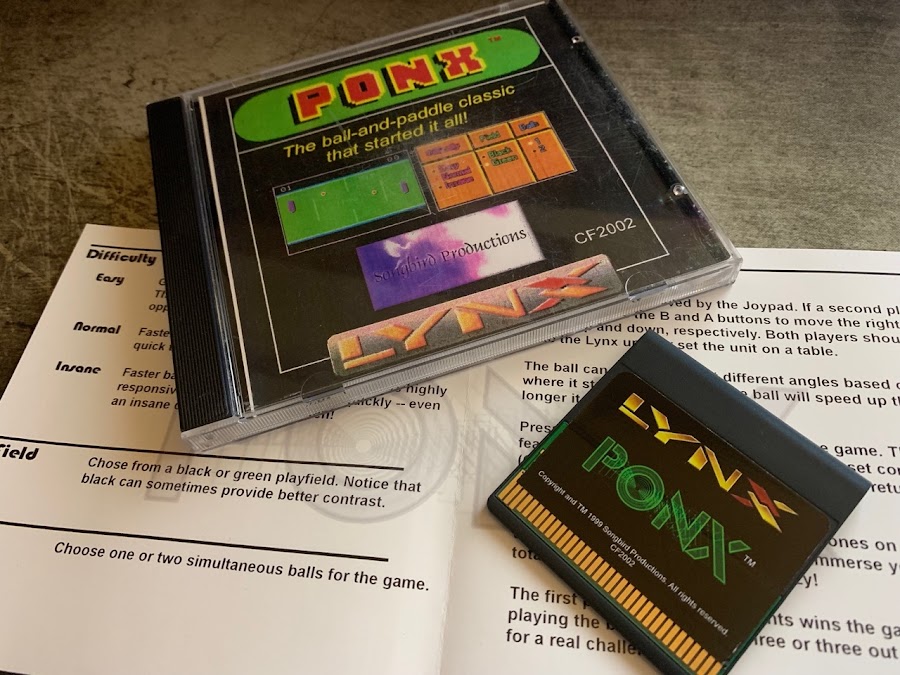