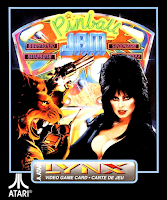 When I was a kid, in the 90's era of newly arriving official Lynx titles, I would always hope for unexplored gaming genres. Where there were once no Lynx tennis games, we received 'Jimmy Connor's Tennis'. Where there were no point-and-click-style adventure games, we got 'Dracula: The Undead'. No strategic helicopter war sims? 'Desert Strike' arrived. It was an exciting time to be a Lynx owner! That's when Lynx owners realised, "Hang on...we haven't seen a pinball game for the Lynx yet!" Well, the wait was soon over. 'Pinball Jam' is the only official pinball title for the Lynx, and it featured two different tables of high scoring action. When you look at it today, you realise that 'Pinball Jam' is once again one of those titles that is absolutely unique to the Lynx, and yet one that could have easily found a home on many different systems and consoles. So, how does it play?

Let's get to the cold hard facts: the eerie looking chick that you find on the box, manual (and in the game) is Elvira, a horror actress from Hollywood and probably one of the best known actresses in that film genre. Oddly enough, while one of the tables is themed about her, we also get a separate table that is based on a police theme; so there's "Elvira and the Party Monsters" as well as "Police Force". This seems a strange combo initially, but the "law and order/ crime" vibe seems somewhat fitting anyway, and doesn't at all take away from the game. But you may not know, these Lynx tables are based on real life pinball table counterparts! Yes, look them up on your web search: the game is based on the real deal. Which is really cool.

I'm going to presume we all know what pinball is. But if you're not familiar with pinball, it's a little difficult to describe what this pastime is about, but basically think about it like this: you send a ball around a tight area of objects (which produce a score) and you try to achieve big points through winding the ball along challenging pathways. The desire is NOT to lose the ball between the two flippers, which results in losing a life (which are limited). Your objective is to get the highest score possible. Got it?

For pinball enthusiasts, you will see instantly that there has been some thought put into what these tables look like. It's a colourful, varied and appropriate set of surroundings for each theme. You'll get the cartoony skulls in the horror table, and police themed colours and effects in the second table. And yeah, stuff lights up! Awesome. The ball is a simple little shape, but the surroundings are full of the kind of neat little touches and animations you'd expect when a ball is propelled around a pinball table. And notably, when it gets right down to it, the game looks the part. You'd fully expect that either of these here tables could feature down in your local arcade, swallowing up coins and causing general frustration (which I'm sure they did). Visually, there are notably a few quirks, however. There's no doubt that the ball can sometimes feel a little lost in the action (there's a lot visually going on). It's not a big enough issue to make the game impossible to play, but it detracts a little from the experience. Still, you probably won't notice this too much, because you'll be just concentrating on keeping that ball (or multi-balls) in the air!

Sound-wise, this is where 'Pinball Jam' truly shines. Speech! Dings! Rattles! Music that changes depending on what bonuses you hit! It is really, really well done. To describe this a little more, you can expect full speech from Elvira's table, from her shouting 'Unpleasant dreams!" at game over, and "Let's party!" at launch. Amazingly, the speech is also super clear. You can expect similar quality in the police table. It's hard not to applaud the game designers for what they achieved here, and wonder why you don't see this quality of sound in other Lynx titles ('Rampart' and 'APB' are good examples of sound done very right on the Lynx). The effects are all finely digitised.

Control-wise, there's really not much you need to worry about when it comes to pinball except to control the flippers, and 'Pinball Jam' performs admirably in this regard. Pinball is certainly a game of skill and timing, and you generally get the feeling that the game is more about this than sheer luck. Just whacking the flippers around is not going to give you the results you need. You really need to be watchful of where the ball is going, or you'll use the wrong flipper and even hit the ball into danger. The buttons and d-pad distribute the controls well, and you can even tilt the table (not too much)! One exciting thing to watch for is when you hit the flippers whilst the ball is in the air, it will alternately change certain lights and targets on the table. The purpose of this is to highlight additional bonus areas to aim for, yielding higher points and opening more table possibilities. So there's plenty to do, and it doesn't take long to learn the ropes.

How does the game play then? There are certainly a lot of positives, which I'll discuss before the negatives. Firstly, this is a pretty good pinball experience. The table plays like the real thing, and the visuals and sound shape right up. Just like 'California Games' and 'Joust', this is a game that invites repeated plays. You'll enjoy trying to progress further and to see what happens next. There are a few negatives though. That ball just feels floaty. The games just feel a bit slow when you play them. I didn't like the pacing as much as, say, 'Pinball Dreams' or 'Pinball Fantasies' on the PC. I would have preferred the option to adjust the speed on the title screen; this would have REALLY helped the experience. Also, as afore mentioned, the graphics can lose the ball a bit, as there's a little too much unnecessary detail. The ability to save your scores, too, is not present in this game, meaning you'll need to note down your scores on paper if you want to keep a record.

Still, despite the troubles, there's a fun game to be had here. It's not perfect, but it is a fairly good example of pinball for the Lynx. It's fun to see how far you can get each game, and the choice of tables certainly adds to the longevity of the game. If you're a fan of pinball and the Lynx, you'll definitely want to check this game out. Even if you're not a pinball fan, you still might well find this game to be a regular play in your gaming journeys. The slowness of the ball affects the review grade in the final count, but the experience overall is a fun, solid and well-constructed pinball experience. "Let's party!"