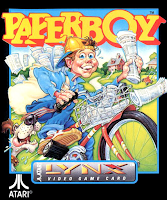 That is the distilled essence of 'Paperboy', a classic arcade game that made its way onto the Lynx for all real life paperboys (and girls) who want to train for the job. I honestly had not played any edition of this game before I chucked this cartridge into the Lynx, and boy was it hilarious! Picture my crazed paperboy character wildly riding his bike, throwing huge shoals of newspapers at houses with glass windows, causing mayhem and chaos for terrified neighbours and civilians. I realised later, of course, that the purpose of the game was NOT to heave these cylinders of doom at anyone and everything you see, but to strategically aim them at the LETTERBOX. You'll be grateful to know that I never once delivered a paper run in real life, and after this game, I'm fairly sure my quiet suburb is safe from the likes of me.

Moving on, 'Paperboy' is known as a bit of a classic retro gaming title, which found its way onto many a gaming system. It's gaming purpose is innovative, to say the least. The whole goal of this title is simply to ride your bike and deliver the paper, trying to keep houses subscribing instead of cancelling their membership. Sounds simple as, right? Except you have dogs after you, kids on go-karts, constantly reversing cars, construction workers in the way, and all manner of other obstacles to face. Hey, maybe it's more true to life than I thought! So let's ride our bike into this comprehensive 'Paperboy' review, and try not to break any more windows.

'Paperboy' is a game that certainly shows it's age; but even so, you get the feeling that the artist worked hard on the visual detailing. Your character (and all the other sprites) are graphically easy to see, and the animation of both the bike and the hazards is pretty well done. No doubt there are nicer games on the Lynx. But the graphics do the job, and the nicest thing about them is the fact that the game has an isometric style to it. Yes, it's initially a bit jarring to have your character ride diagonally to the top right of the screen, but you soon get used to it. The houses look especially good, as do the fun bonus sections at the end of each paper run. There, you'll find archery targets to aim your 'weekend editions' at! But mostly it's about getting those newspapers into the subscribers' letterboxes, or at least onto their front lawn. That will keep them happy!

There's some nice music here in this game, if you can get past the title theme. It's not bad, it just feels a bit old fashioned and dated. That theme, like the graphics, does present a game that was a product of it's time, and so it's to be expected that the first track was going to be a little archaic in some ways. But the in-game music is actually really nice, and it's cool to hear a mini jingle go off when you pick up a new box of papers - great! The most effective part of the audio is the effects. It's awesome to hear car horns, glass smashing, papers bumping off walls, and other appropriate sound. There's no "Hey boy! You broke my garden statue!" though. Hopefully you're better at the game than me and will avoid the possibility of breaking too much in the scenery!

Sadly, if 'Paperboy' falls down in any area, it's the controls. It's not that there's anything inherently wrong with how you wield your two-wheeled menace around. It's more about the collision detection. I felt a bit like I was in 'Hydra' land again: a vehicle game that moved along smoothly, but where smashing into obstacles was far too easy. In 'Paperboy', the problems come where you're trying to negotiate even the smallest obstacles or gaps in the road curbs. Your bike just smashes, and your guy falls flat. There's nothing you can do. It really hurts the game that the collision detection seems so unfair. I didn't mind falling off a few times, but after a while, I began to feel like I would rather read a newspaper instead of throw one!

And yet... there's something refreshingly retro about this game, and there's just enough there to pull you back for another go. After all, you are able to select your difficulty level (paper route) and with the right amount of practice, you will soon get your rhythm going to the extent that obstacles can be avoided with more ease. It's a little hard to stay irritated with a game when the hazards are so amusing. I mean, the skateboarders just come out of nowhere, and I didn't see the motorbikes coming. Come to think of it, if 'Batman Returns' on Lynx was an isometric game, the caped crusader himself would feel right at home in these hazardous surroundings. Just need some bomb clowns to round the area out. I should say, the nature of this game doesn't make me want to try it all the time. Instead, it's kind of a short burst game for me. Fun to play every now and then, but that's it. The routes are a bit too samey and formulaic for me, and the music doesn't change as often as I'd like. But it is a challenge, and it's true to the arcade presentation of the original. That counts for a fair bit in my book.

So, what's the final summation? I wouldn't say 'Paperboy' is my favourite Lynx title. But, it does have an old style difficulty level, and it's enough fun to pick up and play once in a while. By far the most funny thing about this game is that the paper routes are about as safe as a factory that follows no WH&S or company safety policies and hasn't been audited since 1954. If I ever had a paper route like this. I'd forget this job and try get a role at a pizza shop. At least then I'd be able to eat the leftover pizza rather than come home from work looking like one! 'Paperboy' is a good game to play on those slow train rides through the city, and it certainly won't befuddle you with complex play instructions. Arcade fans will probably love it, and other players will likely enjoy this quaint journey through gaming history. It's not perfect, but it definitely has its moments. After all, I -

(This review ended with the reviewer suddenly knocked unconscious by a huge, limited edition newspaper. The last thing he heard was "HEY MISTER!")