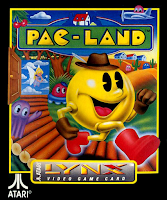 Fun fact: the Lynx has not one, but two Pac-Man games! This is a surprise to many, because the ever popular ‘Ms Pac-Man’ is generally the most talked about Lynx game featuring a round yellow chomper. But here, rather than being about Pacster’s wife, this game features the more prominent member of the Pac-Man family. That is, Pac-Man himself. Though Ms Pac-Man and PAC-baby do have a cameo role here.

Where was I? Ah yes. ‘Pacland’ is another arcade coin op conversion that made its way to the Lynx. It broke the Pac-Man mold by being not a maze runner, but a fully fledged platformer which teased players with a ‘how far can you get?’ gaming mechanic. The game was actually translated to a number of consoles, and took a variety of different forms. So let’s look at how the Atari Lynx performed as a conversion, and whether it is worth your time.

The goal of the game is to reach the end of each stage and to transport a fairy (who is under your hat) to safety. Then, once you complete a number of waves and return her to a flower garden, you must return Pac-Man whence he came to meet with your family. And then you repeat this process for the next set of stages...and on it goes.

Graphics in ‘Pacland’ are beautifully cartoony and they feel like you are watching the Saturday morning cartoon! Some might say they are TOO simple, but they are extremely faithful to the arcade (not surprising given the Lynx’s track record on this). As you walk Pac-Man along, you’ll see the familiar ghosts, and here they are driving cars and riding planes (or on pogo sticks)! Grab a power pellet and you can hunt them! The brightness of the palette is very refreshing and there’s even some nice parallax scrolling.

The music and sound is really good. Grabbing a power pellet, jumping, finishing a level and other activities bring a cacophony of great sounds. The level music themes are also very good, and you may find that you recognise some of them! Yes, the Pac-Man theme plays loud and clear, and it’s very well done. One of my pet peeves is games with little or no music, so I was relieved on this count that the game designers had included some ripper tunes.

Control-wise, ‘Pacland’ is mediocre. It’s easy enough to walk, but the speed is pretty slow if you do this (and you do have a timer). Running will give you a faster pace, but it becomes harder to jump accurately over the hazards. Due to the tight platforming nature of the game, there are points where you’ll need to run and then walk and then run again...yikes! When it’s one drop til death and the platforms are tiny, the precision this takes is intense. Thankfully, it can be done with practice. After all, the point of the game is really to get as far as you can because... because...

...you can’t FINISH this game! And this is probably my biggest criticism. The TurboGrafx edition of this same game has an ending! It couldn’t have been too hard to do this. I might sound crazy, but speaking as a HUGE platforming fan, I have a big problem with this design decision. When I bought this game, I couldn’t understand why I was making no discernible progress until I researched that the game just goes on and on...even to Level 99 (and presumably past that). I don’t have an issue with games with no endings (like ‘Joust’) but it seems like a strange choice in this case. I was certainly put off playing for lengthy periods as a result.

In conclusion, ‘Pacland’ is another addition to the list of okay Lynx platform titles. It’s very faithful to the arcade, so if you loved the coin op, you’ll get great nostalgia from playing this well made conversion. But for those who are playing ‘Pacland’ for the first time, you may find the game is held back by odd pacing, less than straightforward controls and no real ending to the adventure. Don’t get me wrong; ‘Pacland’ is not terrible by any means. It’s just that the Lynx has better examples of platform games out there, and I’d only invest in this one if you were a collector or nostalgia buff. There are nicer platforners out there, in my view, to satisfy your jumping desires.