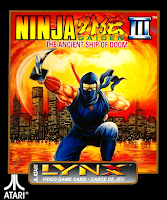 I begin this review with the acknowledgement that a few people may disagree with me on this game. "The sprites are too small!” “It’s too hard!” “The enemies are placed in cruel, trolly positions!” All true criticisms. But hey - it’s ‘Ninja Gaiden III!’ Hey, that's what 'Ninja Gaiden III' is all about - smallish characters, tough challenge levels and nasty little surprises! So the Lynx absolutely preserves the quintessential ‘Ninja Gaiden-ism’ of the original game, whatever that is. Sure, there are a few issues along the way. But we’ll get to that. Welcome to this 'Ninja Gaiden III’ review, which is about one episode of a gaming series that I find to be a personal favourite. But as always, I will try to view the game impartially and by its merits.

‘Ninja Gaiden’ is one of the most well-known platforming series in the world, though it’s certainly not as popular as the Nintendo ‘Mario’ series or perhaps the ‘Rayman’ series (neither found on Lynx). It involves the ninja Ryu and his journeys to (basically) defeat weird monsters across the world, whilst meeting up frequently with his love interest Irene (who ends up on the deceased list in this game). In fact, ‘Ninja Gaiden III’ is about Ryu being framed for her murder and trying to make some sense of this event, whilst being confronted by mysterious figures in his past. It’s better to know a bit about the story of the last two games in the series to understand much of the adventure, but then, you don’t really need to in order to enjoy this game. By the way, this title in NO way relates to the other Lynx ‘Ninja Gaiden’ title, which is a stand-alone, arcade scrolling beat ‘em up. Though I must admit, I would have loved to see the morbidly obese bearded men from THAT game to appear somewhere here, ready to whack you with tree logs (read my ‘Ninja Gaiden’ review to find out more about that).

I digress; graphically, ‘Ninja Gaiden III’ is an authentic translation of the PC and console classic game. I was shocked and surprised that they managed to cram the entire game in (including the cutscenes). But they did it. In order to capture the same feel as the other translations of this game, the entirety of the Lynx screen is used to maximum effect. This means that the score, the life bar, the timer and all the other details are crammed into the action on-screen. This results in Ryu and his foes being pretty small sprite-wise. Some backgrounds and foregrounds kind of blend, which can be confusing, especially when enemies are oddly pale and the power-up icons are difficult to spot. All of this takes a little while to get used to, but soon you will know what to expect. It’s nice to see some background animation and big bosses too; something we don’t see enough of in Lynx platformers.

Sound-wise, it’s great that ‘Ninja Gaiden III’ has a number of different tracks depending on the stage you are visiting. The music is not as good as some other Lynx games admittedly; they can sometimes reduce into odd whirs and sirens, and the variation in track quality is pretty marked. Some is great, some is pretty awful. Then again, the ‘Ninja Gaiden’ series was never known for its music, but rather it’s gameplay. The sound effects are actually pretty good, particularly the sound of your sword swinging. Loved that. It sounds even better than the original Lynx beat ‘em up side-scroller! Some unique effects do pump the sound rating stats up a bit, but like I said, it’s a bit of a mixed bag which sadly ventures a little too close to the negative side for my liking.

So if the graphics aren’t perfect and the sound is so-so, what of the gameplay? Well, the way you see ‘Ninja Gaiden III’ is going to vary a lot depending on your views of both the translation itself and also the gaming series as a whole. If you hate the series (not many do), you ain’t gonna like the game. But if you love the series, you’re either going to see the game as (1) lacking in polish presentation-wise, or (2) an achievement of condensing the core qualities, feel and challenge of a Ninja Gaiden game onto the Lynx. And you know what? I fall on the (2) side here. Sure, the game isn't perfect. But does it have the dragon crystals and their power-ups? Yep. Can Ryu climb walls, throw shurikens and flip in the air? Yes he can. Are all the awesome cutscenes included? You bet. This is 'Ninja Gaiden III', just minimised for the small screen. And whilst the game loses some marks for the visual and sound issues, it plays just like the original. Nail-bitingly hard, a huge number of levels, tough bosses and, hey, bring your quick reflexes!

'Ninja Gaiden III' is a must for fans of the series, because it's so impressive they managed to pull this game off. It's just how I remember the famous game, down to the weird foes and the diverse weaponry. I take the criticisms I've read of this game seriously, as much as I like it, and that comes out in the final score. It's not a game without its faults, but there's a decent platformer here for those that like their challenges. If you can beat this game, you truly belong in the top tier of platform game players; for any console. The cutscenes and the climbing skills just give me a big smile whenever I play this game, and I think you might like it too. Grab your katana and get going!