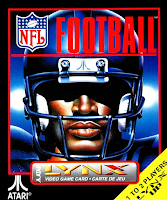 The Lynx has its share of sport titles, which is a really good thing for sporting fans. We are spoiled, really! But before 'NFL Football', there was no gridiron gaming in the Lynx at all; so the announcement of this title was a real boon for the system. And, to make things even better, it had the official NFL backing as well! Unfortunately, something feels very wrong with this game, and I hope the review breakdown from the following two qualified Lynx commentators will explain things. They are experts in their respective fields, and have a fair idea about good sports game mechanics. Over to you, host Ata Ri and former referee, L.Ynx.

L. Ynx: “I just rage-quit for like the hundred and sixteenth time playing this game. No, I'm not proud.”

L. Ynx: "I don't understand it. Look at the playback! The graphics are really, really good. Cutscenes! Bright colours! An easy to see field! Looks nice! This game should have had it all."

Ata Ri: "What about the sound?"

L. Ynx: "Sound is fine! I have no issues with the sound, man. It's great to hear the crowd effects. The kick of the ball. Even the occasional bit of speech. I mean, that's more than what a lot of sports games get, right?"

Ata Ri: "Well, the Lynx has a lot of high quality sporting titles when it comes to graphics and sound; but it sounds like this game at least is equal them on those counts, right?"

L. Ynx: "At large, yes! But 'NFL Football' in no way matches them, or comes close, when it comes to controls and gameplay."

L. Ynx: "The game is so hard to control! It's almost impossible to get any points! Even when you know the objective of this sport…I mean, any player is going to find it challenging to get constant losses against them, again and again and again and ag-"

Ata Ri: "Right, right, I get it. Like, when players try to pass the ball, they have to be standing still. And even controlling passes is a weird control scheme involving the holding down of a button. And all the while opponents tackle you relentlessly for the pigskin. There is little chance to escape their takedowns.”

L. Ynx: “Right. And I thought hey, maybe I’m just a bad player. And you know what? I probably am. But it seems like heaps of other reviewers have found these issues with playability too. The controls just seem a bit of a mess.”

Ata Ri: “So what do you think would have made this game better?”

L. Ynx: “You know, there are games like ‘Battlewheels’, ‘Stun Runner’ and ‘Cybervirus’ that show the whole first-person style, scrolling and scaling thing can work! I mean, couldn’t we have had a front view of the game? Rather than a top-down view where the players just meld together like a big clump?”

Ata Ri: “Maybe that would work; hey, maybe not. But anyway, putting that to one side: is this a game you’d see yourself playing for any time period?”

L. Ynx: “You know what? I tried it LOTS of times and got nowhere. And a game that just relentlessly punishes you, and is hard to control, and - look - it is not a fun feeling I get. I wanted to like it! I gave up on it though, after a long while of trying. I’m playing something else instead!”

Ata Ro: “Well, thanks for your time. What are you gonna play next?”

L. Ynx: “A game where I have the chance of at least scoring one goal!”