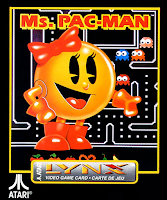 “Wokka wokka wokka!” That sounds like everyone’s favourite Pac-Man eating dots and... no... wait... I see lipstick and a red bow, which means it’s... MS PAC-MAN! Yes, sir (I mean ma’am). Not only did the Lynx score a version of ‘Pacland’, a horizontally scrolling platformer, it also managed to snag its own version of the classic ‘Ms Pac-Man’. That makes us Lynx gamers pretty fortunate, because this is one classic game; just shrunk down to a handheld size. Let’s take a trip down the retro memory lane and gobble some dots... it’s time to review this game to the hilt!

History: the games ‘Pac-Man’ and ‘Ms Pac-Man’ were arcade titles from the days of yore; but they soon found themselves on pretty much every console imaginable (bar a few fringe exceptions). Me? I saw ‘Pac-Man’ first on the PC, and the game was instantly familiar. You control a chomping yellow circle, swallow the power pill to eat the ghosts, and try to devour all the dots (and the occasional piece of score-multiplying fruit) to advance to the next level. ‘Ms Pac-Man’ is almost exactly the same as the original ‘Pac-Man’ gaming title and starts from the same simple premise; but thankfully, it does have some distinctives that make it just that little bit special.

There’s not much complex or mind-blowing in the visual appearance of ‘Ms Pac-Man’. You won’t find a lot of detailed graphics here. What you will find, however, is a brightly coloured little game that looks vibrantly fresh (particularly with the McWill mod). From the simple title screen you are thrown pretty much straight into the action, where you’ll see a starkly drawn (but colourful) maze of dots, ghosts, power pills and... you. It’s just a matter of controlling the d-pad to send Ms Pac-Man off to eat dots, with the goal of avoiding the ghosts or eating them (after chomping a power pill of course). Just like the classic original ‘Pac-Man’, the ghosts will return to their “base” until they get out ready to lunge at you again. So you will be on your toes constantly in order to beat the level (by eating all the dots) and reach the next maze!

For those used to a big screen, the main visual complaint about ‘Ms Pac-Man’ will be the small size of, well, everything. Ms Pac-Man herself is tiny, as are the ghosts, so it may feel a tad jarring how the game designers crammed each maze onto one small screen. Then again, it must be said that this was really the only sensible way to do it. Putting in a scrolling maze, where the action slowly moved with your character, would have ruined the key ‘Ms Pac-Man’ dynamic of being able to see ALL the action in front of you. And thankfully, for its miniaturised representation, the same full colour action that graced the original game is here, with smooth animation, bright hues and a true sense of fun. You’ll see bouncing fruit, smooth level transitions, and hilarious cutscenes between levels that even chronicle the Pac-Man and Ms Pac-Man romance!

If there’s something that’s noticeably better than the simple (but effective) graphics in ‘Ms Pac-Man’, it’s the awesome sound effects. This is the Lynx truly playing to its strengths. The sounds of dot chomping, the power-up tones and the various other noises are all brilliantly executed. I really felt like I was back at the arcade as I munched around the scenery, ate the various fruit power-ups and scored the (rare) extra life... once I racked up 10000 points! There’s no “in-level music”; audio tracks only really emanate when there’s a cutscene. But honestly, I’ll go out on a limb and say that you don’t need music in a game of this nature. It would only distract, and the various ‘Pac-Man’ game incarnations never really had music either. It’s certainly nice to see another Lynx game title that once again shows how well the Atari Lynx does arcade sound conversions.

So how does the game control? Very nicely. You only need to use the d-pad (90% of the time). This will guide Ms Pac-Man through the various mazes, and quick presses will turn corners. The only time you’ll use a button is when you score a power-up and want to activate it. Yes, the Lynx version of ‘Ms Pac-Man’ did get one very special inclusion; a “lightning bolt” power-up that temporarily makes your character super fast. This is a cool addition, and although it lasts for a short amount of time, you’ll risk bow and lipstick to get it. All up, the controls are highly dependable and make your journey easy, even though you’ll know in the back of your mind that those ghosts are gonna get you eventually... you just have to see how high a score you can achieve on the way!

So are there any downsides to this very popular game released to the arcades in 1981? Well, the lead-in sentence I just wrote should hint that this is an OLD game. It doesn’t feel very modern, both in how it looks or how it sounds. But, here’s the thing... it does feel timeless. The designers really made sure this game was faithful to the original. Plus, there are some great customisations, like being able to choose a more advanced level or a larger map size - really cool. Sure, you could argue that the stages look similar to each other, and that the game doesn’t have a lot of variation. But the original was simple in its premise too, and look at the legacy it has; you can even watch Pac-Man on Netflix today! Naturally official Lynx games like this one can’t save your scores, but you can always take a photo of your points; just like the arcade, right?

The conclusion that can be made for ‘Ms Pac-Man’ is that, really, it’s pretty great. If I could talk to the people involved in porting this game to the Lynx, I’d say “Well done”. The original concept is here. The four ghosts are present. The action is fast paced and frantic. The sound rocks. And there’s some nice little added customisations to round out the experience. Though it feels dated when you compare it to the modern games of today, it’s still a pick-up-and-play classic and a compulsory title in the Lynx library. It sits very nicely along ‘Robotron 2084’ and ‘Joust’, and is “A grade” all the way. Move over Pac-Man, your future wife just outshone you in on the Lynx. This is a class title. Get chomping!