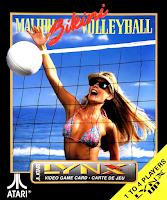 Grab that volleyball because it’s time to play! Yes, this is the Lynx’s first, last and only volleyball title. It’s an invitation to ‘set’, ‘dig’ and ‘spike’ that ball into the opponents’ court in a doubles match on the beach. Bring your togs! Because... um... the title kind of implies that there ain’t gonna be any heavily clothed sporting activities here.

First things first, though; I gotta say, no Lynx game has divided me more than this one. There are a lot of good qualities to this title, and with it being from Hand Made Software, my expectations were always going to be high. I mean, these are the same people behind ‘Jimmy Connors Tennis’, ‘Awesome Golf’ and ‘Dracula: The Undead’; all games in my personal Lynx Top 20 and ranked 8.5 or above in my reviews. So in approaching this game, I’ll try and explain why ‘Malibu Bikini Volleyball’ receives a score lower than these other classic titles, and why you may (or may not) agree with me on that.

Graphically, if you ever wanted an authentic volleyball experience, this game provides it. It looks terrific. Digitised title visuals? Yes. In-game graphical greatness? Yes indeed! The beach sand and the net looks awesome, the sprites are smoothly presented, and all the in-game text looks really appropriate for a game of this kind. You really will feel like you are playing your Lynx at the beach with this one. Did I mention background animation too? Sailing ships slowly sailing sunward... try saying that. Plus sometimes, crowd animation. Big thumbs up also for the nicely scaling coin toss before the game; a good touch like that doesn’t go unnoticed!

Sound, too, is pristine and clear. Sadly we miss a glut of that kind of audio speech that really enhances ‘Jimmy Connors Tennis’ and ‘Awesome Golf’. A bit of a shame. But as a concession, you get better music than both of those titles! ‘Malibu Bikini Volleyball’ has an amazing set of tracks, and you can even adjust them on a special in-game radio if you like. Sound effects are minimal but effective. In all, there’s some really lovely little aural touches to this game which make it stand tall among both the older and newer Lynx titles.

Control-wise, there’s lots you can do in ‘Malibu Bikini Volleyball’. Even before the game starts, there are options aplenty in this game. You can choose the length of the game, the soundtrack playing in the background, the points needed to win the game, the speed, the match type... it’s very customisable. And, because the game uses the same “square” system as ‘Jimmy Connors Tennis’, you can choose whether you want the game to tell you where the ball will land each stroke (so you can position yourself). I’d advise you keep that option on! In-game controls are easy to get used to, and playing the game as a non-volleyball player is simple and straightforward.

So what are the issues, if any? The problems lie with two very specific problems; one, there’s not a huge amount of replay value, and two, your teammate is not always very good.

Now, these aren’t game-breaking issues, and I’ll tell you why. In terms of the first issue, the teammate AI is generally okay. But, in a problem that also affected ‘Jimmy Connors Tennis’, your teammate is up and down when it comes to skill, and can often flat-out miss. This mattered not so much in ‘Jimmy Connor’s Tennis’ because it only affected doubles; here, you have no choice but to play with a computer-controlled teammate. See the issue? I dunno, maybe I’m the only one that found this problem and felt it spoiled some of my fun. But to me, as someone who played the game for quite a long time, the issue came up a fair bit, and did affect my enjoyment.

The other issue, replay value, comes from the fact that once the game is over, it’s over. It is a pity there couldn’t have been some more “out there” courts, bigger tournaments, or perhaps some in-game customisable sand targets that yielded extra points. I realise this isn’t within the rules of volleyball, but these little additions could easily have enhanced replay value if they were accessible via password after completing the game. Hey, I would have easily revisited a game later on if it did that!

Still, even for these quibbles, I can’t fault this game a lot when it comes to the overall presentation. It’s fun. It’s bright. It’s the Malibu sun, it’s fresh air and beach. There’s not a lot to hate when you get to play with graphics this good and sound this terrific. It's actually quite a relaxing title to play, and a break from many of the more frantic Lynx games out there. You do learn to accept the limitations of the AI as par for the course of playing with a teammate who, lets face it, will make at least 75% of the mistakes that you do. And really, this is a great game to play on vacation!

Overall, ‘Malibu Bikini Volleyball’ is a cool jaunt to the hottest Malibu volleyball beach in the city. Even though it doesn’t reach the soaring heights of ‘Awesome Golf’ and other great Lynx sport sims, it is still a great little game that will test your skill and give you plenty of control over how you play the game. Definitely a recommended title for sports buffs in particular. Even non-sport players will find this title a bit special, particularly because it shows what the Lynx can really do. It’d look great with the McWill mod. Heads up… “spike!”