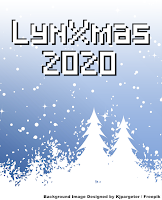 LynXmas 2020.....Ok so what is this cart all about. A new cart with 7 games for $15 bucks. Seems too good to be true. Considering the price of most Lynx items there must be a catch.

After a bit of reading, I discover this cart consists of games developed for a Game-Jam. What does that mean I thought? Well, it turns out that Atari Gamer and others ran an event, a 'game jam', and game developers / Lynx fans were invited to make a game for the Lynx. A mini competition just for fun and giggles. All based on the holiday season. 🎄 Contestants only had 15 days to submit their entry, which to me, someone who just plays games sounds like a tall order!

I thought to myself these games were probably made by people who love the Atari Lynx. Well, hopefully anyway. I also love Lynx - so it was obvious I needed this! The cart was ordered and swiftly shipped out.

It's always nice to receive a new cart, but at $15 bucks I'm wasn't expecting much. First impressions - this is a nice cart. It has the Lynx curved lip and a professional looking game label. The artwork on the cart has a definite Christmas vibe. I wish it had a box for the collector in me, but at this price I knew I wasn’t getting one. Edit: a boxed version is not available from the Atari Gamer store.

In goes the cart and you are met by the Atari Gamer Logo. Then comes the game menu. The menu is very impressive. It's bright, colourful with plenty of detail and little touches of Christmas. You have a set of instructions on how to select the games on the left-hand side of the screen. You scroll left or right and select the game you want to play. The game you stop on will be highlighted. All the games are in their own mini-Lynx box! A nice touch is that when you stop on a game, the title will show at the bottom of the screen along with the name of the developer. The games are all what are best described as mini games. Here is a brief description of the 7 games on the cart. I'm not going to score each game and will go into why later. I will pick a personal top 3 though!

Why is it called naughty? Because its 1 v 1 combat against Santa! This reminds me of a boss battle. You fight a large Santa by throwing snowballs at him. You must avoid touching him and his thunderous jump. He also swings what I think is a rather large bat in your direction. Nice. I'm yet to beat the fat man in the red suit. This game also displays a letter to Santa, the letter will make you giggle. No presents for whoever wrote it - I can guarantee you that! 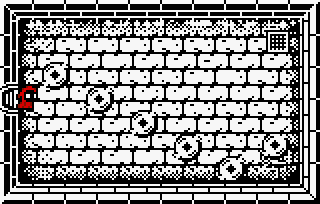 You play an Elf called Red. Your mission? To stop Evil Santa from cancelling Christmas. A Dungeon type crawler game. There's over 20 levels to get through. Each ‘level’ is a room where you must collect a key and make your way to the exit. There is a trap in each room, the further you advance the more traps you have to deal with. Get hit and you will leave a blood splatted mark on the floor and restart the level. Now that doesn’t sound very festive does it......but remember your mission is to save Christmas! 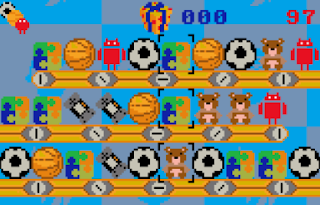 Time to get to work at the Santa Factory. This game is a puzzle type game. There is a moving conveyer belt displaying the toys, which I guess are being made by elves at the North Pole. There's even an Atari Lynx on the belt, someone's getting spoiled this Christmas! The aim of the game is to match the toys to the order displayed on the screen. Not as easy as it sounds. There is a timer and mistakes are costly. There are 2 game modes to try including an arcade mode. Get the order right or its game over! 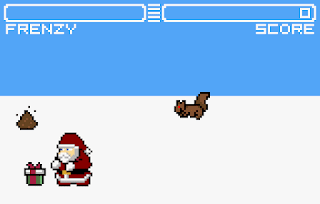 This is not the Lynx's version of the C64 ‘stroker’ game – so stop those thoughts now! A pesky squirrel has taken all the presents from Santa's sack. You play as Santa, the aim is to try and get back the presents which have been taken. Presents will appear on the screen, try and pick them up before the squirrel gets them! The squirrel won't hurt you by bumping into you. What he will do though, is poop all over the screen - step in the poop and you slow down. This gives him a better chance of getting to the presents! Avoid the poop! Oh and enjoy frenzy mode – things get a little crazy! 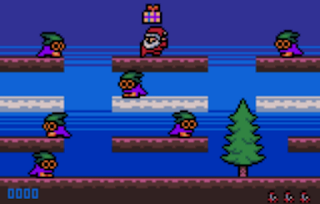 The Christmas tree is bare! Why? ...because Leprechauns have stolen all the decorations! This is a platform type game. There is a tree on the screen and you must decorate it. How? By smashing Leprechauns with presents! Pick up the wrapped presents and throw them at the Leprechauns. This will stun them and a decoration will appear. Get this back to the tree and repeat until it's the tree you have always wished for! Watch out for flying enemies they are faster than you!

Snowball fight! That’s exactly what this game is. You play at the bottom of the screen and your rival plays at the top of the screen. You then proceed to throw snowballs at each other. Sounds like a fair fight. Not quite, your rival will pop in and out of view. You must guess where he will appear next. Hit him for points. If he hits you prepare to lose a life!

This was a difficult cart to review. The games were made for fun, in 15 days for people to enjoy. I'm not going to give this cart a score like a cart that has been officially released. I don’t think it's appropriate to score a cart like this on graphics, sound etc. All the games are fun for what they are. If I had to choose a top 3 out of the games available, I would pick Red, Santa Factory and Saving Santa tree. The only score I would give this cart is 10/10 for value. Is it a cart that im going to play every day, probably not. I will play it from time to time as it is pick up and play fun, especially around the Festive Season. 🎄🎅

So, the only question left is – Would I be happy with this under my Christmas tree? Most definitely.

I look forward to the next Game Jam creations. It's guys like these who keep the Atari Lynx alive. (and of course fans like us who buy these games to keep the cycle going!)