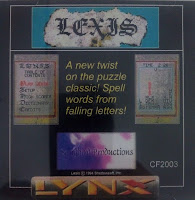 Ah, Shadowsoft. The company who brought us ‘Joust’ and ‘Robotron 2084’ on the Lynx; two terrific arcade classics for the gaming library. But what’s this? An unreleased game? Yes my friends, what we have here is a shelved game from Shadowsoft; ‘Lexis’! And in my humble opinion, it’s a title worth investigating. Break out your thesaurus and your Scrabble tiles, and let’s get on with the review!

‘Lexis’ is a game that was originally sourced from Shadowsoft and then licensed to Songbird Productions, a group which has put out some extraordinary aftermarket titles and (let’s face it) played a key part in keeping the interest in the Lynx alive. The game is essentially a lot like ‘Tetris’, but with a twist! Instead of falling blocks, you get falling letters; and the goal is to make words! Just like ‘Tetris’, the challenge will gradually ramp up and those letters will begin to fall faster, so get ready to grow tense (as well as learn more about literary tenses!).

Like the car brand Lexus, the game ‘Lexis’ tries to push forward an air of sophistication; and there are some lovely visual touches. The title screen takes you to a large red book, which opens up to reveal the in-game options and, later on, this book’s pages are the surface on which the game is played. There’s even an in-game dictionary within this book that you can read, if you’d like to know what words you can use! The idea of the game being housed inside a book is creative presentation (though the grey colour of the background and basic fonts aren’t that exciting). Wait til you see the pages turn though; it’s a nice little effect!

Sound-wise, there is no music to speak of here. When you think of how integral the music was to fellow aftermarket puzzle game ‘Loopz’, you may begin to feel discouraged by this. But ‘Lexis’ pulls an ace by giving some of the clearest audio speech on the system, as well as some terrific and very different sound effects! A friendly female commentator will tell you what kind of “page” (level) you are playing; which will indicate what to get ready for. Trying to match the challenge of this game is hard, but the speech in particular keeps you alert to what is coming next. And the sound effect when you clear a word - awesome!

As for the controls, did I mention that this game must be played vertically? Yes, like the classic Lynx puzzler ‘Klax’, get ready to hold your console sideways (and to look weird to people on the bus). It’s not my preferred way to hold the Lynx, but there it is. As you play, the letters fall slowly enough; but you can speed them up if you are confident of their position on the page. Plus, you can spell words in reverse - eg. ‘cup’ or ‘puc’). Letters that make a word will vanish, sometimes causing other letters to fall down the page (and occasionally making new words). Speed is key here; you need to pre-plan words you want to write, to clear the page quicker. Vowels are scarce; this game is no pushover!

‘Lexis’ is made better by the many customisations. It’s fantastic what you can do; you can set difficulty (challenge), the letter drop width, the game mode, and so on. Sadly you can’t customise the visuals or sound which, admittedly, are a little drab. I would have liked different kinds of books and fonts as you go up a level, and that sort of thing. But ‘Lexis’ comes up trumps in the gameplay stakes. The idea of matching letters to make words in a ‘Tetris’ format is just brilliant. And if you’re a crossword fan like me, you’ll love the taxing challenge of making words and clearing lines.

All in all, ‘Lexis’ is a fantastic title that puzzle fans and “literary types” will eat up. It’s probably not going to appeal as much to those who like fast-paced action titles, but I’d encourage you to give it a whirl. Yes, it lacks in-game music, and the visuals could have been beefed up. But the gameplay is right on, making it a great “just one more go” challenge. And hey, as an added bonus; you just might learn some new words. And how many games can claim to promote mastery of a language? Chuck ‘Lexis’ into the Lynx for an erudite gaming experience; see, it’s rubbing off on me already!