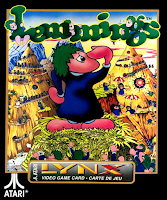 When I was young, my siblings and I visited the local Kmart store and purchased the game 'Lemmings' for the PC. None of us read gaming magazines, so we didn't know what we were getting ourselves into; truthfully, we just liked the cartoony creature on the front of the box! As we were soon to find out, the cuteness of this Lemming itself was in stark contrast to the fiendish traps that awaited it within the game. And on first try of this game way back in the day, I was hooked!

Lemmings is a puzzle game that, upon release, was unlike anything else that had come out before, and influenced games of its kind for years to come (including the Lynx game Dinolympics). The idea is to save hapless little creatures - Lemmings - as they wander aimlessly around the environment, avoiding traps and giving them roles to help them escape. At the time it was made available, the game was so successful that it was ported across multiple gaming machines and consoles. Including, somewhat surprisingly, the Atari Lynx!

If you have any familiarity with Lemmings on other systems, you may be asking: how could the Atari Lynx handle a game with such small sprites and over one hundred level of complex puzzling? The answer is, the Lynx manages this game amazingly well.

After a cute and visually impressive introduction, you are able to select from many different options, including sound settings, passwords for later levels (much needed!) and level difficulty; then, the dreaded trapdoor will open and it's ready to get rescuing those Lemmings!

At first, the Lemmings will walk harmlessly back and forth, bouncing off walls and (if you don't watch out) falling off cliffs. It's your job to give them special roles to help them to escape. These include such skills as climbing, floating, pounding walls…and even using a pickaxe! Sometimes you won't get full access to certain skills, so it will be up to you to find a way to escape; and rest assured, your way won't always be the only way. Keep your eye on the timer though: once it runs out, you've lost the level!

Graphically, Lemmings is nice to look at; not spectacular, but that was never the point anyway. The main thrust of the game is how you experience the whole package. And this includes some smooth animation, colorful sprites, nice cell shading and real level variety. You'll be digging and punching your way through dirt, wood and some unusual looking materials on your way to the goal. Exits have flaming torches, there's some snappy 'zoom in' dynamics at the beginning of each level, and the traps that can catch the Lemmings are humorously animated (if a little dark!)

Sonically, the game is also spot-on. The same tracks that graced the other ports of the game have made it to the Lynx, and each of the tunes shine in their own way. Some will make you feel frantic as you fumble with what to do next; and that's kind of the point! The appropriate tension is put in place to drive you to make quick decisions, which is one of the main challenges of this game.

Which leads to the controls, and where the developers of the Lynx port had to make an interesting design decision. If you are completely unfamiliar with this game, you will probably not realize that this game traditionally placed the different Lemming abilities at the top of the screen, so that gamers could quickly click on the option they desired. As the Lynx screen is much smaller, it was decided that Lemming abilities should go on another screen, accessed by pressing a separate button. With this pressed, a new 'ability' screen appears and the in-game action stops, giving the player time to consider what to do. This is very different to other Lemmings ports, where gamers were required to make split-second decisions whilst the torrent of action continued on-screen. Funnily enough, this change in the core interface is not necessarily negative, as it gives players time to really think about the options. It feels very natural, and as an experienced Lemmings player, I never felt like the gaming mechanic was disrupted. Controlling the crosshair to select each Lemming is not as easy as using a computer mouse; and let's face it, things were never going to be as easy as that. But after a while, using the Lynx d-pad feels easy enough, and button presses become second nature and enjoyable during the midst of the chaos that faces you in each level.

In conclusion, this is a winner of a game, and one that every Lynx owner should own; if only it weren't so rare! Yes, this is a tough game to get hold of, but well worth it if you can. The appeal is so broad that even non-puzzling gamers will appreciate it, and the young and old will appreciate both the cute appearance and the cute puzzles that lie ahead. Get rescuing!