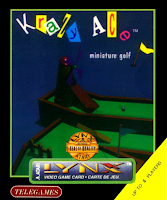 Let's explore what hits you right from tee off. 'Krazy Ace Miniature Golf' immediately has a nice looking title screen and catchy music, before providing players with a limited number of options. You can choose the colour of your golf ball and give yourself a name to play under, but that's about it. Then it's time to play a succession of nine (9) holes. Well, seven (7) holes. Because the last two are repetitions of the first and second holes. Hmm… I mean, 'Awesome Golf' had, like, how many? And different countries to choose from? Anyway… we'll get to that a little later. The simple fact is, you'll get thrown pretty much straight into the action from the word go, and the controls and nuances of the game are pretty easy to figure out without the manual.

But first, let's talk the visuals of this game. And these are kind of a mixed bag. The fairways are a nice shade of green, and the ball and hole are always visible; those are good things! The obstacles, on the other hand, can seem a little odd to look at. Sometimes, they even appear like they were drawn in a big rush! The animation is occasionally choppy (the scrolling ducks are disconcerting) and there's a jarring mix of black and colour outlines on the sprites. For all this, there are definitely highlights, however. The constantly shifting hole in one course certainly provides a good chuckle, and the clown's dancing teeth in the first level provide some amusement. The creativity of the holes is easily the biggest strength in 'Krazy Ace Miniature Golf', though how this is represented to players graphically is kind of up and down.

Sound-wise, there is really no music at all except for the title and options theme, which is quite nice, and it more or less gets you into the action. Effects are minimal but certainly not terrible. They're just not outstanding either. There are water splashes, cannon blasts (yes), and a nice rebounding noise as your ball hits different surfaces. Occasionally you might also hear a kind of jingle once you do something significant, like hit a ball into a clown's mouth (thankfully not a real life clown). Funnily enough, this level reminded me so much of the mini-golf laughing clown sculpture in the movie "Happy Gilmore" that I almost expected Adam Sandler to jump out and whack it's nose off, screaming "I DON'T HEAR YOU LAUGHING NOW!"

In terms of controls, I must say that I didn't mind them at all. The ball is hit with the 'A' button, and can be putted harder or softer depending on how long you "stretch" the white-dotted aiming line. This was a good choice of control scheme given the sport. The physics of the ball can occasionally feel odd, but largely it's a commendable effort. It certainly doesn't feel unfair too often. Better yet, the hit detection of the hole itself is actually pretty generous, without being too easy. The courses themselves really do pose a challenge, and you will find yourself getting both a "hole in one" as well as being "maxed out" (taking six strokes and automatically moving to the next round). In totality, I must say that the controls are pretty good. You can't pause the game though, which is a bit weird. I don't think I've ever encountered that in a Lynx game before!

But having a non-operational pause button is not the weirdest thing about this game. No, the strangest thing is "Why did they repeat the first two courses as the final two holes?". It just seems like a bizarre decision, because nothing remotely new appears to be added to these holes the second time around. The designers could have easily done SOMETHING to mix these holes up; how about switching the colour palette from day into night, or adding more obstacles? And once you actually finish these last two holes, the game gives you one last look at your scoresheet before transporting you straight back to the title screen. No "Well Done!", no fanfare, no high score screen… nothing! It's an odd conclusion to the game that brings zero closure to the player, and a lacking sense of achievement.

Which leads me to consider the conclusion statement for 'Krazy Ace Miniature Golf', and I have to say, I'm kind of ambivalent about it. As a game, it's actually not too bad; so it gets an extra half point due to the fact that you'll want to practice and get better scores each time. But the limited number of courses, the jarring animation and lack of options give this game a hefty golfing handicap. More content would have really helped this game. I'm prepared to play it some more (to improve my game) but I'm not going to be able to shake the feeling of disappointment that there wasn't more work done here. 'Krazy Ace Miniature Golf' is a passable effort that mini-golf fans will appreciate most, but it sadly wears its flaws a little too obviously. It gets a slightly above "par" score… but it's certainly not a "hole in one".