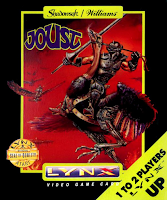 I say, hop onto your flying ostrich, sir knight. 'Tis time to joust! What? You've never heard of 'Joust'?

Way back in the day, there was an interesting little arcade game called 'Joust', where the object was for your knight to ride a big bird and take to the skies, knocking other knights off their steeds. You could only do this by getting the drop on them; ie. having your lance higher up than theirs when you connected. If the lances were the same level, you'd simply bounce off each other. Anyway, if you managed to win a jousting battle, you had to collect the knight eggs before they hatched again, spawning the knight again, which would hop on a new ostrich. If you survived the jumping off platforms and whacking into other knights, you still had to contest with the lava beast lurking under the plateaus, as well as the occasional pterodactyl that was (almost?) unbeatable and trying to ruin your day. Or knight, heh heh.

So the good thing is, 'Joust' was officially converted to the Atari Lynx! Once again, the Lynx is home to another coin op retro classic. We are officially spoiled. So how does the game play after lol this time, and does the Lynx stand up to the challenge of a good handheld conversion?

Let's look firstly at the graphics. Yikes. They are really simple. But that's exactly like the arcade. And, they are certainly clear and colourful. Thankfully, the animation is really smooth too. Even though the sprites are small, they really needed to be in order for the 'Joust' game scene to fit totally on the Lynx screen. In this way, just like Lemmings, the graphical conversion is really faithful, even on the title screen. And I gotta say, the visuals are clear. You'll never miss a flying knight egg, a pterodactyl or a lava monster hand; as small as the graphics are, they are pristinely clear. It's worth noting, though, if spectacular graphics are your game, you're not going to find a lot of joy with 'Joust'. The gameplay here is key. But we'll get to that.

Sound-wise, I like the effects a lot. In fact, they are completely faithful to the arcade. Jousters bounce off each other noisily, the pterodactyl roars, everything is nicely digitised. No music, but that's just like the arcade. I loved flap of the wings and the egg collecting sound as well. Joust is easy on the ears and the sound balance is well done. It's retro enough to satisfy all the purists.

But let's be honest; this game is purely about the experience. And the good news is, 'Joust' handles beautifully on the Lynx. The d-pad is really effective and the jousters handles fantastically. I liked the screech when the knight slams on the brakes. The game doesn't really have an ending; like California Games, 'Joust' is really about advancing as far as you can, and surviving the various "waves" (levels) as well as you can. The pterodactyl you will come to dread. It's a horrible beast that is bent on taking you down, so you'll want to joust all the other knights quickly in order to scare one (or two...or three!) But they can be beaten! Good luck though; it kind of requires pixel-perfect execution. The challenge factor of the game is really about how long you can last and take the barrage that is before you. As you get better, you will go further. And that's when you'll face meaner and meaner knights who don't follow the traditional flight paths the easier opponents.

What about the negatives of this title? I have to say, 'Joust' is a game with particular appeal. The arcade purists will love it. It's really faithful to the original. But I have also seen modern reviewers score this game really low, commenting on how basic it is (for the price). Me? I sit in the middle. It took me a while to appreciate the game and to enjoy the "gameplay aspects" first and foremost. I admire the arcade faithfulness; quite an achievement. But I found myself getting bored after a while, only able to return periodically to better my score (which sadly the Lynx can't internally preserve). It wasn't a long-play for me. But I do return to it.

If I were to redesign this game, I'd only do one thing; I'd put two versions of Joust on here! The current one for the purists, and a modern version of the game for newbies. I reckon a modernised version of the title, choosable at the title screen, would have made the overall game spectacular; maybe a series of missions, different graphics, extra items, cut scenes and speech! It would have been a boon to this game, where surely there was space on the cartridge to fit it. And remember, this is exactly what they did with 'Battlezone' on the Lynx: two versions on there (one secret), same gameplay. Consider the 'Bomberman' series on other platforms, particularly the original game and 'Bomberman '94'; combining purist fun and modern added schemes can be done!

In conclusion, then, 'Joust' delivers what it promises. Solid, arcade gameplay that challenges and keeps you coming back for another play. But it's appeal isn't going to be broad to all players, and I can kind of understand those who criticise the simplicity of the game. These criticisms, while holding some water, don't really understand that the game is actually a very faithful conversion of the original source, so in this sense, 'Joust' actually has a lot to applaud. That's not to say I completely reject the criticisms of it. I wanted a bit more from this game personally, but taking the middle ground, I still think it deserves a good score for how dedicated it is as a version. And it really preserves the perfectly sourced "one more go" quality that the original game has.

So, what are you waiting for? Grab your ostrich and get moving!