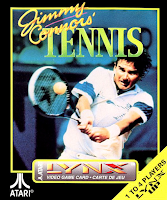 The Lynx has a few notable sports sims: ‘Hockey’, ‘Malibu Bikini Volleyball’, ‘California Games’, amongst others. But it never had a tennis game until ‘Jimmy Connors Tennis’! Thankfully, if you’re a tennis fan, you’re in for a real treat. ‘Jimmy Connors Tennis’ has enough fun, features and few enough “faults” to make it a real winner.

The objective is to play the tournament circuit and finally to beat the master, Jimmy Connors. To do that, you’re going to need all your skill, tennis strokes and controlling ability to make your way there. Thankfully, there is no one way to play this game; you can be a serve volleyer, a groundstroker or an all-round strategist.

The first thing you’ll notice in ‘Jimmy Connors Tennis” is the sweet graphics. Is that a digitised Jimmy Connors? Yes it is! I’m not sure what it is about Hand Made Software, but they pull off some of the greatest graphics the Lynx has ever seen: Power Factor and Dracula anyone? Several intro and setting screens later and you can hit the court. Players look great, animation is smooth and the ball is always visible. Court lines are clear, backgrounds are crisp and the scoreboard is clear.

Sound in ‘Jimmy Connor’s Tennis’ is top of the tier; probably among the best the Lynx has got. When I bought this game, I wasn’t expecting full speech. But everything is digitised; ‘40 love’! ‘Game, Set and Match’! ‘Fifteen All’! Speech is crystal clear. Even better, Jimmy himself has recorded pep talks after each match. The contact sound with the ball never gets dull. There’s little to complain about sound-wise, except that I would have loved a crowd noise after a big winner!

Controls are mostly very good. You’ve got the option of hitting forehands, backhands, volleys, serves...all the usual strokes, and you can aim the ball wherever you want. The main difficulty of the game is always the issue of being in the right PLACE to hit the bell. If you’re too far to the left or right of someone’s stroke when you swing, you’ll miss the ball completely, losing a point. Thankfully, two things prevent this happening more often than it could. Firstly, the game has a fairly forgiving strike radius; sometimes hitting the ball too late or too early still results in a successful stroke. Secondly, a small shimmering square appears on the court whenever your opponent hits the ball. This symbolises where the game thinks you should stand to receive their strike. This is a welcome mechanic, though you can turn it off if you want a bigger challenge. It will certainly take you a while to get used to the controls overall in this game, but you will.

Speaking of turning things on or off, have I mentioned the features in this game? There are almost too many to list. You can play singles or doubles. You can choose your court surface. You can choose gender. ‘Jimmy Connors Tennis’ has loads of options. But it doesn’t feel like it has TOO many options, which can sink some simulations; things are kept simple where it counts. Court views stay the same, and the interface is strong. Each time there’s a change of ends, the game cleverly spins the view around so that you can always see your player clearly; which is so much better than having to control your player from a distance. Good work, Hand Made Software.

With great graphics, sound and controls, a game like this would always rise or fall in terms of the challenge factor. Thankfully, ‘Jimmy Connors Tennis’ is not a breeze. The tournament has a lot of players to beat, they do get harder, and Jimmy himself is like the final boss looming at the end. It’s a cool enticing prospect to beat Jimbo, which spurs you on. Granted, it can sometimes be a little dull knocking off the weaker players before you get there. And that’s probably the biggest gripe with this game, really; unless you like tennis, and you’re pretty patient, you probably won’t enjoy this game a lot. And when you finally beat Jimmy, there’s not much point doing that again unless you want to change some settings. Or try out the doubles tournament with a CPU partner.

I should probably mention one thing about the doubles tournament as a final word. And it’s a problem that I found plagued ‘Malibu Bikini Volleyball’ too. Okay: what is WRONG with the Lynx controlled doubles partners? They can hit a stroke or too, but then they air swing and miss the ball entirely! Thankfully, unlike ‘Malibu Bikini Volleyball’, it’s easy to lurk behind your partner and whack any ball they miss, but this is more annoying than funny (it’s funny the first time though). Thinking about it again though...hmm...if I’m honest, you’ll find yourself doing this kind of thing in real life tennis if you have a particularly inexperienced doubles partner. So it’s probably realistic in some ways; though notably it’s not perhaps common in a world class tournament featuring Jimmy Connors himself!

As an overall score, I’ve tried to factor a number of things into account. This is not a game that will appeal to everyone because, well, it’s tennis; but for tennis fans, it’s really a fantastic game and as high quality as they come. The occasional weakness of the Lynx controlled doubles partners show a weakness, but doubles isn’t the main game here anyway; this is not a big enough issue to warrant a non-purchase. Conclusively, when you take into account all the options, the playability, the challenge, the authenticity and the fun, ‘Jimmy Connors Tennis’ is still one of the best sports sims on the Lynx. There’s just so much to like here, and it’s pretty impressive to see such a nice looking game running on the Lynx and sounding so great.

So, rackets out! Time to show Jimmy a thing or two about tennis! Ready to serve!