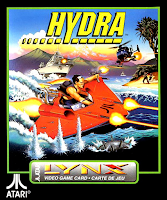 I’m led to believe that a “Hydra” is some kind of mythical savage beast. Sadly you don’t see any in this game, but you may find yourself screaming about hydras or 'Hydra' at some point during play. Hoo boy, ‘Hydra’ is a hard game to complete. But it’s an arcade title, so it’s to be expected! A boat racer kind of in the mold of ‘Stun Runner’, ‘Hydra’ lets you race thin waters and streams to transport fragile goods from A to B. Will you make each dangerous trip, or will you end up face first in the local beach-head, covered in seaweed, with disgusted locals wondering how a man can eat that much sand?

‘Hydra’ has some great looks, but there are a few choppy parts as well. Not that the game looks bad; it doesn’t. It just sometimes looks a little rugged round the edges, lacking a polished a clean edge. But even for that, the visuals are a treat to the eyes, with your stunning watercraft zooming at speed towards the destination with both speed and exhilaration. Animation and scrolling is smooth, obstacles are visible, and weaponry sprays out everywhere. Also, the various bonuses you can collect appear around the ‘track’... even in the sky! Bonus levels look especially nice, with plenty of opportunities to pick up extra rewards in a lush (but dangerous) cash-filled arena. Add the very cool shops and cutscenes and the visual appeal of the game is undeniable.

Sound-wise, ‘Hydra’ does the job well. Though there is no in-game music, the sound is great, and you do get a fairly awesome and sinister intro track on the map screen before each level. This is a help screen where you get a close look at your route, as well as your character, who looks like he is probably the number one criminal on “Australia’s Most Wanted”. He sports a fairly mean mullet, and I’m not talking the fish variety. Interestingly, the bonus levels have some nice music, so I’m not sure why there couldn’t be more tracks in the MAIN action parts. Especially as the arcade game has music in the main section; so why was that missed? Oh well. In the end, the game doesn’t suffer too much for lack of a soundtrack because the action is so intense and in your face: an attribute that also was endearing in games like ‘Battlewheels’. Admittedly, in a game such as this, it’s hard enough to focus on the frenzied in-game action without a blaring soundtrack, in your ears, so this may be one of those rare games where a lack of music may be somewhat beneficial.

More noticeable issues do exist elsewhere, however. Notably, ‘Hydra’ has the most complex problems when it comes to the in-game controls. The craft is just way too easy to blow up because of the collision detection. Foes are more or less stationary most of the time, but you’ll still have trouble avoiding them or even shooting them! Call me mad, but I’m convinced the hit-box is way too small on opponents, and way too large on your own craft. The fact that the ship feels unwieldy at times and difficult to turn just adds to the pain. But thankfully, even with these problems, ‘Hydra’ still manages to be a fun game to play due to its sheer charm and originality.

And part of that charm and originality comes from the fun additions to the simple racing pleasure. You’ve got the afore-mentioned bonus levels after every track, crystals to collect, things to transport, the ability to fly in the sky (with boosts), items to buy at the shop, a choice of difficulty level... just a lot of enjoyable, gamer-friendly options that feel like they compliment the game rather than detract from it. Don’t forget to buy fuel! Oh, and if it wasn’t already obvious, the game is very challenging and tough to finish. You’ll still have to start at the beginning each time you play, but the game is easy to pick up and play anytime, and doesn’t feel like a chore to get to your earlier progress points. Plus, you get to be a character who probably looks more scary than any of the enemies you come across. I’m surprised they don’t run away at the sight of this guy, who looks like he’s seen way too many dark alleyways and probably owns a dog named ‘Deranged Person Eater’. I’m sure he’s not such a fearsome chap once you get to know him; actually, why defend him, he probably is.

Overall, ‘Hydra’ is a pretty unique Lynx experience, which does reward repeated plays and practiced progression through the game. Though the hit detection can be pretty frustrating at times and definitely diminishes enjoyment, it’s not enough of an issue to spoil this fun little on-rails shooter. Fans of ‘Stun Runner’ will definitely feel at home, though that game is superior to Hydra in my view. But good racing games are all about variety and speed, and this game just screams it. Like an actual Hydra. Whatever that thing looks like. Great game!