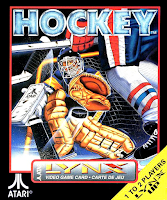 One thing the Lynx does not lack is sports games. But there was never a Lynx game about the exciting sport of ice hockey until ‘Hockey’ was released. Ice hockey is a fascinating sport really, involving a lot of skill in hitting the puck, as well as good balance as you skate around the frozen arena. Well, there’s some good news, Hockey and non-Hockey fans. In this review, you’ll see that ‘Hockey’ is a winner on the Lynx. Sure, it’s not without deficits. But like ‘European Soccer Challenge’, ‘Hockey’ approaches the sport seriously, and it feels just like the real thing. And that’s always a good sign!

‘Hockey’ immediately swats away any idea that earlier Lynx games did not have as good graphics as later titles. This game looks absolutely terrific. From the moment you turn on the Lynx, you’ll be impressed. The title screen looks visually striking, as do the set-up screens, but it’s the in-game action that looks best of all. The players are all perfectly visible, and they move incredibly smoothly. The puck is always easy to see, and so is the score and timer. Really great stuff. Oh, and wait til you see the goal-hitting player’s celebration animation: priceless!

One visual element that ‘Hockey’ shares with ‘European Soccer Challenge’ is the use of graphical, interval close-ups. Most of the action is from a side-on angle. But when there’s a key moment in the game, such as a penalty shootout or even a fight, you get a customised visual (which is blown up much bigger than the regular action). Penalty shootouts are even done holding the Lynx side on, which is innovative. The graphical style of mixing standard visuals with close-ups really suits this game, and never feels jarring.

Sound-wise, there are some quite amusing and excellent touches to enjoy. Speech is missing, which is a shame, but you do get some fantastic national anthems and assorted ‘fanfare’ jingles. It’s a bit like being court-side at the NBA, hearing the ‘dah-dah-dah!’ dramatic music as you try to score the next goal. The sounds hit the spot, being both dramatic and good fun without being a distraction. A key highlight is the sound of the puck being hit against one of the ice rink walls. There is a lot of attention to detail here, and you can see why ‘Hockey’ is a fave of many Lynx players. Both the visuals and the aural nature of the game combine into one fun, action-packed experience that is both easy on the eye as well as the ears.

The controls are good, but switching players with the Option 1 button can be a tad awkward at times. It does work though, and the number of directions the puck can be hit is pretty awesome. The players really move freely and in all directions, so there is certainly a feeling of being able to play your own way. The court is not big, so moving from one side to the other doesn’t take long. And your computer-controlled teammates are surprisingly effective at playing (even the goalie). I was very impressed with the AI work here. As for your own manouveres, the passing, goal shooting and tackling are all easy to execute and feel completely natural; there’s little to complain about when it comes to individual player actions.

‘Hockey’ is at its best when it comes to in-game options. There is a lot to take in here, with the match customisation choices being best of all. There’s a password system, impressive mid/post-game stats to read, and even… wait for it… a ‘Fight’ mini-game to play. Yes. If you couldn’t get enough of the impromptu scraps that occur between players in the game, you can even enter into a player-on-player boxing match (instead of playing the actual main game!).

Fans of the sport will love the longevity factor that comes with ‘Hockey’s various game-modifying settings. Even the difficulty can be adjusted to suit skill levels. And as someone who really doesn’t have a huge knowledge of ice hockey, I was amazed that I didn’t need to read the manual at all to get into this game. It was intuitive to the max. I would suggest that non-Hockey fans as well as big hockey fans will enjoy the game features, if this title is given a chance. And believe me, it’s worth giving the game a good chance!

It’s time for a wrap up... so what’s the conclusion on this game? Really, it’s hard not to heap positive affirmations on ‘Hockey’. Even though I’m not a mad sports fan, there’s so much to enjoy here, and I can see this as becoming one of my favourite games to play on a long weekend when it's raining outside. Don’t be surprised if ‘Hockey’ sits in your Lynx for weeks; you know you’ll always crack an excited grin when you outsmart the goalie to sink that all-important, match-winning goal. And isn’t that, after all, what games are about? Lynx ’Hockey’ lines up, shoots, and scores. Throw on your body armour and get amongst it!