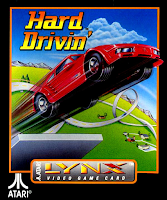 There is no Lynx game that has a more accurate title than ‘Hard Drivin’. Unfortunately, that’s not a good thing here. The main problem here is not that the game itself is very hard; actually, it is. It’s just that the game makes it really, really hard to drive your car. Which is why it’s so hard. And this really sucks once you get behind the wheel. There are a lot of negatives in this game, which makes the game feel a bit like a missed opportunity; but we will make our way through those issues as we go... um... hard drivin’!

This game is actually an arcade coin op conversion that made its way onto a few consoles, one being the Lynx. And the Lynx, as usual, preserves the graphical integrity of the original to quite a good degree. Yes, what ‘Hard Drivin’ DOES have is some fairly cool retro graphics. I really don’t mind these early polygonal sharp edged surroundings in games, like those seen in ‘Steel Talons’. I don’t care what anyone says; games like ‘Starfox’ on the Super Nintendo just ruled graphically! Sure, the visuals in this game don’t look as good as those seen in ‘Stun Runner’ or ‘Blue Lightning’, but there’s something very cool about these stunt environments, where roads can go up and down the hills. The problem with this game is that it just doesn’t let you explore everything! So you are forced to stay on the roads as many intriguing objects and points of interest move by. Phooey.

Sound-wise, there ain’t too much to say. No music. Basic sound. It’s probably one of the lowest achieving Lynx games in that sphere. Which is a shame given what was possible here. I would have loved some nice digital tracks as you drive, to enhance the game. It’s just not here in this case. The engine rev sound is okay though. Other than that, there's not a whole lot more to report than the title theme, which isn't one of the best I've heard. Given that the clock limits you to only being able to race for a certain time limit between checkpoints, a frantic soundtrack would have worked wonders.

Controls, though, are the biggest things to disobey the offical video game race driving laws. Okay, controlling this car is REALLY ungainly. Even though it goes a decent enough speed, this car is not easy to manoeuvre. When you oversteer, you SUPER oversteer. Right off the road. It’s very easy to get frustrated when you just can’t keep your vehicle ON the bitumen. Oh, and when you reach the ‘loop the loop’ part of the track, just TRY keeping your car on it. I almost always smashed the vehicle, but I think I pulled it off once. Did I mention you can’t leave the road? At all? That’s almost the biggest frustration. If you do, your car gives you a few seconds to get on the road again or it automatically crashes you. That’s right. This particular issue is really, really annoying and counterintuitive to fun, free gaming. I can’t even go on the grass?

This all sounds devo, but man, the potential was there for this game! Forget about the arcade translation for a minute and consider this game as a pure stunt title where you could roam everywhere, sandbox style! ‘Hard Drivin’ in my opinion would have worked really well as a time-based, exploratory game, where you were free to explore the surroundings WHEREVER YOU WANTED and do as many stunts as you could before the clock stopped. A bit like 'California Games’. Can you imagine? No restrictions. Think ‘Stunt Race FX’ on the Super Nintendo, but within an arena. It would have worked, I tells ya! It woulda, coulda, shoulda!

Sadly, we got this game instead, though I should say one or two other positives as a kind of concession I think. I did like the replays, where you could watch your car from another angle (albeit crashing into something). And truly, the game is somewhat playable... to an extent. Some expert players have done runs of the game and they've completed it, but not without a crash along the way. And I should say, it's not hard to completely finish the game as an expert considering there is only ONE TRACK! One! So once you've finished it (if you finish it), you will have completed the entirety of the game. And that doesn't make 'Hard Drivin' a long lasting, repeat play kind of game in my book.

Overall, 'Hard Drivin' is one of the poorer Lynx titles, but one whose visual style and concept did give it enormous potential. With more tracks, stunts, better controls, better sound and free reign over direction, this game could have been a real classic little stunt racer for the Lynx. But all of these desirable factors are a LOT to not have present in a game like this. So, as a result, 'Hard Drivin' has far too many negatives to give the game a grade that is other than... well... one that is pretty "hard" to give. Thumbs up for the visuals, but other than that, a missed chance!