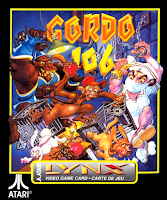 Right about the time of ‘Jimmy Connors Tennis’ and ‘Dracula: The Undead’, the Lynx saw the release of a platform game involving a monkey and various foes, who were strewn across varied levels and environments. No, it wasn’t ‘Toki’! It was ‘Gordo #106’, a scrolling jumper that involved an apple throwing monkey. He was free inside a cruel animal-testing lab, and he needed to rescue his trapped animal friends from their cages across multiple zones and buildings. The ultimate aim? To defeat the cruel N.Human and his minions.

If you’ve ever played a platform game before, you’ll know what to expect from this game. Inserting the game and switching the Lynx on does give you some nice title graphics but no real in-game options, so the game is ready for launch more or less immediately. And that’s fine, because this is the kind of game that is perfect for just picking up and playing for an hour or two in a relaxed arm chair. Whether you stay relaxed or not depends on how hair-pullingly hard you find this game!

What are we dealing with graphics-wise in ‘Gordo #106’? The foregrounds and the backgrounds in this game are very good, and well animated. I have to say, the lab really does look like a lab, with weird tubes of liquid, conveyor belts and work tables. Professors are everywhere (and huge nurses) so look out! And future levels like the fashion shop are littered with clothes presses and smoke, and appropriately dressed villains. The enemies admittedly could definitely be better animated on occasion, but Gordo himself moves well and certainly is “monkey-like”. Especially when he runs!

Sound-wise, the game is also pretty darn good. There’s no speech but the sound effects and the themes included are satisfying enough. There could probably have been some more sound effects, linked to the background objects, but there’s not a lot to complain about here. The sound when an enemy takes an apple to the face is what you’d probably expect it to sound like, though I’m not personally experienced enough in that area to tell you how that would sound audio-wise.

It’s the controls that probably take the most getting used to here. Gordo is sometimes required to make some pretty advanced jumps. If you’re not a fairly adept platforming player, you’re going to find the first few levels almost impossible to beat. You can both walk and run, but when you’re required to run in a short space, it can be very difficult to fiddle with the d-pad to make this happen. Even harder are the occasional lamps or other objects that Gordo can swing on. They are pretty tough to manoeuvre but are often required to use in order to advance through the game. So, you’ll really need to get practicing in order to make some of the trickier jumps, and unfortunately this will involve dying a lot and starting the game over a fair bit. You do have a life bar that can be replenished (with bananas), but enemies do huge damage. Pick up plenty of apples! There are no continues or passwords, so once the lives are gone, it’s back to the beginning, monkey dude!

The gameplay, of course, is the key to a good platformer, as well as how challenging it is regarding progress and replay value. Here is where ‘Gordo 106’ may be a problem for some. This game is hard. Not ‘Batman Returns’ hard (what is?). But it’s tough and unrelenting. You will learn where the foes are each time and thankfully that won’t change, but making high priority leaps is really challenging. It’s very easy to fall to your death. Or even worse, into one of N.Human’s dungeons.

Oh, did I forget that bit? Yes, somehow N.Human Resources (I assume) let the big baddy build dungeons under his buildings. And one of them is a furnace, which means insta-death and fried monkey (literally - Gordo turns into a skeleton). It’s actually almost as bad falling into a dungeon as it is to die. They are really tough to get out of and emerge to top-level safety. It actually takes some enjoyment out of the game, which feels strange when you consider that the game designers were probably doing this to give players a second chance.

Another weird thing is that there doesn’t seem to be much need to rescue the animals if you don’t want to. You can just leave them to rot in their cages if you want, though I assume Gordo will retrospectively release them once he beats the final bad guy. But I haven’t finished the game, so don’t quote me on that; perhaps instead the animals will berate him in person - “GORDO! You ran right past me, you selfish baseball cap wearing goose!” Seriously though, I’m going to suggest that the extra goal of rescuing ALL the animals would have given the game more longevity; maybe as a kind of password “New Game+” option.

Overall, ‘Gordo #106’ is a decent Lynx platformer that could have been better with some more options and a few less issues with controls (which does affect the challenge of the game). It’s a fun, bright and variety-filled little game with a tough core. It’s not my favourite Lynx platformer but we Lynxers are spoiled for choice on that count. Get monkeying about with this game and you might just have a great time.