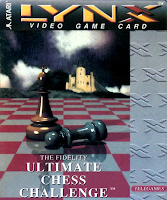 The what? The ‘Fidelity’. Yes indeed, this is a chess game with an impressive kind of backing, involving dedicated chess technology. Nice. If you’ve ever dreamed of being the next Kasparov, then the Lynx has a chess game for you! Not surprisingly, this is the ONLY chess game on the Lynx. So, how does this particular game fair?

I’m glad you asked. There have only been really two other famous chess game series that are well known to players in gaming history (I’d argue). And these are ‘The Chessmaster’ and ‘Battlechess’ (neither are Lynx titles). Chess is a bit of a niche game, admittedly, so it’s a hard sell for those who aren’t interested whatsoever in the ancient game.

Therefore, if you’re going to make a video game about chess, you need to ensure you make a game that has a little something that makes it stand out. Thankfully, by tying itself to an official body, as well as including some great features, ‘The Fidelity: Ultimate Chess Challenge’ kicks some Lynx goals and becomes a nice way to pass the time. Check!

Graphics - well, they are nice, but they are also very simple. There’s not much in the way of textures and there’s no graphical cut scenes of "checks" or "checkmates" (something that would have been nice). One thing that is particularly cool, though, is that you can change perspective from a 2D to a 3D board. Sometimes I found the 3D board a little trickier to see danger on, but this is a really nice feature that brings a bit of variety. The colour of the pieces is clear and smooth. Really, everything is crisp and clear.

Sound-wise, what there is before you is a series of beeps and whirs. It’s pleasant, but not groundbreaking. I really wanted some speech in this one! Like a ‘stalemate’ or ‘nice move!’ (think of what the audio speech did for ‘Jimmy Connors Tennis’ and ‘Rampart’). As it stands, there are varied audio bites for piece placement, checks, and so on. No music though; another thing that could have helped. Atmospheric thinking music would have been amazing. Ooooh, I must say, sound is the area I most wanted more from. But it sadly wasn’t to be.

If the graphics and sound are good (but not brilliant), the great news is that the controls and options are exceptional. ‘The Fidelity: Ultimate Chess Challenge’ is one of the few games where you can play two player without having another Lynx, game and Comlynx cable. Which is very good if you don’t mind swapping a Lynx between yourself and a friend. Great for plane trips. You can also change the difficulty level of the computer opponent, the clock timer, colours, and other settings. It’s great to have so many options in front of you. And the challenge is generally pretty high, especially if you make the computer into a complete chess master; erm…good luck!

When it gets right down to it, there’s nothing really wrong with this chess sim, except that it could have been *brilliant* if there was a bit more to it. Musical ambience! Different era pieces and boards, like outer space! Fighting pieces (a la ‘Battlechess’). Cut scenes. Speech. Am I asking too much? Maybe. But seeing what the Lynx can do, these things were all possible.

Overall, when all is considered, it’s a good grade for ‘The Fidelity: Ultimate Chess Challenge’. It’s chess, pure and simple, with some snappy features and worthy options. It’s not going to appeal to everyone, but then, neither does chess! If you are a chess buff, though, it’s nice to know that this title fulfils that gap in the Lynx library nicely. "Check" it, "mate"!