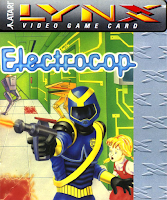 There are some Lynx games that just exude the term “visually impressive”. ‘Stun Runner’...’Warbirds’...’Dracula: The Undead’...these are graphical wonder-games for very different reasons. To me, ‘Electrocop’ falls into that graphical “how did they do that?” category. Unfortunately, the core gameplay doesn’t quite live up to the heightened expectations that the images create.

You are Electrocop, and you have one hour to rescue the President’s daughter in the mechanised, highly technological base where she has been held. One hour? Yes, one hour. This is ‘Prince of Persia’ style stress, folks! There are no extensions when it comes to kidnapper demands in this case. Go in, find her, get out!

The first thing that hits you in ‘Electrocop’ is those graphics. I mean, wow. Whilst they can sometimes appear a little strange in terms of colour palette, what we are looking at is a 3D rendered environment where you can run around wherever you like within the perimeter walls. The incredible scaling means that the various robot enemies (that guard the place) don’t just appear in the distance, but in the foregrounds as well. It's ridiculously awesome to see in practice. I mean, just for example, those foregrounds...they are done incredibly, by portraying enemies that are close to the camera with the appearance of ghostly shapes. This shows you exactly where they are. It’s a neat trick and an amazing visual effect given the era we are talking about here. I don't recall many other portable or home console games even attempting something as wild and experimental as this in the graphical department.

Sound-wise, ‘Electrocop’ is okay. The main theme is alright and suits the frantic nature of the game. The sound effects are effective and appropriate given the beeps and blips you are surrounded with, both robot-wise and technologically. It’s nothing special, but it’s not bad either. The computer the,e can grate a bit, but it's not so bad after a while. Some rave about the tracks in this game, so I may be selling them short somewhat, but to me they were fairly standard fare.

Controlling your Electrocop is a bit of a hit-and-miss affair, though. Running is easy, as is shooting, but jumping takes some getting used to. It involves ducking...hmm. You’ll need to do this tricky move on occasion to avoid the electrified tiles in the ground squares. Many times in the game you will be interacting with a computer or two (we’ll get to that). These menus are easy to scroll through and explore. You will also find a collection of retro games on the computer, which function as light entertainment while you wait for the code-breaker program to do its work (we’ll get to that too).

Gameplay. Ah...now. This is where ‘Electrocop’ has some issues. Firstly, I won’t lie; I found this game hard to commit to. And that’s a problem. The potential was absolutely huge here. Huge. No joke. But it didn't really translate in practice. You are forced to run around these repetitive levels holding down the fire button (thus is the best way to play the game really). You can collect different guns, but if you get hit by too many robots they can get destroyed (frustrating). Even when the levels look a little different, it's still a matter of finding the monotonous computers on each level. This can be really tedious in practice.

Something must be said about the computers at this point. In order to break through the various doors, you need to use the computers to break codes and complete other tasks. The only problem is, you have to wait for the computer to do that. Wait! While the clock ticks down. It’s not only frustrating, it seems counterintuitive to the frantic nature of the game itself. Imagine ‘Prince of Persia’ made you wait five minutes each level you were in, whilst a computer-controlled puzzle clicked around. I mean, if the point is to escape quickly, why put up code-breaking elements that are entirely computer controlled and leave the player waiting? Okay sure, I get that a sci-fi environment will sometimes involve code cracking, but at least involve the player in that. Yes, you can manually enter codes, but you need to know what they are first. This whole mechanic, along with some fairly touchy collision-detection, and I found myself wondering often whether I should play something else.

But even for all that, there’s still a thought-out game here. And you can enter computer codes manually if you have them. It just takes a bit of patience to get used to this game, really. Once it is done and dusted, though, there's not much reason to return to 'Electrocop', but it's doubtful you will get through it on the first, second or even seventh go. I know people who really love and really hate 'Electrocop'. Me, I can't help feel like it's a big missed chance. It's not unplayable, but it certainly does not excite me to play for long periods.

Overall, 'Electrocop' looks like a flashy visual game with some show-stopping effects and game design element, but it just doesn't have the gameplay 'fun factor' to sustain long-term interest. I give it top marks for graphics and the fun little mini-games in it, but I take a lot of marks off for the repetitive nature of play, awkwardness of controls and the frustration of the computer systems. For a 3D fix, you may be better served looking at a number of other Lynx titles (there are many of them in that sphere). I certainly know this game is liked by some, but for myself, I can't quite get past the negatives in order to really reward this game a better score.