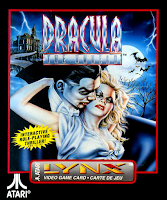 One genre the Lynx never really had was a point-and-click adventure...until 'Dracula: The Undead'. If you've played (on PC) any of the 'Monkey Island' series, 'Day of the Tentacle' or 'Sam and Max Hit the Road', you'll know what to expect from this kind of adventure title. The only difference is, this is a horror title with an actual PG-13 rating! This ain't a game for the kids, no sir. It is actually pretty amazing that, late in the Lynx's heyday, a game like 'Dracula: The Undead' appeared; it was unlike any of the previous games seen on the Lynx, and became a favourite of many players kept awake with its creepy music and ghastly storyline. The Lynx hadn't really done 'scary' before; thankfully, when it did, it did it very well.

The storyline of the game is based on the Bram Stoker book regarding Dracula, and the player controls Jonathan Harker. You are in Dracula's castle due to assisting him with work duties, and though you have cordial contact with him, you must find a way to escape. Much of the castle is closed off to access, and so you must find a way around the environment without drawing the attention of Dracula or his two vampire brides!

This kind of horror game will only succeed if it looks and sounds the part and, boy, did the game designers get those two things correct. Forget bright colours; unlike other Lynx titles, this game is entirely portrayed in sepia. The dour, nightmare-themed surroundings fit so well with the game that you will only admire the audacity of painting the entire game in whites, browns and blacks. Dracula's home is grand, gothic and featured with furniture befitting the era of the book. There are castle walls, huge staircases, and I absolutely won't spoil any of the other graphical touches; they all look superb. Harker's sprite actually scales bigger or smaller, depending on whether he walks toward the screen or away from it; nice touch. Even better, your walking through the game is accompanied by an eerie, threatening soundtrack, which never gets tired. And the sound effects are epic; cocks crow, doors creak, the wind swirls and the screams (should you die) will make you jump out of your seat. One scene in particular features some frantic music that increases the feelings of danger involved. As a whole, it's graphical and aural wonder.

Controlling Jonathan is simple. You walk with the d-pad, but you must select from a series of actions as you interact with objects you come across. For example, when facing a door, you will need to choose the 'open' action. Speaking to another character means selecting the 'talk to' action. Many other actions exist, which will trick and tax the player no end; what if I open this? What if I use this here? Overall, the control scheme is easy to pick up and was a great choice of interface for this kind of game. The only tricky part is that, sometimes, the perspective of the game hides some doorways; they are not always visible unless you walk to a certain point in the room you are in. Thankfully, this doesn't happen very often, so only at particular points are you required to be fairly thorough in your entryway exploration.

The challenge level of this game is very high. There are several reasons for this. Firstly, the puzzles are often NOT easy to solve; they usually involve 'use A object with B object', and they are not always obvious! That said, you never feel like the puzzles are totally unfair or illogical. The second reason the game will last a long while is that...wait for it...there is NO save option or password feature. For an adventure game, that is a somewhat enormous flaw. Given that the Lynx only finally managed a save option feature in homebrew title 'Eye of the Beholder', there could have really only been a password feature at this point of the Lynx's life. And you do wonder whether a multi-integer password system would have recorded certain progression achievements for you, so that you could return back to your latest progress after playing for an hour or two. Instead, you are forced to redo the whole game each time you play it, which means scrolling through the same dialogue, picking up the same objects as last time, and trying to avoid the death you suffered last time. Yes: unlike other point-and-click games, it is very possible to die in this game at multiple points; including early on. So you will soon be learning why and how you died last time, and committing this to memory really quick!

Thankfully, even with the lack of a save or password feature, 'Dracula: The Undead' is thoroughly enjoyable, and replaying portions of the game each time is nowhere near as arduous as it could have been. Not with a game this beautiful. The path forward in the game is fairly linear, so you will follow pretty much the same path each time you play; but once you complete the game (really hard without a guide), there is something extra for those rare players who managed to complete a particular task throughout the game; I'll never tell. Simply put, if adventure games are your favourite genre, you simply can't miss this Lynx title, despite its flaws. It's tough, brain-bending and steeped in old fashion scares; 'stake' your claim to 'Dracula: The Undead' right now!