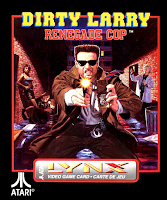 For this review, I will do something that I haven't done in any of my other Lynx game reviews. I'm going to spend the entire time comparing this game to another game among the Atari Lynx's official releases: 'Batman Returns'.

Why? Because 'Dirty Larry' is remarkably similar to 'Batman Returns', having an identically themed "mean streets" vibe and a side-scrolling, weapon-wielding beat 'em up feel. Both the caped crusader and Dirty Larry are interested in solving crime their own way. However, Dirty Larry is more interested in blasting a machine gun at a foe than throwing a batarang. His job is to hunt down Harold Snuff, Mr Big, and any other ruffian that comes his way, and he'll bring whatever firepower he can muster. Unfortunately, bigger firepower doesn't always mean a better game, and hopefully this comparative review will reveal both the positives and negatives of 'Dirty Larry' so you can come to your own conclusions.

Both 'Batman Returns' and 'Dirty Larry' have spectacular graphics. ''Dirty Larry' also has, along with the main action visuals, a number of very smooth and impressive cutscenes that are among the best the Lynx has ever seen. The in-game sprites are big and bright, and animate very well. Backgrounds, also, are lavishly drawn and coloured, often containing their own movement (like the rushing train backdrops).

Larry himself is well animated, but his jump is strangely floaty and nowhere near as smooth (or functional) as Batman's. Oddly enough, you don't need to jump too much, because all the fighting takes place on one eye level, unlike the multi-level action of 'Batman Returns'. Power-ups are easy to see and all the text is very visible. There are many pluses on the visual side, so 'Dirty Larry' and 'Batman Returns' tie equally on this count. Graphics are one of 'Dirty Larrys' biggest drawcards, which you'll notice as soon as you hit the streets, the hotel, the trains and other places I won't reveal.

Where 'Batman Returns' has a snappy, adrenaline pumping backbeat, 'Dirty Larry' has no backing music at all. This is such a shame, because the title theme is absolutely bangin'! The sparseness of this lack of background sound is pretty jarring, given that any simple beat would have added to the overall impression of the game. Gun shoots, punches and item grabs are all so-so, and don't match the variety of 'Batman Returns'; so, nothing to really write home about. Speech would have been a boon, but you won't find it here either.

Now whilst 'Batman Returns' has fairly tight controls, I had real issues with various aspects of 'Dirty Larry'. One, he walks one speed, and it's dangerously close to the front of the action. This makes walking into enemies a very real possibility. Two, his afore-mentioned jump is very drifty and difficult to guide. Thirdly, although you can switch weapons fairly easily, your punch becomes a mash-fest due to the fact that enemies will often keep attacking you despite getting hit. For all these reasons, you often play the game completely on edge, because you don't know what's coming around the corner unless you memorise the positioning of every enemy in the game.

Speaking of memorising every enemy location in the game, that's exactly what you'll need to realistically do in order to beat this game. Here is where, unfortunately, the gameplay falls down. Unlike 'Batman Returns', you can count on 'Dirty Larry' foes always being in the same place at the same time. At this point the game becomes a case of walking forward whilst shooting four bullets into thin air, knowing that if you keep walking, they will hit the enemy that always spawns there. The foes themselves are happy to walk into your firing line, get hit and still keep coming forward.

This makes the game very predictable, as awesome as it looks visually. Mind you, 'Dirty Larry' is not unplayable, hard as the later levels are. It's just extremely formulaic. There are no steps, vehicles, doorways, rooms...it's always walking one straight corridor to the end of the level, blowing away foes which don't have as much diversity as 'Batman Returns'. There are bosses, but they don't tend to be too challenging if you preserve your high powered weaponry. I did appreciate the different weapons, like the machine gun, but the effects of these weapons are nowhere as interesting as those in 'Batman Returns' (love that acid vial).

What about special items? Well, there's health and ammo to collect once you beat certain foes, and you'll soon be in trouble if you neglect to do so. But in the end, with one life (and dying putting you back at the start each time) it could easily end up a chore continuing to attempt the same levels over and over again. At least the challenge is not as deadly as 'Batman Returns', but then, neither is beating PC game 'Doom 2' on "Ultra Violence"... or completing 'Myst'!

'Dirty Larry' doesn't pretend to be anything other than what it is; a walking, punching and blasting side-scroller where you must get from A to B in each level. But that's really all it is. As a game, there is little else to it than walk, shoot, duck, punch, walk again...over and over again. Still, you may well find yourself returning to it every so often to see if you can get further in the game, partly because it looks so good. Like I said, it's a playable game. It's just that there's not a lot to it, which is a shame, as it could have been very nice with some more work.

If you enjoy this kind of title and liked 'Batman Returns', you may well like giving this game a try. But if it wasn't for the amazing graphics and the fact that the game does at least challenge your skill, I would hesitate somewhat to give it much time. Yes, it's got a beginning and an end, with some cool cutscenes in between. Yes, it requires memorisation and weaponry changes to advance further in the game. But there's no real secrets, no extra lives or continues, and no real gameplay variety. Chuck it in the Lynx for the occasional challenge, but 'Dirty Larry' would have benefited greatly with a bit more content. It's passable - just not one of the greats.