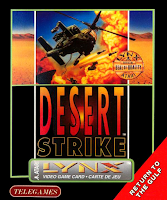 Politically minded though this game was, ‘Desert Strike’ carved a unique niche in gaming history. The isometric viewpoint game was fairly unique, and it’s success spawned another title called ‘Jungle Strike’. The Lynx only received the first game in the series, but what a pleasant surprise it was for the Lynx to have received this late conversion. It really is one of the best games on the Lynx...as well as one of the rarest! Over the four missions in ‘Desert Strike’, you will be required to bomb targets, rescue allies, destroy communication satellites and do much more. Are you ready to roll, soldier?

It’s hard not to compare the Lynx version of this game to other platform conversions. And I must say, the Lynx holds up pretty well. There’s a stunning title sequence, mission information screens, map screens, objective screens...it’s terrific. And the main action screens look brilliant too. Sure, it is not going to have the colour palette of the Sega Megadrive/Genesis conversion, but the ‘copter is smoothly animated, eye-catching, and those rotors whip around! Buildings, dunes and explosions are a treat to the eye, and enemy soldiers or allies (while small) are visible. It’s a sterling graphical effort by the game designers. Yeah, I gotta say, I just love the visual feel of this game.

Sound wise, there’s no music going on in-game. But like ‘Awesome Golf’, this isn’t such a bad thing, because it does give you the chance to concentrate. I mean, what music do you play in the background of a serious war sim anyway? Certainly not the second level ‘Rampage’ theme! Explosions are nice, and the cool sound of your helicopter ladder being lowered never gets tired. The best sound effect is definitely the hypnotising hum of the helicopter rotors - never grating, but smooth and seamless. Some speech would have really helped in this game, but hey, I have found that to be a missed opportunity in many Lynx games (how nice is it to hear speech in games like 'Toki' and 'Jimmy Connor's Tennis'). All up, the audio is appropriate, and though it’s a series of gunfires and bangs, you do feel part of the desert military action. It’s an appropriate aural tone that the game creates overall, even though there are periods where it can seem a little TOO quiet sometimes; but if THAT happens, you can be sure that an ambush is probably not too far away!

Controls (and their advantages) in ‘Desert Strike’ are a matter of opinion, depending on which review you read. The criticism is going to be, mostly, that the helicopter is difficult to move around and slow to rotate. It’s not too fast, some will say, and you’ll sometimes get attacked whilst trying to manoeuvre away from enemy fire. And yes, this will hurt your limited damage gauge. But hey...it’s a helicopter! And this is a game about realism. So a rapidly turning, super speedy craft was never going to be an option in a ‘real life’ military helicopter flight sim like this one. To me, the controls are a credit to the realistic portrayal the game is trying to put across. And just like real life, you’ve got to be careful where you fire those guns (you also have two other kinds of weapons which have differing power). You've always got to be watchful in the midst of the action. If you take out your running soldier allies, well, it’s court martial time for you, cowboy! In other words, your mission will be aborted. You can't afford to make many mistakes in this game, just like a real military mission. The feeling of making a big mistake can be frustrating to a player who is mid-mission.

And this is probably where the biggest criticism of the game lies. If you stuff up near the end of one of those four missions, you can screw up that ENTIRE mission. You can imagine just how much it SUCKS to be right at the end of an hour-long campaign, and one tiny slip-up dooms it. While you aren’t expected to be perfect, you ARE expected to complete each objective to a high degree of achievement. Yes...and these missions ain't short. There’s a limit to a person’s patience when you are trying to complete a really lengthy mission for a third or fourth time before you throw up your hands up and slide the cart out of the Lynx. I mean, you could always use a guide, but there’s not a lot of fun in that; and with only four missions, you don’t want the game over too quickly.

Thankfully, there's little chance this game will be over quickly, and the variety will keep you coming back for more; even when the game gets frustrating. There's really a lot packed in this game. Your stats are recorded and relayed to you after each mission! You can choose your co-pilot, who each have different skills! Hidden items abound, including fuel and ammo (both essential) and the secretive, uber-useful 'super-winch' (which makes picking up items a breeze)! And the objectives each have different look and feel when you complete them (my favourite is dropping off former prisoners into safehouses). Make no mistake, this game is hard. But it kind of needed to be, in order to show a realistic portrayal of a battle campaign. And the last thing anyone wants is a pushover. You'll need to learn the location of supplies, and practice your strategies, in order to succeed (there's more than one way to beat the objectives). The balance between "covert" missions and "overpower" missions is just right, in my opinion.

I had a ball with 'Desert Strike'. Sure it's challenging and can occasionally be frustrating. But the realism you see in the game is rarer than hen's teeth on a console, and there aren't many other Lynx games that share the realistic edge this game has (except for maybe titles like 'Warbirds'). It's pretty striking that this game was ported so well (can we have a homebrew version of 'Cannon Fodder' too please?). I would certainly put 'Desert Strike' in the same gaming class as other Lynx stalwarts like 'Lemmings', 'Chip's Challenge' and 'Stun Runner'. I can't recommend it highly enough, even if you aren't a war strategist gamer. It's a really well done conversion that rewards exploration, practice, ingenuity and strategy. And you can't ask for more than that. For a challenging and rewarding flight title, pick up a copy of 'Desert Strike' today!