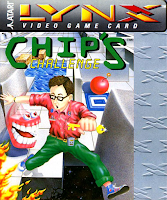 If you asked a group of Lynx enthusiasts what one of the most defining, classic and well-known Lynx games was, then one of them would undoubtedly say ‘Chip’s Challenge’. A pack-in game with the Lynx 1, ‘Chip’s Challenge’ became one of those rare Lynx title that went on to further success across other systems, including on Microsoft PC’s and even a Chuck Sommerville-directed sequel on Steam! It’s arguably one of Epyx’s greatest gaming achievements, among many of the awesome games they’ve made. So this review hope to be a window into why!

A top-down puzzler, you take control of Chip, who wants to enter a computer club in which the girl of his dreams is involved. She sets him the task of completing over 140 levels of dangerous, computer-chip-hunting action. Man, I hope she’s worth it! Ahem. Anyway, you must collect all the computer chips scattered on each level and avoid the various traps, foes and hazards that you come across. It sounds easy enough, but don’t be fooled; if there’s one thing that you can be sure of on the Lynx, the puzzle games are rarely a pushover! Especially in this case: get ready for a puzzling brain-bender!

Graphically, prepare to be not so impressed; ‘Chip’s Challenge’ is not a game about spectacular, show-stopping graphics, but one about functionality. The good news is, what IS there is clean, colourful and well animated. You will immediately recognise the various dangers, whether they be firebrands or moving objects that can roll over Chip. Your sprite is wonderfully nerdy, and looks a bit like the guy that ended up in ‘Gauntlet’ for the Lynx. Whether it’s the same dude is debatable I guess. In any case, Chip walks around easily and the various computer chips you need to locate are simple to see. You’ll also see nicely drawn keys, doors and other objects around the place. The background tiled terrain never really changes a huge deal, but you’ll be having too much fun solving the puzzles to really notice.

Sound-wise, this game has fun and bright music, which really adds to the joy of the puzzling you face. It’s a good example of what the Lynx can do music-wise. Aural effects are also great, and I noticed that the sound effect of picking up a computer chip is the same sound as what is heard in ‘Viking Child’ when you grab a coin. In fact I’ve heard that sound effect in lots of Lynx games. No matter. All effects are well done, especially the sound where Chip accidentally walks into a fire: “PSSSH!” The game cheerfully writes ‘OOPS’ when you do this, just to underline that this game is an experience about humour as it is about tricky puzzles. You almost feel as if the game is as amused about your mistakes as you are.

Controls are simple and effective. You just need to really walk around, and the game does a lot of the work for you. If you pick up a magnet special power, you’ll soon find out that this will help you with particular things. Similarly, other special items will give you a power of some kind (if you haven’t noticed I won’t reveal the special object powers as it’s much more fun to find out these yourself). The various keys work instantly on doors, and there are plenty of other surprises in store. Sometimes you’ll walk on ice and find yourself unable to control your character as he slips around the place! You can also push items on water to make bridges. There’s a lot of fun to be had overall, and it really needs to be a gaming experience played to be believed. ‘Lemmings’ fans in particular could well adore this game.

It’s hard for me not to compare ‘Chip’s Challenge’ to another well-known Lynx top-down puzzler, ‘Crystal Mines 2’. Both involve controlling a character around a maze, finding treasure and solving objectives to find the exit. But I think ‘Chip’s Challenge’ slightly has the edge play-wise, when you pit these games head-to-head. The whole experience is just so simple in its objective, but incredibly complex in execution; the puzzles you must solve get progressively more difficult until you may find yourself throwing up your hands and wondering what you must do. But this is the beauty of the game; it knows just how far to keep challenging you and to keep you coming back. And there’s so much to it that you’ll be unlikely to complete it in any kind of hurry. That’s also considering there’s an excellent and useful password system for every level. Plus, if you didn’t already know, there’s a freaking Mandelbrot generator hidden in this game too. Talk about hidden Easter eggs!

Overall, ‘Chip’s Challenge’ is a defining Lynx puzzler that really got the system on the map early on, and deservedly so. Sure it looks simple on the screen and it mightn’t appeal to gamers not into puzzlers. But I would advise those gamers to also give this title a go. It’s fun, hilarious, taxing, unique and clean in presentation. If you don’t own ‘Chip’s Challenge’, rest assured it’s well worth the purchase. Go collect those chips!