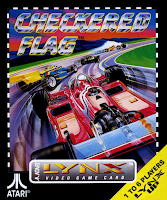 If you were purposed with creating an excellent Grand Prix racing game on the Lynx, what would you include? Picture it: you’ve got full creative control. Me, I’d want a variety of racing modes. I’d want great graphics and sound. Multiple courses. Opponents to race against. And a few other options to round it off. Well, the good news is that ‘Checkered Flag’ has all of these things and more, pulling off the traditional racing caper very effectively. Here’s why.

Firstly, you are not left in any doubt over the visual quality of this title. From the opening credits to the post-race cutscenes, there’s a visual feast for you. And that’s before you get to the actual racing. When you hit the track, the action is super smooth in terms of scaling. Other cars are always easy to see, and the scenery rushes past you at a quickening rate as you accelerate. The tracks change too, from the lush trees in the hot weather to the cold, snowy backgrounds on cooler races. There’s really not much they could have done to improve these graphics. Maybe a bit of smoke or fog on the track, something like that. It’s all I can really think of though: overall it’s well done.

Soundwise, the car has an impressive hum as you race, and all the expected effects you would find in a Grand Prix setting are pretty good. It would have been even better to hear some more digitised effects here (A la ‘Klax’ or ‘Power Factor’) but you can’t have everything. As with other Lynx titles that are racers, you won’t be too caught up in the audio due to the on-screen competition going on, but what is there is pleasant. I especially liked the musical title theme, which accompanied the very smooth animation of a Grand Prix vehicle racing around a track. This kind of ‘high qual’ visual and musical double act always create great Lynx introductory scenes (particularly when you see how awesome it was set up in the ‘Rampart’ and ‘Dirty Larry’ Lynx titles - which are kind of the benchmark titles when it comes to intro sequences). Anyway, ‘Checkered Flag’ does that tradition proud. Always a good thing.

Control-wise, your vehicle really does handle well, and the calibration of the Lynx controls is simple and painless for both beginner and seasoned Lynx players. Turns and chicanes are always fun, and having a small scale map to follow at the top of the screen is a huge asset. I can’t imagine predicting some of these turns without it, as even with this map, staying on the road is a fun challenge. At least it appears to be better than the Jaguar edition of ‘Checkered Flag’ in this regard; whilst not having played the Jag game myself, I am aware that nearly every review states that the control issues make it almost unplayable without hitting hazards. Here, on the Lynx, you don’t get that feeling. But if there’s one criticism of the controls, it’s that opposing vehicles seem to get off extremely easily in collisions. It’s hard to avoid them sometimes, and when you do hit them, it can create havoc for your race placing and progress. It’s frustrating sometimes, but not so taxing that you won’t try to keep improving your steering skills. And the spoils of victory in winning the cup are enough to drive you to keep up the commitment until you score the golden goblet!

Play-wise, if must be said that ‘Checkered Flag’ is a real treat overall. It's a Grand Prix game, pure and simple. There's no speed boosts, ramps, or machine gun to help you win the race. It's just like the real thing. In this way, your skill in accelerating and reducing speed will be the real test in whether you win or not, and it's fun to have a game that has no gimmicks. You are either the most skilled at driving the track, or you aren't yet. Practice, and you will be. It's as simple as that. Challenge-wise, the game is set at just the right level to introduce you in it, and then to really test your skills. And that's certainly the sign of a good racing game.

'Checkered Flag' is the purest form of racing game you can find on the Lynx, and even with all the other driving games that became available after it was released, it still remains the litmus test by which all good Lynx racing games are measured. It's kind of surprising that there no real attempts to try and better this game with an alternative, brand new Grand Prix Lynx title. Or, maybe it isn't such a surprise. Because when you have a game that really captures the feel of Grand Prix racing to the extent that this one does, you'll wonder whether you'll be able to make a game to better it. To date, no one has. 'Checkered Flag' is still number 1.