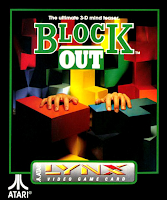 Stack the blocks... make a line... BZZT! The line disappears. Now start the process again! Sound familiar? Yes, many years ago, The block-stacking puzzle game ‘Tetris’ took the world by storm, and found itself on almost every console except the Atari Lynx. Well, we did get ‘T-Tris’ as a homebrew title eventually. But before that game came out, another game called ‘Blockout’ was released. Essentially, ‘Blockout’ kind of “became” the Lynx version of ‘Tetris’ in some ways. It played in exactly the same way, but with one twist: all the action was represented on a top-down, three dimensional board. This decision creates a lot of cool moments; but unfortunately, in the overall analysis of the game, it also brings it's own share of problems!

In reviewing ‘Blockout’, it’s good to start first with some big positives. First of all, in good news, you truly get to play this game YOUR way. The visually simple intro screens actually contain some pretty amazing customisations, in an all-too-rare scenario for Lynx games. You can choose your skill level, the kinds of blocks that you use, and even the “length, width and height’ of the playing arena. Because the blocks are falling downward, the preparation of a deeper playing area is to give players a longer game time (and a simpler challenge). You can make it hard or easy on yourself, basically. There are other options too, and the game allows you to either play along with labelled presets or create your own entirely unique game. It’s all very useful and intuitive - nice work, ‘Blockout’!

Now… here's a quandary. The graphics in this title are both mildly disappointing as well as very impressive! How is that possible? Well, the playing area is kind of drab in appearance; it's definitely not as animated or exciting as it could be. But on the other hand, the “wire frame” appearance of the blocks (that you twist and turn before dropping them) look completely awesome! If you’ve played ‘Battlezone 2000’ on Lynx, you’ll likely agree that the wire frame graphics look great there; well, ditto for this game. The see-through nature of blocks is essential, as it helps you to see the playing area beneath them. However, blocks do change to full colour as they are placed (and they vary in shade depending on how high or low they are on the board). The end result is a nice environment to look at, if a little unadorned. As for actually PLACING the blocks on the board, well, we will get to that.

Sound-wise, there’s very little to talk about, really. There are occasional sound effects, which don’t occur very often and have little consequence in the game. Occasionally you’ll hear a buzz or a beep (like when you clear a line of blocks) but most of the time it is eerily quiet. One of the attractions of ‘Columns’, a different 'Tetris’-style game on other consoles, was immersive music and ambient sound effects; sadly, none of that kind of attention is paid here. And though the sound area feels like a missed chance in some ways, the lack of audio does at least cause you to concentrate, which you will need to do A LOT. Blocks fall constantly and need placing quickly most of the time; there’s really no sleeping in ‘Blockout’, as you would expect from this kind of game!

Which leads to the obvious question of “how does the game control?” I have to answer that in a few ways. Firstly, moving blocks around and rotating them the way you want them is relatively easy. And, the buttons themselves are responsive, so you won’t miss a beat when you carry out an action. But one troublesome factor worth mentioning is that the game perspective can sometimes make it REALLY HARD to place blocks where you actually intend for them to go. If this sounds unusual, watch footage of the game in action; do you see the issue? There’s no block-shaped silhouette on the board to guide your block placement. As a result, a lot of players are going to put blocks in places they never intended to, just like I did. I don't need to tell you that this kind of thing can ruin a match that has been concentrated on for several minutes, which will lead to frustration and ending the game itself (for some players that may evem mean ending the game for good).

And yet... despite the perspective issues, ‘Blockout’ does become a better experience once you’ve played it for a little while. Even though I STILL found myself having accidental block placement issues, the issue didn’t ruin the relaxed enjoyment this game gave me. I still liked advancing further in it. I still liked the customisation. And I still never tired of the nice visual look of the game - particularly the block animations. There’s no doubt this game would have been greatly improved with light sources telling you where blocks will fall, as well as the inclusion of ambient music and effects. Without those things, ‘Blockout’ can feel a bit archaic and less than inspiring, given what we know the Lynx is capable of. But the game is not a total loss by any means; in fact, far from it.

Overall, the positives of ‘Blockout’ outweigh the negatives, and the game is fun to chuck in for a quick play now and then. I applaud ‘Blockout’ for putting a different spin on the “block-matching” concept. Like ‘Equinox’ on the Super Nintendo, this is a nice game with a unique perspective that occasionally will trick your eyes and cause frustration. But this doesn’t make it unplayable, and with enough practice, it’s possible that you will limit your errors. If you’re a fan of ‘Tetris’, it’s worth giving this game a go and seeing what you think. For everyone else, take a preview as well; see if you can live with the visuals. You might well find yourself having a good time with this puzzler. Go on: check it out and see!