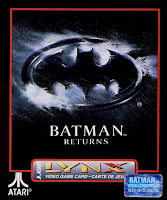 Do you like your games hard? I mean, REALLY hard? Well, ‘Batman Returns’ is for you. I’m just going to say this right from the off: if you like easy games, run for the hills! This game is possibly THE hardest title on the Lynx. You have been warned!

Now, with that announcement out of the way, let’s talk a little bit more about this game. ‘Batman Returns’ is the official Lynx release of the movie of the same name. It is unique to the system, contains the same story elements, and puts you in charge of the hero of the franchise, Batman. All the villains are here - Catwoman, The Penguin, and the assorted goons. As a scrolling platformer, ‘Batman Returns’ attempts to marry the dark and edgy appearance of the movie with solid gameplay. But does it succeed?

Graphically, Batman is a marvel (to use another comic book reference). Once you turn your Lynx on, you’ll be faced with an epic Batman logo. Then you are thrust straight into the action. And what action! ‘Batman Returns’ visuals are superb, based clearly on a comic art style whilst still maintaining the grit and darkness of the movie release. Animation of Batman and his foes is smooth, and power-up icons and enemies are always vibrant enough to stand out from the background. One button jumps and the other throws a punch, but you can also select from some special weapons (batarangs and acid vials). These can be collected in the form of coloured symbols, but they are rare and need to be used sparingly. Like, you need them for the epic boss fights, which aren’t easy AT ALL. No spoilers here; they’re awesome but as hard as the game itself.

Soundwise, the only real criticism is the lack of variety. It’s basically a cacophony of explosions, punches, thumps and guns crackling, though there is a cool background track which never gets tiring. It’s unfortunate each level doesn’t have its own musical theme, but again, the regular music is catchy and you’ll probably find yourself humming it as you jump over another bomb. I did like some of the more individual effects; the shotgun blasts, machine guns and pistols all have distinctive sounds; nice touch! Not that you’ll want your character to hang around long enough to appreciate them.

And to control Batman is a dream. You really do feel like you ARE the caped crusader when you leap over buildings, somersault, brawl and toss weaponry around. There is no issue with the collision detection whatsoever; when you die, it’s because you took a bullet too many. And though Batman’s life bar is long, you’ll need all your d-pad skills to keep him safe. It is virtually impossible to control Batman in such a way that he doesn’t become seriously harmed in the course of a level; thankfully, the occasional health power-up counteracts the massive damage he regularly sustains.

Okay, so if there’s so much right about this game, what could possibly be improved? One disadvantage is that Batman runs on rails a bit; by that I mean there’s no upward scrolling whatsoever. It’s all forward movement, which decreases the variety that could have existed. But the main issue here is the difficulty.

The difficulty indeed. This game is absolutely cruel to play challenge-wise. Enemies are manifold; they come from everywhere. They do huge damage, they follow you, and if you try to stay on an enemy-free screen for a few seconds to recover, the game creates more to send at you! Yes, they are continually generated. You will find yourself simply running most of the time, and jumping, because you literally cannot fight a never-ending horde. Worse, Batman has ONE LIFE! One. So if a corrupt shotgun cop blasts you while you are jumping between buildings, you fall straight down GAME OVER! Back to the start of the game, first level, if you don’t mind. As good as this game is to play, there does come a point where it totally tries your patience having to start from scratch EVERY game. And when the enemy locations are completely random, you can never predict where or how death could occur. Even with four stages, I have only ever got to level three a handful of times before dying. And I would see myself as a better platform game player than most.

But putting that aside...if you can look past the outrageous difficulty, and you consider this game like the ‘Dark Souls’ of the Atari Lynx, you are in for a real treat. This is a totally genuine arcade-style platformer. It would fit perfectly in the arcades next to Pac-Man and Double Dragon. I hesitate to call it a beat ‘em up, though it certainly has those elements; it’s more a test of how precise are your attacking and movement skills within a platform game. And you won’t be getting anywhere in this game unless you really practice. Thankfully, with the quality of the action ahead and the coolness of the film tie in, you’ll want to keep trying again and again. Despite the toughness, ‘Batman Returns’ has the action and the spectacles to entice you back to try just one more time. Your move, Mr Wayne...