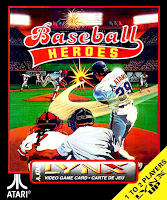 In ye olden days, I remember when ‘Baseball Heroes’ was first announced as a coming Lynx title. The one thing that stood out at the time were those exciting preview graphics; it looked like a pretty good representation of the real game of baseball, which of course, is mostly known as an American sporting pastime. Fast forward to 2018, it was pretty exciting to finally snag a copy of this game for myself! I found it to be surprisingly less expensive than many other Lynx titles (for reasons unknown). I had waited long enough to play it; so without further ado, I decided to throw the pitch on ‘Baseball Heroes’ and hope that it was a home run!

‘Baseball Heroes’ is about... true, unadulterated baseball. Pure and simple. This is designed to be a real-life baseball experience, without the gimmicks or any modified rules. Although there are no actual professional American teams here, this game FEELS uber professional, and it takes itself seriously. So much so, that it’s a game that allows you not just championship-style matches, but also to experience several mini-game practice events with a ball machine! Want to hone your pitching and catching? ‘Baseball Heroes’ has that area sorted for you! As for the main game, there are four different teams to choose from, and you can order your players in a way that you see fit; just like a real coach. Then, once you’ve done all that switching, it’s time to take to the field to beat the best in the world... yes, to rapturous Lynx audio applause!

The in-game visuals of ‘Baseball Heroes’ are clearly one of the standout factors in this game. The colours in this title are vibrant, from the opening and option screens to the in-match action. Players are nicely drawn, well-detailed and also beautifully animated. As for the field, everything and everyone is visible, and the ball is never hard to see (it sort of “self-zooms” to a larger size when it lands on the field). Pitching, hitting, running and catching are all lovingly represented, and you feel like you are in the midst of playing the real game. Like ‘Awesome Golf’, this game does a good job of representing the sport in a pictorial sense, and you could argue that ‘Baseball Heroes’ is among the best graphical sports games the Lynx has ever seen.

Sound-wise, there is also some very good news. ‘Baseball Heroes’ has excellent audio speech! It’s absolutely fantastic to hear the umpire call out exactly what’s going on. The commentating is not at the level of Lynx demo 'Relief Pitcher', which is an unfinished but extremely impressive Lynx title (go look at THAT YouTube footage!). But, 'Baseball Heroes' will regale you with shouts like "OUT!" and "HOME RUN!" as you bat, and it's endlessly enjoyable to hear the barrage of baseball terms thrown your way. Other highlights include the crowd ambience and shouts, as well as bugle-like fanfare at key moments of the game. All I needed was "The Star Spangled Banner" playing and this baseball game would have had the motherlode!

The controls are where, admittedly, the game faces some hurdles. When you bat, the swing is inexplicably slow, and there's almost no way of knowing when you should go for a hit. There's no 'Jimmy Connor's Tennis' wide hit box, or 'Awesome Golf' visual strike meter. As a result, you find yourself missing large amounts of balls, and this can only be improved through practice in the nets of the mini-game ball machine. Even after that batting practice, I haven’t much improved, so my experience of fun took a hit as a result. Opponent-hit balls are also pretty tricky to catch, making fielding a tough gig, and I found myself struggling to get "out" the opposing side (though I did on occasion). The one controlling highlight I found was pitching. Though not as fun as batting itself, you do get to use hand signals, pitch at different speeds, and generally cause batting opponent mayhem. It's nicely done. Which begs the question... if this level of care was taken with pitching, why couldn’t the interface for hitting have had the same level of care? It's very hard to get to home base unless you hit the rare home run, as the CPU seems way too strong and almost always caught the ball when I was batting. If it wasn't for the visuals and the audio, it would have been much tougher to persevere in this game with the hope of getting further.

That being said, the quality of this title is such that I'm willing to keep practicing until I get further advanced in the action. I know others have managed to conquer it, so there must be a level of dedication needed in order to truly become a competitor. Thankfully, there's so much to like about the game that the ride seems worth it. The attention to detail in allowing players to practice their skills is actually really neat; how often do we see that? In fact, you could argue that these practice games are almost like their OWN Lynx games, with the "Home Run" mini-game being especially enjoyable. If ‘Baseball Heroes’ had a better ball-hitting interface for batting, and adjustable difficulty settings for all players, I would have easily rated this game in the 8’s or even 9’s. As it stands, the game will only truly reward the persevering player. If baseball is your thing, you’ll put in the work and likely reap the benefits.

‘Baseball Heroes’ is an, overall, pretty good title for the Lynx. It could have been better. Some features and nuances are absolutely outstanding, but other issues let the game down in the final appraisal. Still, if you’re willing to stick at it, you may find you love the challenge of the game, and that your practiced gaming wins the cup. If that happens, make sure you put that footage online and show the world, because it’s a worthy achievement! In the end, I’d have to say that the various positive aspects of this game do make ‘Baseball Heroes’ worth the ride, particularly if you are a fan of the sporting caper. Batter up!