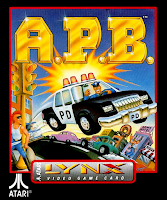 ‘APB’ is an arcade classic, a police-themed software title designed to gobble the hard-earned coins of gaming-hungry audiences. Well, no coin gobbling is happening THIS time, son! If you’ve managed to snag the Atari Lynx version of the game, it’s free-to-play all the way. It’s time to take on the role of Officer Bob and chow down some donuts... oh... and while we’re at it, I guess we should try and arrest some crooks too.

The purpose of ‘APB’ is to use your police car to complete a fairly lengthy series of levels, and most of all, to achieve the set ‘goal(s)’. This may be (for example) arresting a criminal, dealing with litterbugs, or rescuing citizens who are stranded. Thankfully, the time you take to do these things can be increased by downing a donut (found in various places around a level) and refuelling your police car. Also, you can if you achieve a ‘higher than necessary’ quota, you can accrue bonus points. Completing a level attracts your crusty Police Chief’s respect and one of his raspy rambles (he really is incomprehensible - just like we gamers would hope him to be!). There's a real 'Police Academy' movie feel to this game!

The graphics are nice in 'APB', but they are fairly straightforward and simple. This game features a top-down perspective, much like the old home console game ‘Micro Machines’ (or even the Lynx’s own ‘Championship Rally’). This means you can see the tops of buildings or other vehicles. Still, everything is distinguishable and largely well done, particularly the donut diners and the police station itself. Better yet are the hilarious cutscenes of your boss blasting you for racking up demerits, or congratulating you for a job well done. The “game over” screen also is very funny, but I’ll let you discover that nice little visual sequence for yourself.

The best thing about APB is undoubtedly the excellent sound effects and music. The sheer amount of speech in this game is seriously impressive. Almost everyone in the game has something to say to you, from the distressed woman’s call of “Help!” to the indecipherable “Hmhrrgh” of your Police Chief. Your radio crackles with new information, and Bob himself shouts “Yeaahhh!” once he gets to his destination. The voices aren’t as clear as ‘Rampart’ or ‘Jimmy Connors’ Tennis’ but they are vibrant and appropriate to the game’s style. The in-game music and title theme are also terrific, getting you pumped and ready for the morning arrests and legal violations.

The controls are, admittedly, the game’s biggest detriment. They aren’t too bad, but they could have been a lot better. In terms of the ‘A’ and ‘B’ buttons, the issue is that car acceleration is one button, and your sirens are the other button. If you don’t hold down your siren button while you confront a vehicle, you’ll crash into it and get demerits. But the action moves so fast that it makes sense to not let go of the siren button at all; hence, I found myself holding down BOTH 'A' and 'B' buttons simultaneously while driving, steering with the d-pad. Thumb cramps! This game would have done better to have a ‘tap the siren button’ arrangement (press the button once to turn it ‘on’ or ‘off’) or even an auto siren. Customisable controls help!

The learning curve is also STEEP in 'APB'. The first stage simply involves arresting some traffic cones (dangerous!) and this really does a great job of settling players into the controls and gaming style. But then it’s STRAIGHT into rescues and ‘littering offence crooks’ amongst hardcore streets and buildings, where one missed turn can mean death (well, demerits)! I found it frustrating that not completing a level meant going back to the beginning of the game AGAIN. There are no passwords or continues here. If you get fried (literally!) by your boss’ rage, then it’s the first level traffic cones for you, Officer Bob! Having more lives would have helped players to plot out level maps and obstacles a bit more, which can on occasion be fairly extensive. Perhaps even a practice mode.

Still, it must be said that 'APB' gets the overall arcade experience supremely correct. It's undeniable. As a tough and unrelenting game, it matches the severe difficulty curve of a coin-op environment, whilst still retaining the entertainment value (and the incredible audio) of the original. Fans of 'APB' will likely appreciate this Lynx translation, and newbies will be impressed at how the Lynx once again pulls off an arcade adaptation. But there’s no doubt the unusual premise of the game, as well as the wince-worthy difficulty, will put a few people off. A bit more hand-holding (such as found in 'Chips Challenge') especially in earlier levels would have reaped significant benefits here.

All being said, ‘APB’ is a good arcade experience that is certainly unique and not without entertainment value. Though the controls aren’t perfect, and the graphics are often less than exciting, this is a solid little game that promises rewards for those who invest the time to learn each city suburb and its secrets, of which there are many. Personally, I can see myself trying to progress in ‘APB’ every so often, gradually learning the level nuances and trying to achieve my quota. It's a decent title, and I'm sure APB will be a favourite among many Lynx players, especially when enjoyed over a hot cinnamon donut.