Great Lynx games are made by some great companies. You may have heard of ‘Epyx’. Maybe you’ve heard of the group ‘Shadowsoft’. But what about a game making company named ‘Hand Made Software’?

Hand Made Software certainly made a splash when it came to Lynx titles. They were a game company that seemed to excel in not just creating great sports titles, but also branching out impressively into other categories, such as platforming, driving, puzzling and even adventure gaming. In this brief look over Hand Made Software, we consider their game releases and what made them truly special. 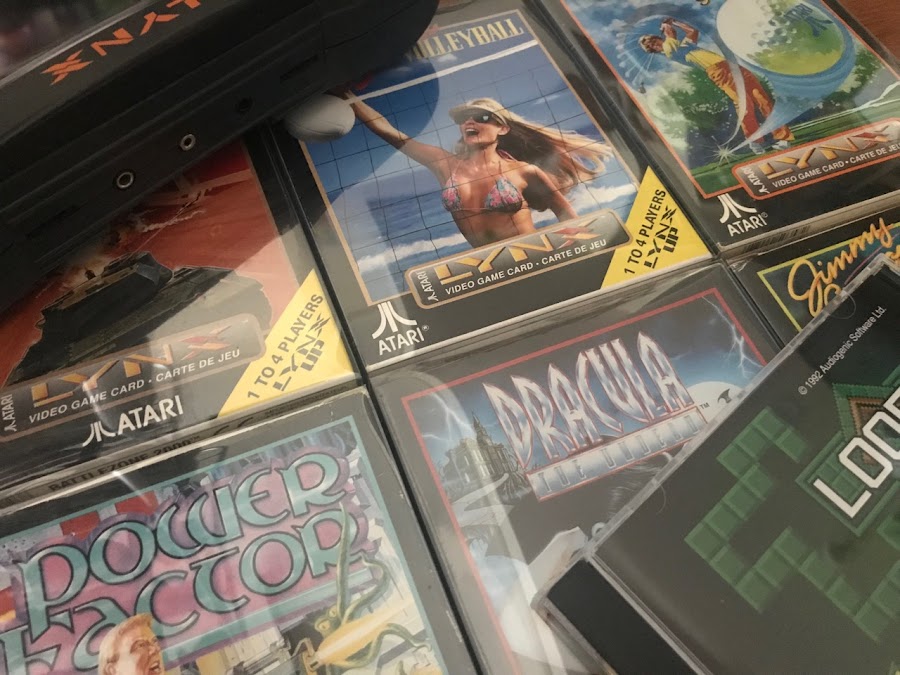 These dudes can do graphics!

You always know when you play a Hand Made Software game when you see the graphics. It’s almost a signifier of their brand. I mean... wow.

‘Power Factor’, for one, has some of the most intricate and mindblowing Lynx graphics out there. This thing just screams ‘PC-based’ platforner, and yet it’s right here on your Lynx. Every inch of this title shows graphical quality, from the sprites to the backgrounds. In fact, the occasional slow-down just goes to show how much is going down “on-screen”.

Then you look at ‘Dracula: The Undead’, and you wonder whether this title looks even better. Different genre, different art style; but it’s the same quality. ‘Dracula: The Undead’ makes amazing use of zooming in and out of the player sprite, which shows the depth of the playing area. The textures and gradient work, also, is pretty spectacular.

The sports titles, too, are visually appealing, with several of those titles even sporting digitised graphics. The volleyball player (‘Malibu Bikini Volleyball’) and Jimmy Connors himself (‘Jimmy Connors' Tennis’) look as impressive as ANY digitised sprites on the Lynx. They might even be the best.

Need I even mention ‘Battlezone 2000’ and the incredible wire-frame visuals found there, or the fully featured settings of ‘Awesome Golf’? These titles are both rich in graphics, and are found to be favourites of many Lynx gamers.

Handmade Software excelled in their presentation of speech and sound. In fact, some of the clearest speech on the Lynx is found in their games.

‘Awesome Golf’ has some brilliant (cutesy) commentary from a golf-loving squirrel (yes, really!) Jimmy Connors chats to you (and coaches you!) in ‘Jimmy Connor’s Tennis’, whilst the umpire clearly announces the score. There are some great speech moments that truly enhance these games.

But the general sound and music areas are also, for each of these games, both original and appropriate to the mood of the games. ‘Battlezone 2000’ in particular will make you think you are playing on a much older retro console... a great surprise! ‘Dracula: The Undead’ takes creepy music and sound to the next level. And ‘Power Factor’ has some terrific explosions and digital effects that you certainly won’t find elsewhere on the Lynx.

One thing that Hand Made Software seemed to enjoy doing was customising difficulty levels. This is true for many of their games. ‘Power Factor’ has three choices of difficulty. ‘Awesome Golf’ allows you to choose different courses from around the world, which all had different levels of challenge. All of this, of course, enhances the replay value of the games, and means that both the experienced and the inexperienced can enjoy the games.

When games are sports titles, adjustable difficulty is especially important. Other game companies have done this badly! But note the other little touches that add an even more nuanced facet to difficulty and challenge in two particular games. Hand Made Software allows you to choose whether (or not) to have a “guiding square” to show you where the ball will land on both ‘Jimmy Connor’s Tennis’ and ‘Malibu Bikini Volleyball’. It’s a welcome addition in games that have constantly changing ball locations, and is designed for absolute pros at the game.

Yes, you read right - Hand Made Software released some epic offical Lynx releases, but there is one particular game that didn’t make the offical release list. Thankfully, this game is available to purchase thanks to publisher Songbird Productions, after being in non-released orbit for a little while.

‘Loopz’ is a puzzle game that is also available on multiple other consoles. It features multiple modes of play and involves the objective of linking pipes together, in order to score points and clear the board. The music and sound is particularly strong in this game (which is no great surprise given the Hand Made Software track record in this area). But the visuals are bright and worth mentioning as well. It’s worth hunting for footage of this game online to see what it looks like, including on this very site, where you can find out a lot about this unique title.

By the way, sharp eared Lynx players may not be able to help noticing that, when you lose a game in ‘Loopz’, there is a very familiar scream… isn’t that Jonathan Harker’s yell from Hand Made Software game ‘Dracula: The Undead’? :) Hey, it’s an oddly appropriate sound effect though! Pretty reminiscent of the classic ‘Klax’ scream when you drop a tile. I suppose you could say it’s halfway between a “rage-quit” scream and devastation... probably not what Harker was thinking about in ‘Dracula: The Undead’ then!

Hand Made Software produced some particularly fine Lynx games. It begs the question, was there anything else they produced that hit the cutting room floor? Nothing has emerged, but you never quite know what will turn up one day. Anything from these guys would certainly be welcome, either from the past or in the future!

Tune in next time for another Lynx game group profile, featuring a different company and their own particular cavalcade of releases. Maybe it will be an official release company, or an aftermarket group. What could it be?

Catch you next time to find out!

Tags: Game Developer, Profile
♥ Did we get something wrong or you have something to contribute? Please tell us about it!
You can find Atari Gamer on...
Be sure to follow for the latest Atari Lynx news, updates, stories and photos!
[ Don't show again ][ Dismiss ]
Loading...
10
Close