Getting started with writing code for the Atari Lynx is easy. There is a number of very good resources that explain how to get going - they step through examples and get you on the way to writing simple games. Alex Thissen's programming tutorial series is probably the most easy to follow. Then for more in-depth information the Atari Lynx Programming subforum on AtariAge is a very good resource. However something that isn't covered in detail is how to set up and compile Atari Lynx code on a Mac. That's where this tutorial comes in. 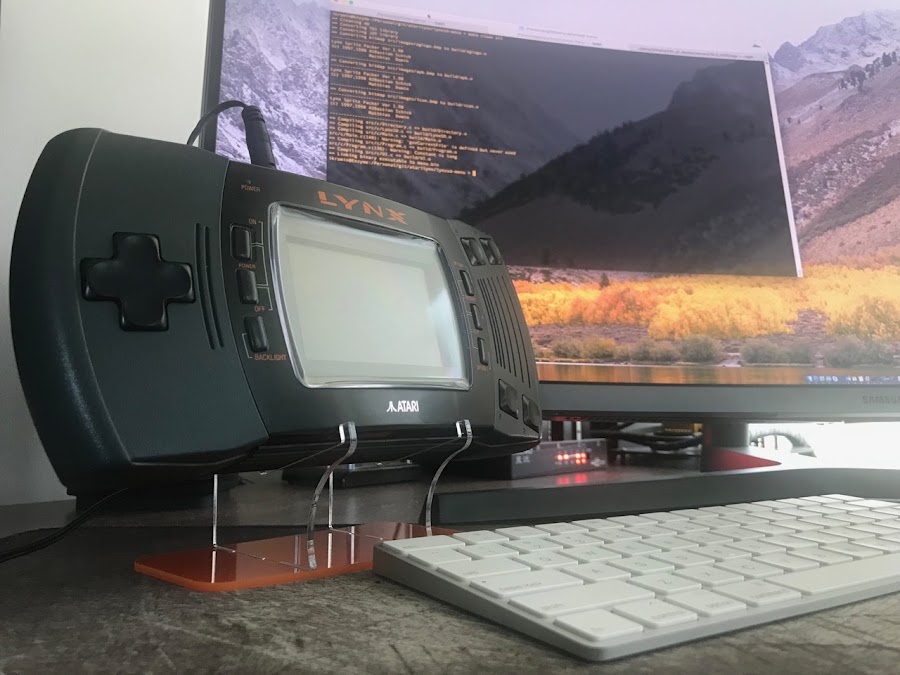 This tutorial will tutorial assumes that you are already familiar with Lynx programming and simply want to start building your code on a Mac. The tutorial is a part of a series that will cover aspects of Lynx programming that haven't been covered in other places.

Since there is no release version of CC65 available for the Mac, you have to build your own. This requires that Xcode with development tools is set up first, this blog post covers that aspect.

Building CC65 is simple. This tutorial will assume that all of the development tools involved are going to reside in the /Applications/devtools directory. So the first step is to make sure the directory exists and clone the CC65 repository using git. This is all done via the Terminal application.

Once all the code is downloaded it's time to build CC65 using make.

If everything went well there should be no errors and CC65 and all its tools should have been compiled. At this point Lynx code can be compiled, but first there are a few extra items to take care of to make life easier.

Just the compiler is all well and good but in most cases you will need some additional tooling, especially if you are trying to build code that's out there already. One of the most frequently used tools is sprpck by Bastian Schick. There is no binary release version of it, in fact the original v1.97 source code won't build on a Mac, but there is a way to do it.

There is a "forked" version 1.98 of the tool over at GitHub that has been updated specifically to build on a Mac. It can be found here - https://github.com/kateflower/sprpck. There is no functional difference between the 1.97 and 1.98 versions apart from Mac compatibility. So lets clone, then build it...

Again if no errors are displayed, sprpck is built and ready to use. Note that CC65 comes with its own sp65 image tool which will be covered in more detail in the future.

This is done by adding some code to end of the ~/.profile file. The easiest way to do this is via the command line...

Add the following lines to the end of the file...

For these changes to take effect you need to close and re-open the Terminal app (or just the current tab).

Go Forth and Code

Now you should have everything you need to get started with simple game coding on the Lynx. It pays to get familiar with CC65 documentation and especially its Atari Lynx specific information section. Be sure to go through all of Alex's tutorials and have a look at the demo part of the Atari Gamer GitHub repository for some Lynx code examples.

This tutorial series will keep getting expanded so check back for more content soon.

-AG
Tags: How To, Programming, Tutorial
♥ Did we get something wrong or you have something to contribute? Please tell us about it!
Did you like what you just read? Please take a moment to see how you can support Atari Gamer. With your help we can keep this retro gaming website going and develop new content! Or just check out what else we have for you...
You can find Atari Gamer on...
Be sure to follow for the latest Atari Lynx news, updates, stories and photos!
[ Don't show again ][ Dismiss ]
Loading...
10
Close