Quadromania for Atari Lynx was released in April of 2019, but it's not a new game by any means. The game itself was conceived and developed back in 1993 just as the Atari era for the Lynx was in its conclusion. The game was forgotten and never published by Atari. Then in 2014 Alex Thissen found it and after some work the game was finally released via Luch Soft. 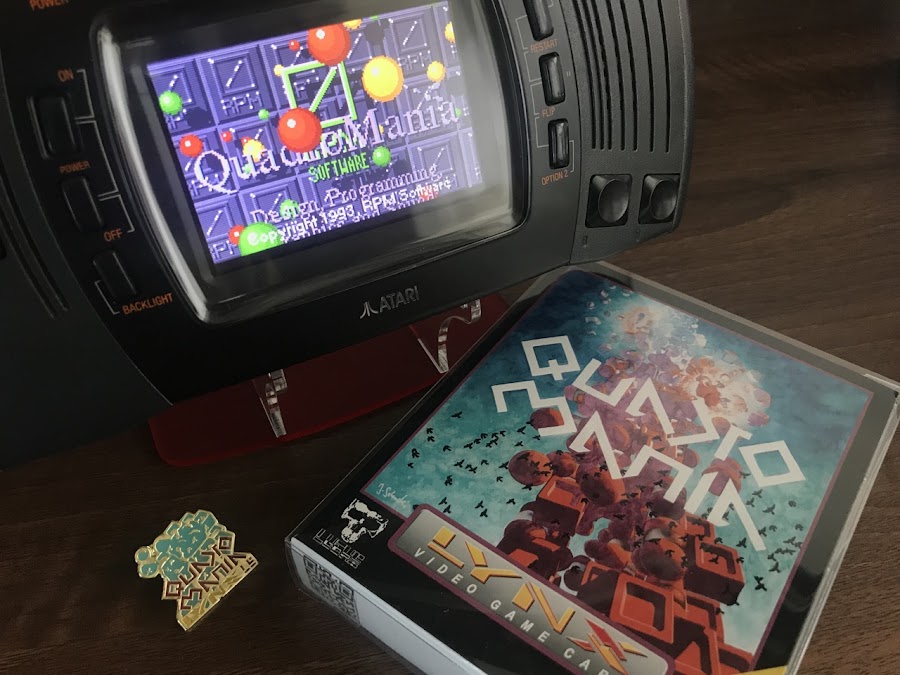 The game was originally planned to be released by Alex and collaborators in 2014. Here's (a slightly edited version of) what he had to say back then...

When I acquired the Pinky/Mandy set from Robert Maidorn it included everything from the original set, plus backups of his work. Robert had acquired the Epyx SDK and bought himself an Amiga 2000 to create games for the Lynx. He coded Quadromania (also called Quattro in earlier incarnations) in 6502 assembly code using the Epyx development tools. A gigantic achievement if you ask me, as he had no prior experience with the devkit.

The completed game was submitted to Atari for quality screening and triage for a release. Atari liked it enough to intend to release it. But, in 1993 it never came to that for reasons known when you look at the last release date of an official Atari (Lynx) game. The code was b﻿acked up, and stored alongside the Amiga and Epyx dev kit, when his brother did an interest check in 2012.

We came in contact, worked out the details, missed the 2012 holiday season when Robert's family was in Europe for Christmas time. The Epyx dev kit was located in Europe, but without a working Amiga. When everything was shipped to me at th﻿e end of 2013/early 2014, I inspected the backup set and was able to reconstruct (most, but not all) parts of the source code, plus some graphics work, and the compiled code. The compiled code was not a runnable binary, but with the help of Harry Dodgson I was able to get it to run and saw that it was a complete game. I wrote some encryption tools to help out with the signatures of the binary, in order to get it to run on a real Lynx. It need the encrypted header and the correct checksum for that to work. I managed to do that with my own Amiga where I installed the dev kit, and the self-created tooling.

The result was a game that would run on a PCB in a Lynx 1 and 2. It is a complete game in Dr. Mario style, which resembles Columns﻿ somewhat. Robert has given me full rights to publish the game, with no restrictions on my part. I thought it would be appropriate to release it this fall to celebrate the 25th anniversary of the Lynx. It will be published as is, because I think it honors Robert's hard work the best. I co﻿uld alter it, yet will not do that for the same reason. Even so, I inte﻿﻿nd to spend some time to reconst﻿ruct the source code. It is complete except for (possibly) some sound files. In the meantime, the compiled RO﻿M image will be what is available. There is no multi-player option available. Also, I will not release﻿ the source﻿﻿ code or the ROM image. I migh﻿t personalize ﻿﻿﻿ea﻿ch ﻿(binary) co﻿﻿py of the game, so﻿ each one is un﻿ique.﻿﻿

A Columns / Dr Mario style game back in 1993 would have been great. It's still great now because there aren't any full featured Tetris/Falling Bricks games for the Lynx. The game looks great, the gameplay is fun, but there is no music (more on this later). The release version comes in a standard Atari Lynx style box, includes a lapel pin and a poster and the cartridge is a 3D printed curved lip style cart. It's available for purchase from the Luchs Soft Shop.

So Alex's plans to release the game back in 2014 didn't exactly work out. There was a small batch of boxes and cartridges produced but never really for distribution. Things went quiet for a few years after that and many probably thought that was the end.

However in January of 2019, Luchs Soft announced that Quadromania is being released. This was a great development for the game. Being a Luchs Soft release meant that it would come in a professionally made Lynx style box and would have a pin and poster too. The artwork for this release was going to be made by Jacek Selanski which always looks simply amazing. There was a small catch however, the earlier version of the game had copyrighted music and had to be removed before the game could be published.

So that explains the lack of music in the final release of the game, but even without it the game is very nice. If you want something that feels like a Tetris style game with a Columns/Dr Mario twist, this is for you. It's certainly a fun way to pass the time!

Information for this article came from Alex's post over at Atari Age as well as conversations that Atari Gamer had with Alex, Luchs Soft and Jacek.

-AG
Tags: Game Review, Homebrew Games
♥ Did we get something wrong or you have something to contribute? Please tell us about it!
You can find Atari Gamer on...
Be sure to follow for the latest Atari Lynx news, updates, stories and photos!
[ Don't show again ][ Dismiss ]
Loading...
10
Close