2018 has been a great year for Atari Lynx homebrew game announcements and they just keep on rolling in. This time it's a Joust-Donkey-Kong-like game called Bentley Bear's Honey Hunt. The game is almost complete and may be published by Luchs Soft - another great title to their already impressive line up of Atari Lynx games.

AtariGamer reached out to Benjamin Mewes, the developer of the game to find out his inspirations, see what's going on behind the scenes and to ask a few other interesting questions, so lets see what Ben had to say... 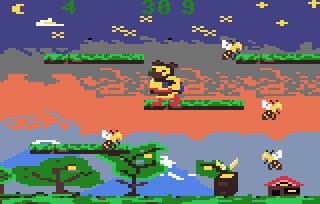 AG> What made you decide to make a game for Atari Lynx now in 2018?

BM> For my PhD project (Hydroinformatics) I needed to code a sprite based program. Because I forgot most of my C skills I gained back in the days, I needed to refresh them: I wanted to program a little game for a retro console. The Atari Lynx is kind of a beast, especially for its time! Moreover, the documentation is great and the community is lovely. Hence, I decided to give it a go!

AG> What are the games that were used as inspiration for your game?

BM> I think it is a mixture between Donkey Kong and Joust!. As a beekeeper, I really love honey and bees. So, it was natural to go for this as setting for my first game.

AG> Have you done any previous game development?

BM> I worked for a Macintosh software publisher Application Systems Heidelberg. They are also known for a lot of Atari based stuff for the ST computers. In the last decade they switched to game publishing with a strong focus on adventure games like Nelly Cootalot, Unforeseen Incidents and Lamplight City. In these projects I helped to test, play and coordinate some press work.

AG> What tools are you using to code your game?

BM> I write completely in C with the Tiny Sprite Editor. For testing I use the Handy emulator. Right now, I don’t have a SD cart to test it on my Lynx 1. I will need Beta testers to try it on real hardware. But this downside of my programming environment will change in the future!

AG> Are you also doing the game graphics and artwork?

BM> Yes, all graphics you see were created by me. For artwork I will ask a friend of mine, who does a lot of illustration.

AG> Is this going to be a commercially available game?

BM> I will sell the game to cover my costs. My main goal is to finance a SD cart, a McWill mod and a dinner with my girlfriend. So nothing to get rich from 😉

AG> You mentioned that there will be a digital release, how do you plan to address piracy?

BM> Yes, Bentley Bear will be the first Atari Lynx game to be sold digitally (as a LNX file). The final version will cover a Lynx compatible way to avoid piracy, stay tuned for that 😉 Nevertheless, giving me money just supports a very small-scale development project so I hope on honesty of the community.

AG> Any plans for future games?

BM> A classic jump’n’run would be nice as well as a good miniature golf game.

And to finish off here are a few more screenshots of Bentley Bear's Honey Hunt... 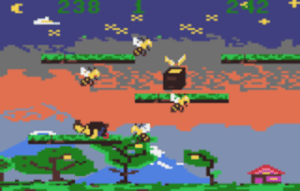 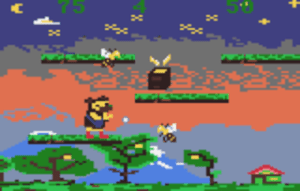 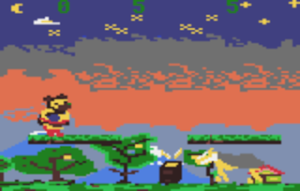 This game is certainly an exciting addition to the ever-growing library of homebrew titles for the Atari Lynx. Atari Gamer will be helping out with play testing of Bentley Bear and will continue to provide updates on its development. Keep an eye out for it!

-AG
Tags: Announcement, Interview, New Game
♥ Did we get something wrong or you have something to contribute? Please tell us about it!
You can find Atari Gamer on...
Be sure to follow for the latest Atari Lynx news, updates, stories and photos!
[ Don't show again ][ Dismiss ]
Loading...
10
Close