Animasia is a French annual event held in Bordeaux, dedicated to the Asiatic cultures, of course manga, anime, video games, J-POP and K-POP, but also gastronomy, calligraphy, clothing, etc. Every year, thousands of people come to the event to participate and attend various cosplays, conferences, and contests.

After cancellation of the 2020 Edition due to COVID-19, the 2021 Edition was, for many of us, the first convention and public meeting in months. It was so good to meet people again, to speak about our passions in person, and not via a keyboard or a webcam. So lets check out our (Yastuna Games) experience from this year's event...

This article is written by Frédéric Descharmes from Yastuna Games and edited by Atari Gamer.

Indie Beard Com hosts the Indie Game Factory (IGF) at Animasia. This is a space dedicated to indie game developers and publishers to show off their work. This year, a new homebrew corner made its first appearance inside the IGF. This was a unique occasion for us to showcase our games, and share the joy playing on the Atari Lynx and Nintendo Game Boy. We weren't the only publisher there from the French homebrew scene. Broke Studio was also there; they're one of the most important publishers in the NES homebrew scene, and also have some games for Megadrive / Genesis. If you are looking for (very) good games for your NES/Megadrive, you have to check them out. 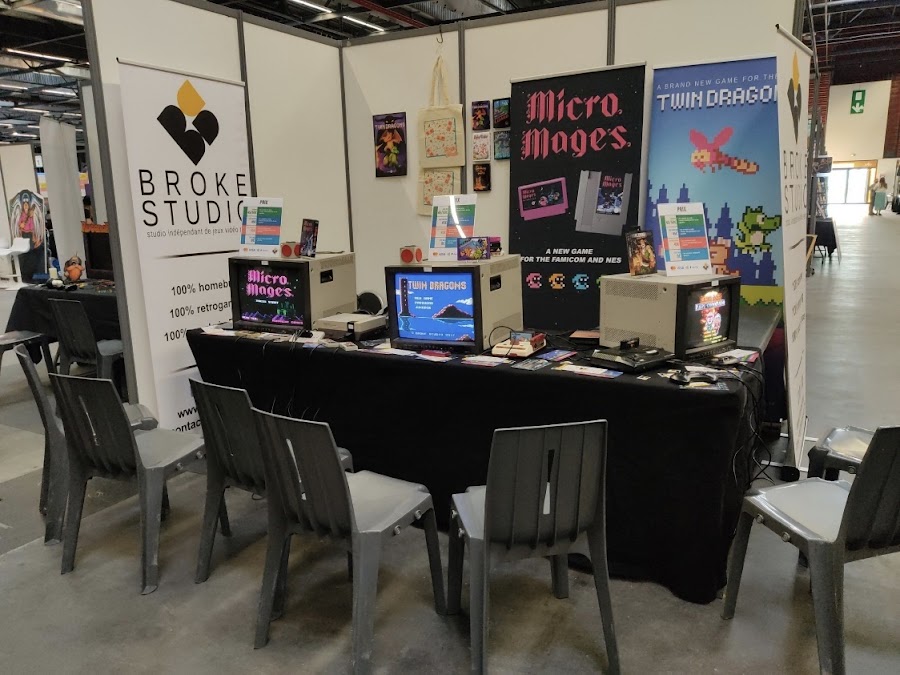 The Broke Studio stand before the opening. Soon, lots of players will discover the joy of 4 players Micro Mages action!

Yastuna Games was featured at the main homebrew stand, alongside Dale Coop, SJ Games and the upcoming Super Tilt Bro. game from Roger Bidon (Sylvain Gadrat). Super Tilt Bro. is a de-make of the Super Smash Bros series for the Nintendo NES. Comparing Super Tilt Bro. to Super Smash Bros, 3 things come in mind: intense action and fun (it’s in this game definitely), 4 player action (well, it is only a 2 player right now, and still not decided if 4 players is possible) and of course online gaming (you know what: this is for real and amazing, keep reading...).

For the first time in NES history, a game is playable over WiFi between 2 NESs. This is possible via the genius of Antoine Gohin from Broke Studio (PCB engineering) and Sylvain Gadrat (the author). Antoine added a WiFi chip to his NES PCB prototypes and they wrote the network stack so the console can connect to the Internet. Sylvain wrote a dedicated server to host games. The server registers games, so you can see a replay of your best victories. As a bonus, this game is also playable via a HTML5 embedded emulator on PC, and can cross-match with real (physical) consoles. The game is only available in beta form on PC emulator right now, but the Kickstarter for the NES version should start next year. 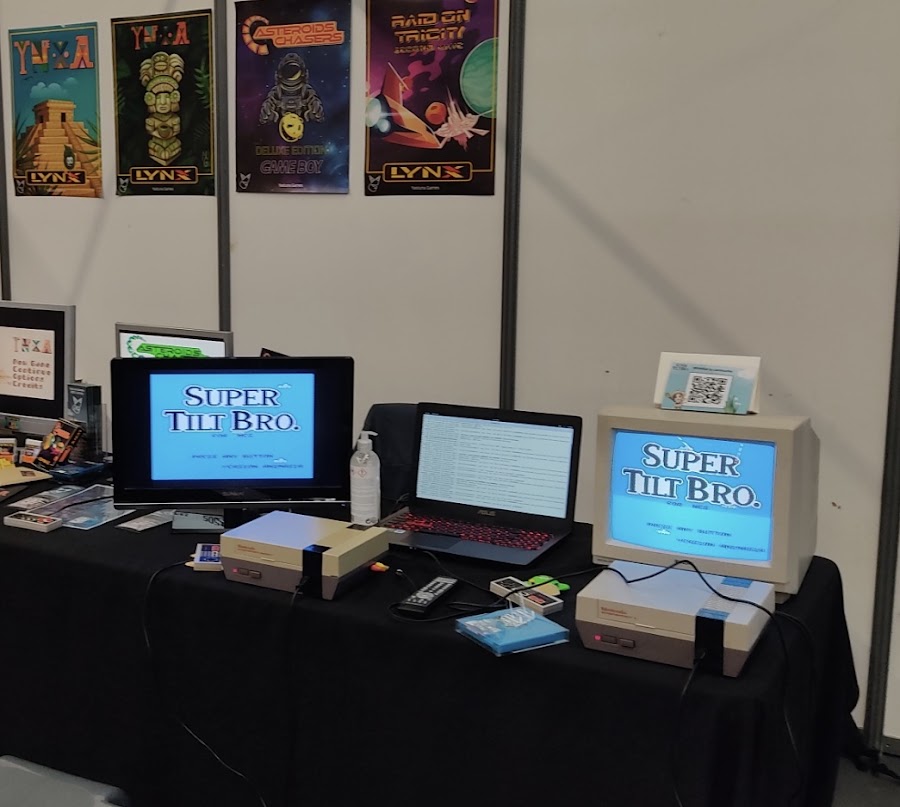 2 NES with prototype cartridges, connected by WiFi to the laptop for demonstration purposes 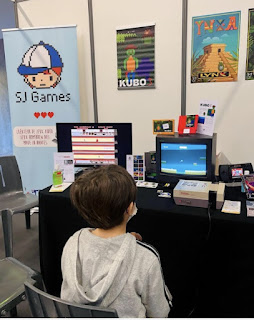 Dale Coop is a prolific NES developer, you will often see him credited in other developers' games too. He is one of those NES Maker wizards that can push the tool beyond its limits. His most recent game is Zdey, made in collaboration with a French street artist. He is also the proud father of Seiji from SJ games, probably the youngest NES developer (at least in France). At the age of 7, Seiji, is the author of Kubo 3.

Kubo 3 is a nice adventure game featuring a cowboy turtle. In the game, you have to explore 4 worlds in order to get all the crystals to enter the castle in the final world. Saying it like this, it may sound like an improbable mix of many things, but the game has this classic touch that makes it feel like an instant hit. Each world has its own gameplay rules, everything has been tested well, and thought out to the extreme. Seiji made a very nice design for his game, and we're eager to see his future productions.

You can download Kubo 3 or buy a cartridge via this link. You can also play Kubo 3 on the Evercade Indie Heroes cartridge.

Our stand changed themes throughout the event. On the Saturday, the Yastuna Games stand was dedicated to YNXA on the Atari Lynx and Asteroids Chasers on Game Boy.

YNXA is a new game coming to the Atari Lynx very soon. It's an expanded version of the game that was entered into the Atari Gamer contest for the 30th Atari Lynx Birthday. It's a puzzle platformer, with a great deal of exploration. You play as Leaf, the avatar of the spirit of Air, but you're also able to transform to spirits of Fire and Water. As you play the game, you will gain these additional powers and will have to pick which one to use wisely to make progress through the game. The game features a Prologue level, where you gain the powers for each of the spirit forms. In the main part of the game, you will have to prove your bravery in the Temple of Perseverance, and the final part, a big "open world" level below the Pyramid where you will have to collect 5 ceremonial objects in order to unlock the final exit.

The first person to play Ynxa was Seiji. He went through the entire Prologue part of the game (so around 40 minutes), and really enjoyed it. The next day, he played the whole Prologue again. He really liked the game, and spoke lots about it. Maybe not enough to convince Dale Coop to buy an Atari Lynx, but it was very close.

After Seiji, many other players (young people and adults) tried the game, going though the Prologue. Some of them also completed levels in the Temple of Perseverance. It was great to see that the game pleased people, and that they could sit for more than half an hour in front of the game, despite the many other attractions at the event. I even received feedback on level design and some players found some bugs, which was a very good outcome for showing off this early version of the game.

For me, the best moment of the show was when the mother of a little boy asked me if the only way to play the game was to buy an Atari Lynx, and how to get one. She was so happy to see her boy enjoying the game that she considered buying another console for one homebrew game (he already has a Switch, 3DS, etc). 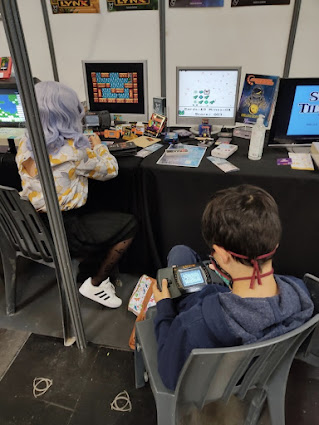 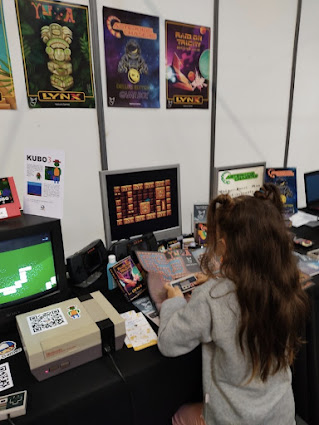 The Ynxa Map pack was very usefull to guide players without telling them what to do. Some players used it maybe too much!

On the other side of our display booth, Asteroids Chasers was harder to promote. Quite a lot of people stopped by to check out the Game Boy version because it's more popular than the Lynx, but the game is non-trivial and requires some explanation. In a noisy environment of a convention, it was hard to get people to stop, listen and play. One boy really enjoyed the game and played more than ten games in a row, but I must admit this kind of game is not made to be shown off at this kind of exhibition.

Raid on TriCity and RED🕸

On Sunday, I decided to switch between Raid on TriCity - Second Wave and RED (the Lynxmas contest edition) on the second screen. Raid on TriCity was more successful than Asteroids Chasers, but most players wanted to shoot everything in sight instead of building lines. Overall it was a crowd pleaser however. RED by LordKraken, available in the LynxMas 2020 compilation (from the Atari Gamer and Yastuna Games online stores) was an instant hit.

RED is a hard game, with 30 levels. It's easy to start with but hard to master. One boy stopped at level 21, whereas a girl went through all the levels. A more complete and enhanced version of RED is in works, once more information is available, Atari Gamer will have a news update about it. 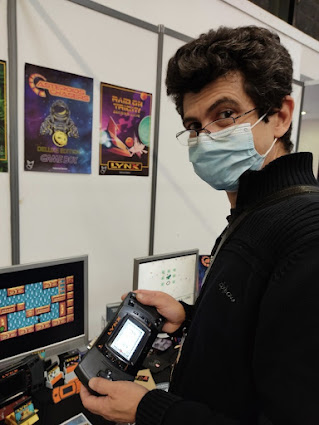 Frédérick Raynal (Alone in the Dark, Little Big Adventure, 2Dark, …) playing RED. He was present at the show as speaker and guest star and came to discuss with us. He promised to repair his Lynx and check the Yastuna Games shop 😉 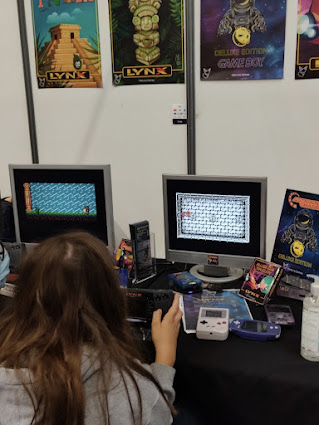 This girl went through all of the levels of RED

So that wraps up Animasia 2021. Overall it was a successful event for Yastuna Games. People played our games, they had fun and we learned from the experience too. Don't forget to check out our store that has all of our current and pre-order games available for purchase! 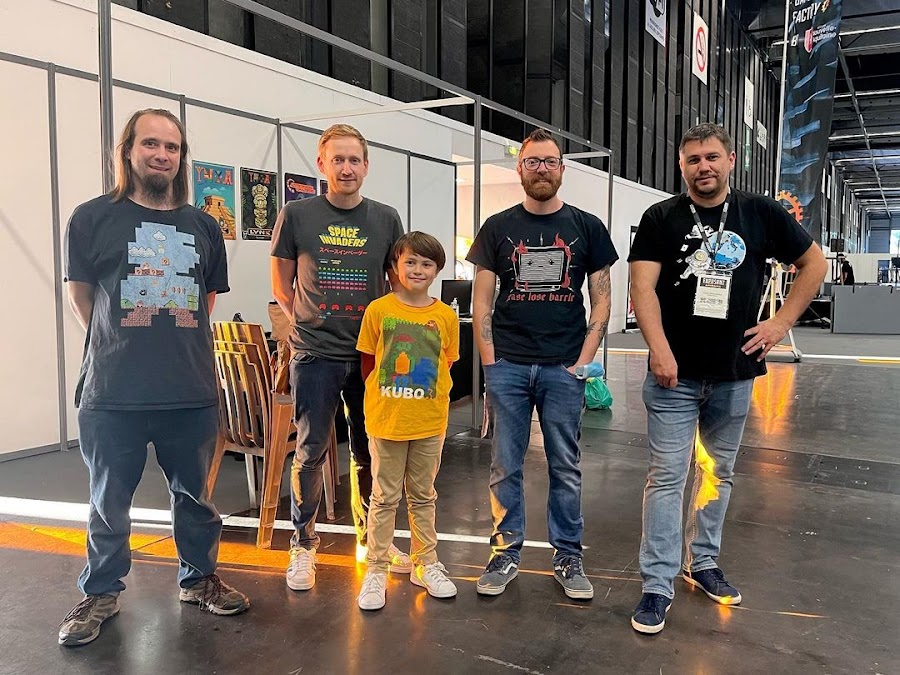 Meet the home brewers - from left to right: Sylvain Gadrat/roger_bidon (Super Tilt Bro.), Dale Coop, Seiji, Antoine Gohin (Broke Studio), Me (Frédéric Descharmes - Yastuna Games). Original photo posted at https://www.instagram.com/p/CU7J1gmgcOa/
Tags: Animasia, Yastuna Games
♥ Did we get something wrong or you have something to contribute? Please tell us about it!
You can find Atari Gamer on...
Be sure to follow for the latest Atari Lynx news, updates, stories and photos!
[ Don't show again ][ Dismiss ]
Loading...
10
Close