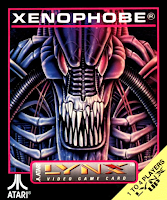 Ever since the Alien movies by Ridley Scott, the entertainment industry has been obsessed with deadly space creatures and those humans who are brave enough to face them. Me, I love that stuff, especially in video games. And so when arcade classic ‘Xenophobe’ arrives on the scene for the Lynx, you hope you’re going to be in for a rollicking, alien-busting good time. Thankfully, what we have here is probably the best conversion of the arcade game that’s ever been seen on any console. Yes, it’s really that good!

The name of the game in ‘Xenophobe’ is ending an alien infestation across diverse interplanetary space stations. You can choose your heroic character (they’re a weird group) and then you are more-or-less plonked straight into the action. Hope you are ready! You’ll have to be, because in each stage you either have to (a) destroy all alien lifeforms on board, or (b) set the self-destruct sequence and be transported back to the main base (no bonus points for doing that). Alternatively, of course, you might just die at the hands of some fairly hideous alien creatures. Try to avoid that last option if you can!

Graphically, ‘Xenophobe’ is a fantastic representation of the arcade game. Your sprite is nice and big, all aliens are visible, and the backgrounds are often beautifully animated. Look out for special touches like computer screens, mini robots and see-through lifts. Oh, and there’s more. Want awesome introductory scenes? Check! Want nice looking weaponry and items? Check! The sheer range of foes is fantastic; you’re always bumping into something bizarre and dangerous. Visually, the whole game is cartoony in look, and there’s also a fair bit of humour involved. The humanoid-looking aliens that poke their heads around doorways are both terrifying and hilarious. Being both scary and funny at the same time is a surprisingly good combination, because the “look” of the game makes it always inviting to play on any occasion.

Sound-wise, the game also shines. Man there are some odd sounds coming out of your speakers, but they are incredibly unique effects. This makes ‘Xenophobe’ a joy to play because you know that you haven’t heard a lot of these sound effects on a Lynx before. Aliens sound strange, guns blast and doors explode with big volume. Behind the action is a simple but effective musical theme which is largely just a drum machine. But that’s perfectly fine, because there’s so much going on that you will need to identify each of the sounds entering the scene. That’s the kind of game ‘Xenophobe’ is; you need to be attune to what is going on at all times, including aurally.

Your character is very easy to control around the diverse space stations you travel through. You’ll need to be quick with your hands, because there are often huge quantities of aliens on screen and you’ll need to be speedy in taking them out and picking up the various items that litter the various floors. As well as shooting and walking, you can also jump and aim your gun. Items can also be used, and this is always easy to negotiate. Need a jetpack? Want to toss a bomb? It’s all smooth enough to perform. You’ll need to be pretty adept to leap some of the various pits, and know when to destroy a door or not. Thankfully, this skill can be built over time.

When it comes to gameplay, ‘Xenophobe’ is a very cool and different experience. There’s nothing really like it on the Lynx, but I suppose the closest comparison you could make would be the Lynx game ‘Slime World’. Both titles are about clearing diverse rooms of alien life and using special items. But where ‘Slime World’ had you travelling through vast contained areas, ‘Xenophobe’ corridors are much more confined and claustrophobic. This makes the action more tightly packed and stressful, and your survival arguably more difficult. You often have to travel multiple floors by lift, and you’ll face electrocution traps, tentacles, rolly-polly aliens and much more. And unlike ‘Slime World’, there’s certainly no infinite lives for your fave character in this game, and it’s similarly tough as nails to complete.

The challenge factor is worth addressing, and it’s something I find myself addressing many times with Lynx arcade coin-op conversions. The issue I find time and time again is how LONG you must play the game (23 levels) without any kind of save feature. Now, purists will say “That’s just like the arcade and is the way it should be” and that’s an understandable argument. However, the fact is that this is a game which, like ‘Rampage’, requires a very large investment of time with no password feature, which means you need to start all over again every game.

But then...here’s the crazy thing in THIS particular case: ‘Xenophobe’ seems to actually, surprisingly, get around the restart issue. Why? Because it’s got really strong features as a game; it’s continuously funny, the stages vary enormously, and there are multiple strategies to use in order to meet your mission objectives. I never actually got tired of coming back to this game again and again even after I died, and I found that kind of incredible. Like ‘Rampart’, you need to think carefully about where you do your attacks and when you push the station destruct button. ‘Xenophobe’ truly has enough quality content to overcome the lack of save feature, even though this is something that would have really helped this game overall (even if the password was every five stages or so a la ‘Dinolympics’).

In conclusion, there’s a really fantastic game here, and one that is really individual in how it is presented, in how it plays, and in how you can approach it. It loses a few marks because of the constant starting at the beginning each time you play, but it’s such a strong title that you likely won’t care about having to restart. I loved every bit of the exploration, the finding of weird alien species, and the special items you can gain. There’s no reason why you shouldn’t pick up this Lynx classic whenever you see it; especially if you are a sci-fi fan. What are you waiting for?