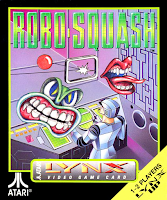 Imagine if all the crucial world decisions at the G8 summit were decided by a game of Pong. That’s the future vision of ‘Robosquash’, a game which promises leadership of the universe to a person who wins a game of intergalactic paddleball. That’s you. So you grab a seat, wrestle with the computerised interface, and get robosquashing!

This interesting Lynx-only game carries out the age old strategy of updating a classic. Seen Lynx ‘Blockout’? It's a bit like ‘Tetris’, but in 3D. ‘Robosquash’ does the same thing; it’s like ‘Pong’ in three dimensions, but there’s a lot more to it than just hitting a ball with a bat (though that does account for much of the game). In fact, the little story and experiences this game tries to create really enhance it far more than expected, given it is really a graphically updated adaptation of an old arcade classic.

How is the game played? Winning can be achieved in two main ways. You have to either (1) take out all the targets (blocks) in each battlefield and hit the “end of level spider” or (2) cause your opponent to miss the ball with their paddle three times; whichever comes first. Miss the ball three times, and you get squashed! ‘Robosquash’ does a good job of adding some interesting gameplay elements to make action interesting, from the afore-mentioned game-changing powerups to being strategic with how you choose your battlefields. And also... if a ball splats on your screen, you can’t wipe off the splash; you’ll have to try your best to predict the ball physics and attempt to play on: tricky!

Don’t expect a great deal from the graphics in ‘Robosquash’. They do the job, but they keep things pretty simple. On a sparse black backdrop, you’ll see the various blocks and even some items and monsters (powerups) in the Robosquash “stadium”. Then a red ball gets launched at you, and you must move your see-through paddle over to it in order to whack it back. This feels kind of like an air hockey table, actually; with weird creatures in the way! Some nice visual effects accompany the action, with powerups temporarily zooming in as you hit them with the ball (which is the only way to retrieve them). Other than that, simple graphics represent the rest of the game. There is a very cool title sequence and demo tutorial though, and it’s well worth watching it if you’re too lazy to read the instructions (which I was the first time around!)

Sound, also, is kept to a simple level but it is nice enough and is never annoying or inappropriate. There are a series of bumps, thumps and shattering sounds as you hit the ball around and break through objects on-screen. Honestly, this kind of game would really benefit from a ‘Klax’ level collection of sound effects, with that game being the firm benchmark for audio on the Lynx. But there’s nothing to complain about in terms of audio as you play, and you’ll find the game quite relaxing to play for that reason.

With games that demand accuracy, good controls are crucial. Thankfully, the controls in ‘Robosquash’ are mostly very good. It was always going to be tricky to carry out a paddleboard game with a d-pad, but this game more-or-less accomplishes that. There are certainly times where you might slip your thumb on the controls and miss a ball once or twice, but it doesn’t happen half as often as you’d think. Part of this comes down to the excellent collision detection, where you feel as if the game never cheats you regarding ball contact with the paddle. It’s actually pretty generous. The ball is mostly very visible, and you can even spin it a bit if you hit it right. The physics are really well done. The buttons aren’t really used at all unless you pick up a fireball or “gripper” powerup, and when you get those, you’ll use them quite a lot!

As for the challenge and replay value of ‘Robosquash’, it’s surprisingly high. The game has multiple difficulty levels, and even easy (or “Klutz” as the game calls it) is tricky to beat. The fact that each of the game battlefields is very different gives the game some good variety, and the powerups really make the game shine; you’ll experience the title in a whole new way once you’ve grabbed those. Even though the game is very much “pick up and play” in style, the fact that you need to win multiple matches and be strategic in your selection of playing fields will keep things interesting for longer plays. Honestly, I didn’t mind this game as a “short bursts” kind of title, but I was content also to sit for a while and try to conquer it with a longplay. Not easy! The harder difficulty levels should keep happy any ‘Robosquash’ player who likes a challenge, but it’s simple enough for younger players to pick up the game too.

I’m not going to say that ‘Robosquash’ is the most exciting game on the Lynx or the most revolutionary. But it is a solid, fun and challenging experience which is more like an arcade play than the puzzle game I expected it to be. The game works, because it’s a perfect temporary time-waster as well as a satisfying longer play experience. I’m surprised it hasn’t been adapted for multiple consoles, because it would have worked great with the Nintendo Wii or even current VR experiences. In all, I was pleasantly shocked out of my cynicism toward the box art and simple online screenshots, and taken into a Lynx gaming experience that replicated the great retro games of old... with a couple of neat new surprises. I recommend ‘Robosquash’ thoroughly. Splat!