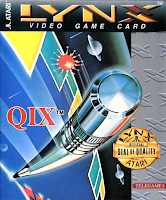 You can’t use the word ‘QIX’ in a scrabble game, but that IS the name for this highly unusual Lynx puzzle game. Why is this game unusual? Well, in QIX, you are essentially the master and controller of a small electronic cursor, which you must control in order to slice game boards into distinct ‘territories’, hopefully to trap the main enemy of the game. Then you progress to the next level. But beware the ever-present foes, named QIX and SPARX, who want to frag you! Got it?

QIX doesn’t try to sugarcoat the game experience for players. QIX just IS. It’s a game that has seen versions across diverse consoles; including, yes, the Amiga - that old desktop computer where so many Lynx games are derived from. The graphical interface is nicely presented, but this is a game where things are kept straightforward, pleasant and functional as they are. Nothing spectacular is seen here. Like ‘Shanghai’, there’s not much whizz-bang you could really bring to a game like this.

What you do get are some nice bright colours. The QIX main foe (Qix) is a nice mess of rainbow pixels, designed to meander around the screen in a jaunting kind of way in order to ruin your game. The smaller SPARX are small, but easily visible. I did like the coloured patterns that are created when the player starts capturing territory, but I would have preferred some artistic still images or paintings instead (such as the cutscenes present on Lynx game ‘Hanoi’). That’s a minor quibble though (to use another ‘q’ word).

The sound effects in QIX are, again, nothing to write home about. The title musical theme is great, but other than that, QIX has no in-game music aside from a few fanfare jingles. There is a constant in-game ‘hum’ (which never gets grating) and the various retro digital effects as you play, which are passable enough. My argument which I always return to is, really, puzzlers with simple graphics like this REALLY benefit from in-game atmospheric music; which is sadly not present here. ‘Loopz’ is a good example of how this can be done well. Still, there’s little to complain about the audio experience overall. It’s just not ground-breaking, in any sense of the word.

Which leads me to discussing the gameplay, and this is one of the quintessential QIX quandaries (okay I TRIED to do that ‘q’ oriented sentence!) You will either love it or hate QIX. You see, while it is enjoyable as a Lynx puzzler, it’s kind of a middle-of-the-road experience. It’s not going to blow you away. Whilst the controls are easy to master, and the premise is original, the actual gameplay doesn’t grab you like classic Lynx puzzlers. It will test the reflexes. It will boost your gaming skills. But if I compared it to the frantic platforming experience of ‘Joust’... the chaotic shooting action of ‘Robotron 2084’... or the taxing dynamics of ‘Chip’s Challenge’... the unchanging style of ‘QIX’ just doesn’t present the same level of excitement or immersion as other Lynx puzzler luminaries. QIX is challenging enough, and the in-game stats are fun to analyse, but it can feel fairly formulaic after a brief time, which is unfortunate.

Is ‘QIX’a bad game? Not at all. Is it an exciting game that will absorb you for hours on end? Probably not, unless you are a rusted-on ‘QIX’ fan (in which case you may love it). From my own viewpoint, I'd say there are many other Lynx puzzlers with better "bang for your buck" than this obe. But ‘QIX’ is at least worthy of a good pass grade, because there’s essentially nothing wrong with it; it just lacks something to give it leverage over the Lynx puzzling competition. I give the game an extra half-mark for being a faithful translation, though; that's an area the Lynx can always be counted on for!

My advice? Give QIX a go and see if it sets off some SPARX! Okay, one joke too many; I’ll see my own way out…